The Ecuadorian Air Force (Spanish: Fuerza Aérea Ecuatoriana, FAE) is the Air arm of the Military of Ecuador and responsible for the protection of the Ecuadorian airspace.

To develop the military air wing, in order to execute institutional objectives which guarantee sovereignty and contribute towards the nation's security and development.

To be a dissuasive Air Force, respected and accepted by society, pioneering within the nation's "air-space" development.

The FAE was officially created on October 27, 1920. However, like in many other countries, military flying activity started before the formal date of birth of the Air Force. The history of Ecuador is marked by many skirmishes with its neighbour Peru. As a direct result of the 1910 Ecuador-Peru crisis the members of Club de Tiro Guayaquil decided to expand their sporting activities into aviation as well. Renamed Club de Tiro y Aviación, they started an aviation school.[citation needed] Cosme Rennella Barbatto, an Italian living in Guayaquil, was one of the very first members of Club de Tiro y Aviación. In 1912 Cosme Rennella was sent to his native Italy for training where he successfully graduated as a pilot. He later returned to Europe a second time in 1915, where he participated in World War I.[2] In 152 combat sorties he scored 18 victories, although only 7 were confirmed. When he returned to Ecuador, his experiences served as motivation for a reduced group of Ecuadorian pilots, who moves to the Aviation School in Turin, Italy, with the objective of graduating as the first Ecuadorian pilots of the nascent Ecuadorian Military Aviation.

By 1939 the Ecuadorian Air Force was still limited to about 30 aircraft and a staff of about 60, including 10 officers.[3] Military aviation did not start in earnest until the early forties when an Ecuadorian mission to the United States resulted in the delivery of an assortment of aircraft for the Aviation school at Salinas. Three Ryan PT-22 Recruits, six Curtiss-Wright CW-22 Falcons, six Fairchild PT-19A Cornells and three North American AT-6A Harvards arrived in March 1942, considerably boosting the capacity of the Escuela de Aviación at Salinas.

The 1950s and 1960s saw a further necessary buildup of the air force, gaining more units and aircraft. Meanwhile efforts were made in enhancing the facilities at various airbases. In May 1961 the "First Air Zone" with its subordinate unit Ala de Transportes No.11 was founded. The "Second Air Zone" controlled the units in the southern half of Ecuador, Ala de Combate No.21 at Taura, Ala de Rescate No.22' at Guayaquil and Ala de Combate No.23 at Manta as well as the Escuela Superior Militar de Aviación "Cosme Rennella B." (ESMA) at Salinas.

The Ala 11 has its own commercial branch, like in many other South-American countries, the Transporte Aérea Militar Ecuatoriana (TAME). Besides the military transport aircraft, it also uses commercial airliners. Flying to locations off the beaten track, TAME provides an additional service to the people of Ecuador.

The FAE saw action on several occasions. A continuous border dispute with Peru flared up in 1981 and 1995. The FAE managed to down several Peruvian aircraft during the latter conflict.[4][5] Today the FAE faces the war on drugs as well as many humanitarian and logistic missions into the Amazon-region of the country. Nevertheless, being a middle-income country and supporting a relatively large air force is a burden.

This is the current structure of the Ecuadorian Air Force:[6] 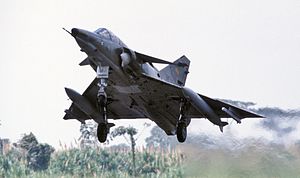 An Ecuadoran Kfir on takeoff during Exercise Blue Horizon '86 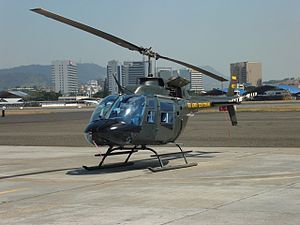