i/ˈeɪdəlvaɪs/), is a well-known mountain flower, belonging to the Asteraceae (the daisy or sunflower family).

The plant prefers rocky limestone places at about 1,800–3,000 metres (5,900–9,800 ft) altitude. It is non-toxic, and has been used traditionally in folk medicine as a remedy against abdominal and respiratory diseases. The dense hair appears to be an adaptation to high altitudes, protecting the plant from cold, aridity and ultraviolet radiation.[2] As a scarce, short-lived flower found in remote mountain areas, the plant has been used as a symbol for alpinism, for rugged beauty and purity associated with the Alps and Carpathians, and as a national symbol especially of Austria, Switzerland, Bulgaria and Romania. There is a folklore associated with the edelweiss in which it is stated that giving this flower as a gift to a loved one is a promise of dedication.

The common name is from the German word "Edelweiß" as a compound of edel "noble" and weiß "white."[3]

Edelweiß was one of several regional names for the plant, and entered wide usage during the first half of the 19th century, in the context of early Alpine tourism.[4] Alternative names include Chatzen-Talpen ("cat's paws"), and the older Wullbluomen ("wool flower," attested in the 16th century).[5][6]

The scientific name is a latinisation of the Greek leontopódion, "lion's paw."[7]

The first scientific name for Leontopodium alpinum which was validly published according to the current binomial nomenclature is Gnaphalium alpinum in the first edition (1753) of Linnaeus's Species Plantarum.

Leaves and flowers are covered with white hairs and appear woolly (tomentose). Flowering stalks of edelweiss can grow to a size of 3–20 centimetres (1–8 in) in the wild, or, up to 40 cm (16 in) in cultivation. Each bloom consists of five to six small yellow clustered spikelet-florets (5 mm, 3⁄16 in) surrounded by fuzzy white "petals" (technically, bracts) in a double-star formation. The flowers bloom between July and September.

Leontopodium sp. is a protected plant in many countries, including Mongolia, Bulgaria, Croatia, Switzerland (since 1878), France, Norway, Iran, India (Zanskar region), Italy, Serbia, Malaysia (In Genting and Cameron Highlands), Indonesia (In Semeru Mountain), Germany, Spain (Ordesa National Park), Poland and Slovakia (Tatra National Park), Slovenia (in Gorizia and Gradisca since 1896, in Carniola since 1898), Austria (since 1886) and Romania (since 1933).

Leontopodium alpinum is grown in gardens for its interesting inflorescence and silver foliage.[10] The plants are short lived and can be grown from seed.[11] 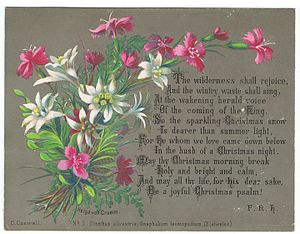 In the 19th century, the edelweiss became a symbol of the rugged purity of the Alpine region and of its native inhabitants.

Berthold Auerbach published a novel entitled Edelweiss in 1861, where the difficulty for an alpinist to acquire an edelweiss flower was exaggerated to the point of claiming that "the possession of one is a proof of unusual daring."[12] This idea at the time was becoming part of the popular mythology of early alpinism.[13] Auerbach's novel appeared in English translation in 1869, prefaced with a quote attributed to Ralph Waldo Emerson,

"There is a flower known to botanists, one of the same genus with our summer plant called 'Life-Everlasting', a Gnaphalium like that, which grows on the most inaccessible cliffs of the Tyrolese mountains, where the chamois dare hardly venture, and which the hunter, tempted by its beauty and by his love (for it is immensely valued by the Swiss maidens), climbs the cliffs to gather, and is sometimes found dead at the foot, with the flower in his hand. It is called by botanists the Gnaphalium leontopodium, but by the Swiss EDELWEISS, which signifies NOBLE PURITY."