Edgar Shannon Anderson (November 9, 1897 – June 18, 1969) was an American botanist. His 1949 book Introgressive Hybridization was an original and important contribution to botanical genetics.

Anderson was born in Forestville, New York, when he was three his family moved to East Lansing, Michigan where his father had accepted a position to teach dairy husbandry. In 1914 Anderson entered Michigan State College to study botany and horticulture. After completing his degree he joined the Naval Reserve and in 1919 he accepted a graduate position at the Bussey Institution of Harvard University. His studies were supervised by geneticist Edward Murray East and Anderson worked on the genetics of self-incompatibility in Nicotiana. He was awarded a master's degree in 1920 and a DSc in agricultural genetics in 1922. 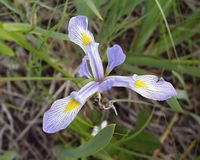 He accepted a position as a geneticist at the Missouri Botanical Garden and was appointed assistant professor of botany at Washington University in St. Louis. His research was focused on developing techniques to quantify geographic variation in Iris versicolor. In 1929 he received a fellowship to undertake studies at the John Innes Horticultural Institute in Britain, where he worked with cytogeneticist C. D. Darlington, statistician R. A. Fisher, and geneticist J. B. S. Haldane. Anderson's data set on three related species of irises was used by Fisher as an example with which to demonstrate statistical methods of classification and has subsequently become very well known in the machine learning community, though often described as Fisher's iris data. 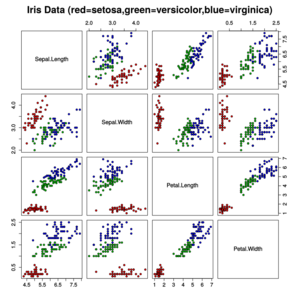 Anderson returned to the United States in 1931 and took a position at the Arnold Arboretum at Harvard where he worked with geneticist Karl Sax. In 1935 he returned to Missouri and in 1937 received the Engelmann Professorship in botany at Washington University. In 1941 he was invited to present the Jesup Lectures at Columbia University with Ernst Mayr, discussing the role of genetics on plant systematics, however unlike the other presenters of the Jesup Lectures who later wrote regarded as the foundation of the modern evolutionary synthesis, he never completed his accompanying manuscript.

He published Introgressive Hybridization in 1949 which described the role of introgression in speciation. He also wrote the popular science book Plants, Man, and Life which was published in 1952. He was briefly director of the Missouri Gardens in 1954, but returned to teaching in 1957. He retired officially in 1967.

Anderson was a close colleague and friend of Esther Lederberg [1]. They frequented the Cold Spring Harbor Symposia and had many other colleagues in common, such as J. B. S. Haldane.

Anderson was elected a Fellow of the American Academy of Arts and Sciences in 1934.[1] In 1954, He was an elected a member of the National Academy of Sciences.[2] He was also president of the Botanical Society of America, and was a charter member of the Society for the Study of Evolution and the Herb Society. He received the Darwin-Wallace Medal of the Linnean Society.

The standard author abbreviation E.S.Anderson is used to indicate this individual as the author when citing a botanical name.[3]