The edible dormouse or fat dormouse (Glis glis) is a large dormouse and the only living species in the genus Glis, found in most of western Europe.[3] Its name comes from the Romans, who ate them as a delicacy.

The edible dormouse is the largest of all dormice, being around 14 to 19 cm (5.5 to 7.5 in) in head-body length, plus a 11- to 13-cm-long tail. It normally weighs from 120 to 150 g (4.2 to 5.3 oz), but may almost double in weight immediately prior to hibernation. It has a generally squirrel-like body, with small ears, short legs, and large feet. Its fur is grey to greyish-brown in colour over most of the body, while the underparts and the inner surface of legs are white to pale buff; the line of demarcation is rather well defined.[4]

Unlike most other dormice, no dark markings are on the face, aside from faint rings around the eyes. The tail is long and bushy, with fur slightly darker than that on the body. Front feet have four digits and their hind feet have five. The soles of their feet are naked. Females have from four to six pairs of teats.[4]

The edible dormouse is capable of limited autotomy; if another animal grasps the tail, the skin breaks easily and slides off the underlying bone, allowing the dormouse to escape. The exposed vertebrae then break off and the wound heals over, forming a fresh brush of hair.[4]

The edible dormouse is found throughout much of mainland western Europe. It is also found on a number of Mediterranean islands, including Sardinia, Corsica, Sicily, and Crete.[5] It is rather more sparsely distributed through central Europe and the Balkans, but can be found as far north-east as the upper Volga River. Close to the Volga River were small groups of the species found at the Zhiguli Mountains, in Russia.[6] They are also found in the Caucasus region, and along the southern coast of the Caspian Sea.[4] Germany has a small population of edible dormice within its borders, ranging from two to six individuals per hectare.[7]

Beyond Europe, it is found in scattered populations throughout Thrace, located on the southeastern tip of the Balkan peninsula. In this region, two subspecies of the edible dormouse are found, G. g. glis and G. g. orientalis. Northern Anatolia has a different subspecies, G. g pindicus.[8]

It was accidentally introduced to the town of Tring in England through an escape from Lionel Walter Rothschild's private collection in 1902.[9] As a result, the British edible dormouse population, now 30,000 strong,[10][11] is concentrated in a 200-square-mile (520 km2) triangle between Beaconsfield, Aylesbury, and Luton, around the southeast side of the Chiltern Hills.[12]

Though this animal is regarded as a pest by some,[9] in the United Kingdom the Wildlife and Countryside Act 1981 prohibits certain methods of killing dormice, and removing them may require a licence.[11]

Edible dormice inhabit deciduous forests dominated by oak and beech, from sea level to the upper limits of such forests at 1,500 to 2,000 m (4,900 to 6,600 ft). They prefer dense forests with rocky cliffs and caves, but may be found in maquis vegetation, orchards, and urban margins. They have frequently been reported from caves as deep as 400 m (1,300 ft), where they can shelter from predators.[4]

Edible dormice are primarily herbivorous, feeding mainly on berries, apples, and nuts. However, they are adaptable, and have also been reported to eat bark, leaves, flowers, invertebrates, and even eggs. Beech mast, which is rich in energy and protein, is an excellent source of food for young and lactating females.[4] Some dormice are found to have hair and ectoparasite remains in their stomachs, but this is mainly due to accidental ingestion during grooming.[15]

Edible dormice also consume large numbers of beech tree seeds. A single, large, seeding tree within the home range of a dormouse can produce enough resources to support the energy requirements of reproduction. The location and age of a beech tree helps dictate where a population of dormice live, since older trees produce more seeds.[16]

When present in large numbers, they may cause damage to orchards and be considered pests. Their primary predators include owls, foxes, pine martens, and wildcats.[4] 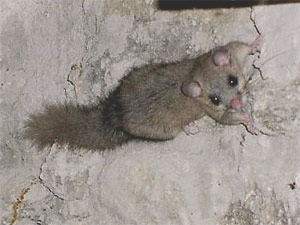 Edible dormice are nocturnal, spending the day in nests taken from birds, or located in hollow trees or similar shelter. They are good climbers, and spend most of their time in the trees, although they are relatively poor jumpers. The dormouse uses sticky secretions of plantar glands when they are climbing on smooth surfaces to prevent them from falling.[4] They generally stay in the forest and avoid open areas to any extent.[13] They are not generally social animals, although small groups of closely related adults have occasionally been reported.[17] Many edible dormice mothers form communal nesting areas where they care for their young together.[4]

Edible dormice are active during a six-month period and go into hibernation[13] from roughly October to May, depending on local climatic conditions. They are mostly active in the summer and are active on average 202 min in a 24-hour day, mostly at night.[6] They prepare a den in soft soil or hidden in a cave, and rely on fat reserves to survive through the winter. During hibernation, metabolic rate and body temperature fall dramatically, and the animal may cease breathing altogether for periods up to an hour.[18]

They have adapted well to the presence of man and now frequently hibernate in insulated attics and even dark shelves in cupboards, particularly if soft materials are on the shelf to make a nest. They can be regarded as a pest in this situation due to the fire risk from gnawed electrical cables and fouling from their faeces. In recent years, they have become resistant to many rodenticides.[citation needed] In the wild, most edible dormice hibernate for three winters, and then die in the fourth while hibernating, when their cheek teeth are worn out to a degree that prevents normal mastication of food.[19]

The breeding season is from late June to mid August, but both male and female dormice do not produce every year.[20] Variation in food resources strongly influences reproduction because reproduction is tightly linked to the availability of energy-rich seeds.[21] Therefore, edible dormice breed during the phase of high food availability. Females are able to produce additional young if amino acid-rich foods like inflorescences, unripe seeds, and (or) larval insects, which also increase their numbers by eating the same enriched plant food, are available.[22] An abundance of energy-rich seeds allows newborn dormice to increase their body fat to prepare for their first hibernation.[21] Females reach sexual maturity at 351–380 days old and males significantly lower their body mass during mating season.[23]

Males are not territorial, and may visit the territories of several nearby females to mate, becoming aggressive to any other males they encounter. The male attracts a female by squeaking, then conducts a circular courtship dance before mounting her. During mating season, males lower their body mass and use their body fat reserves to help fuel the energetic costs of reproduction.[23]

Gestation lasts from 20–31 days, and results in the birth of up to 11 young, although four or five are more typical.[4] They develop their fur by 16 days, and open their eyes after around 3 weeks. They begin to leave the nest after around 30 days, and are sexually mature by the time they complete their second hibernation.[4] Compared with similarly sized mammals, they have an unusually long lifespan, and have been reported to live up to 12 years in the wild.[24]

Although the edible dormouse is the only living member of its genus, a number of fossil species are also known. The genus Glis first originated in the middle Oligocene, although it did not become common until the Pliocene. By the Pleistocene, only one species, G. sackdillingensis, is known to have survived, and this is likely the ancestor of the modern species, which first appeared in the early to mid-Pleistocene.[4]

Edible dormice that have been isolated on oceanic islands are a prime example of insular gigantism, in which small animals in isolated locations become larger over the course of many generations.[25] Although it is not known why, the number of teats on a female edible dormouse varies across regions of Europe. For example, those in Italy have two to seven, while those in Lithuania have three to six.[26] 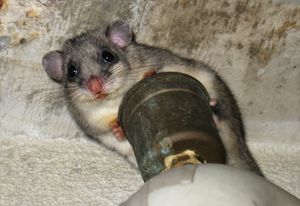 Edible dormouse in a cellar

The edible dormouse was farmed and eaten by the ancient Romans and the Etruscans (usually as a snack), hence the word edible in its name. The Romans would catch dormice from the wild in autumn when they were fattest.[27] The dormice were kept and raised either in large pits or (in less spacious urban surroundings) in terra cotta containers, the gliraria,[28] something like contemporary hamster cages.

They fed these captive dormice walnuts, chestnuts, and acorns for fattening. The dormice were served by either roasting them and dipping them in honey or stuffing them with a mixture of pork, pine nuts, and other flavorings.[27] It was, however, very important to upper-class Romans that the dormice be separated from other products of the hunt, like the large game, for presentation purposes.[29]

To this day, wild edible dormice are consumed in Slovenia, where they are considered a rare delicacy and dormouse trapping an ethnic tradition. They use several methods of trapping. The first used were the hollow-tree trapping method and the flat-stone trapping method. By the 17th century, the peasant trappers had invented the first self-triggering traps, usually made of different kinds of wood.[30]

In the 19th century, traps made from iron and steel were introduced. The trappers used many different types of bait to entice the dormice. The bait ranged from pieces of fruit to bacon soaked in brandy. During the prime season, trappers could catch between 200 and 400 dormice, depending largely on what kind of trap they were using. The people of Slovenia did not just catch the dormice for their meat.[30] Use of dormice for food and fur and of dormouse fat as a medicament is documented there since the 13th century. Seasonal dormice feasts were welcome protein supplements for the impoverished peasantry.[31]