Edinburgh College of Art (ECA) is an art, design, creative and performing arts school in Edinburgh, the oldest and largest in Scotland, providing higher education in art and design, architecture, history of art and music disciplines for over two thousand University of Edinburgh students. ECA has an international reputation as one of the most successful art colleges in Europe; its stated mission is to promote critical inquiry through scholarly research, learning, teaching and education in creative practice.[5] Edinburgh College of Art is a School in the College of Humanities and Social Science, University of Edinburgh.[6] ECA is mainly located in the Old Town of Edinburgh, overlooking the Grassmarket; the Lauriston Place campus is not far from the University of Edinburgh's George Square campus. It was ranked 1st in Art and Design in the UK in the Complete University Guide 2012.

Edinburgh College of Art can trace its history back to 1760, when the Trustees Drawing Academy of Edinburgh was established by the Board of Trustees for Fisheries, Manufactures and Improvements in Scotland. This board had been set up by Act of Parliament in 1727 to "encourage and promote the fisheries or such other manufactures and improvements in Scotland as may most conduce to the general good of the United Kingdom". The aim of the academy was to train designers for the manufacturing industries. Drawing and the design of patterns for the textile industries were taught at the Academy's rooms at Picardy Place.

The Board was responsible for the construction of the Royal Institution (named for the Royal Institution for the Encouragement of the Fine Arts in Scotland), now the Royal Scottish Academy building, on The Mound and also commissioned the Scottish National Portrait Gallery on Queen Street. From 1826, classes were held at the Royal Institution building. The Master of the School was always a fine artist, the first being French painter William Delacour. Subsequent masters included Alexander Runciman and David Allan. The Academy's focus gradually shifted from applied arts to encompass fine art, and the school gained a reputation for excellence in both painting and design. Scottish artists who were trained at the Academy include John Brown, Alexander Nasmyth and Andrew Wilson.

In 1858, the Academy was affiliated to the Science and Art Department in London, known as the "South Kensington system", under which it became the Government School of Art for the city of Edinburgh. A School of Applied Art was also established under this system. The Drawing School became part of a system of schools managed on similar lines, and distinctive teaching practices were lost. In 1903 it amalgamated with the School of Applied Art. In 1907, the Scottish Education Department took over responsibility for the school, and it became Edinburgh College of Art.[10]

The College was officially recognised by the Scottish Government as a Small Specialist Institution for the teaching of art, design and architecture prior to the merger with University of Edinburgh in 2011. From 1968 to 2004, it was associated with Heriot-Watt University for degree awarding purposes. Today's students graduate from the College with degrees awarded by the University of Edinburgh as prior to the merger in 2011, the two institutions were partners in an academic federation.[11]

In 2005, the College joined with Edinburgh Napier University to launch the Screen Academy Scotland, a new centre of excellence in film learning and education. 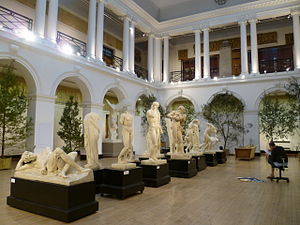 With the creation of Edinburgh College of Art in 1907, the institution moved to new premises on Lady Lawson Street. Formerly a cattle market, the site lies above the Grassmarket and opposite Edinburgh Castle. The red sandstone main building was designed in the Beaux-Arts style by John More Dick Peddie and George Washington Browne, and was completed in 1909. The main building was listed Category A in 1970. Inside, the Sculpture Court displays casts of the Elgin Marbles and other antique statuary, alongside changing displays of contemporary student's work.[12]

The Architecture Building was added to the east end of the college in 1961, designed by architect Ralph Cowan, who was a Professor of Architecture at the college. In 1977 the campus was completed in its present form with the addition of the Hunter Building. This L-shaped red sandstone block encloses the college courtyard, and fronts Lauriston Place to the south. In the 1990s the college took over a separate group of buildings in the Grassmarket, for use as a library and teaching space, and also took over the former Salvation Army building on West Port. These buildings in the Grassmarket and West Port were disposed of after the College took over Evolution House.

The nine-storey Evolution House on West Port by Reiach and Hall Architects was completed 2003, adjacent to the main College building. Built as speculative offices, it now houses the art and design library, as well as providing design studios and office facilities. The College is now concentrated on the Lauriston Place site, and the Grassmarket (First Year studies) and former Salvation Army buildings (Animation and Postgraduate Tapestry studios) have been sold.

As a result of the merger with the University of Edinburgh in August 2011 the new enlarged ECA includes Minto House, Chambers Street (History of Art and Architecture) and Alison House in Nicolson Square (Music).

See also Category:Alumni of the Edinburgh College of Art