Edmond is a city in Oklahoma County, Oklahoma, United States, and a part of the Oklahoma City metropolitan area in the central part of the state. As of the 2010 census, the population was 81,405, making it the sixth largest city in the state of Oklahoma.[2]

The city limits are located on the northern border of Oklahoma City. Two major highways connect Edmond to downtown Oklahoma City: U.S. Route 77 (the Broadway Extension), which runs through the center of Edmond, and Interstate 35, which runs along the eastern side. Public transportation is provided by Citylink Edmond bus service.

In 2011, Edmond was #1 on CNBC's "10 Perfect Suburbs" list.[5] Edmond was listed as one of the "Top 100 Places to Live in 2007" by Relocate America.[6] Edmond was selected the most outstanding community in its class for five years in a row by the State Chamber of Commerce and State Industrial Development Department.

Edmond is located just north of Oklahoma City in Oklahoma County, Oklahoma. According to the United States Census Bureau, the city has a total area of 87.9 square miles (228 km2), of which 85.1 square miles (220 km2) is land and 2.8 square miles (7.3 km2) or 3.19% is water. Arcadia Lake on the east side of the city is a fishing spot for the Oklahoma City metropolitan area and contains bluegill, channel catfish, blue catfish, and largemouth bass.[7] Twin Bridges Lake is a second lake in the city.

Edmond lies in the Sandstone Hills region of Central Oklahoma, known for hills, blackjack oak, and post oak.[8] The city falls into an ecological region known as the Cross Timbers.[9]

Edmond has a humid subtropical climate with frequent variations in weather during part of the year and consistently hot summers. Prolonged and severe droughts often lead to wildfires and heavy rainfall often leads to flash flooding and flooding. Consistent winds, usually from the south or south-southeast during the summer, help temper the hotter weather. Consistent northerly winds during the winter can intensify cold periods. Severe ice storms and snowstorms happen sporadically during the winter.

The city is located in Tornado Alley and is subject to frequent and severe tornadoes and hailstorms. The Oklahoma City metropolitan area is one of the most tornado-prone major cities in the world. 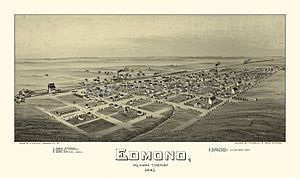 The Santa Fe rail line in Oklahoma Territory established a water and coaling station for steam engines at this location when the Santa Fe Railroad built into Indian Territory in 1887.[12] The site for the station was chosen because it was the highest point on the line in Oklahoma County; train could more easily accelerate going downhill while leaving the station in either direction. The railroad then named the station for Edmond Burdick, the Santa Fe’s traveling freight agent.[13] When the town was formed after the Oklahoma Land Run of 1889, early settlers decided to adopt the name. Though most of the remnants of the old railroad infrastructure are gone, the Santa Fe, now BNSF, freight line still runs through the same course.[citation needed]

The town of Edmond sprang up overnight during the great Oklahoma land run on April 22, 1889, when homesteads were staked around the Santa Fe station.[14] The original plat for Edmond was prepared by the Seminole Town and Development Company, a newly formed syndicate with ties to the railroad.[12] Many of the original streets were named for men associated with either the Santa Fe Railroad or the town syndicate. The first mayor and city officers were elected in May 1889, and Edmond’s population was 394 in the 1890 census.

The first public schoolhouse in Oklahoma Territory, completed in August 1889, is in Edmond.[13] It still stands as a historic monument on 2nd Street between Boulevard and Broadway and is open to the public on the first two Saturdays of each month or by appointment.

St. John the Baptist Catholic Church, the first church opened after the land run,[13] was located on the southwest corner of East First and South Boulevard. The congregation still exists, although not in its original building or location.[15]

In December 1890, the territorial legislature established three universities: the state university in Norman, the agricultural and mechanical college in Stillwater, and a "normal" or teaching school in Edmond. The first classes for the Territorial Normal School (University of Central Oklahoma) were held November 9, 1891, in the Methodist Church on the southwest corner of North Broadway and West Hurd. Old North, the Territorial Normal School’s iconic first building, was opened for classes on January 2, 1893, and ahead of Oklahoma State University’s Central Hall or Oklahoma University's Science Hall.[16]

Edmond was the site of the post office massacre on August 20, 1986, in which 14 people were killed and six wounded by Patrick Sherrill, an ex-postman who then committed suicide. This event was the deadliest killing in a string of postal employee murder-suicides throughout the U.S that are the inspiration for the American slang term, "going postal".[17] A memorial to the victims of the attack stands outside of the U.S. Post Office in downtown Edmond.[18]

The city was also the subject of a U.S. Supreme Court case in which a Christian cross was depicted on the city seal, raising issues concerning the Establishment Clause of the U.S. Constitution. In May 1996, the Supreme Court let stand a Federal Appeals Court ruling ordering the city to remove the cross from the seal.[20] A replacement icon has yet to be agreed upon, resulting in the curiously vacant spot on the city's seal.[citation needed]

A memorial service for famed Oklahoman baseball player Bobby Murcer was held in Edmond on August 6, 2008, at the Memorial Road Church of Christ. Among the some 2,000 attending the memorial were Reggie Jackson, Derek Jeter, Andy Pettitte, and current Yankees manager Joe Girardi.[21]

In 2009, Edmond appeared on Newsmax magazine's list of the "Top 25 Most Uniquely American Cities and Towns," a piece written by current CBS News travel editor Peter Greenberg. In determining his ranking, Greenberg cited the city's 10-day LibertyFest event, which includes the state's largest parade, as well as fireworks, a beauty pageant, kite festival, and rodeo.[22]

The supermarket chain Homeland is based in Edmond. The University of Central Oklahoma, one of the fastest growing in the state, is a major employer.[12] The city's economy is centered on technology, manufacturing, construction, wholesale, and retail trade.[12]

According to the City's 2014 Comprehensive Annual Financial Report,[23] the top employers in the city are:

There are many parks in Edmond:[24]

The city of Edmond is making efforts to promote public art with murals, stained glass and steel sculptures. On a portion of Main Street, statuary lines nearly every corner.[28] On July 4, 2007, the City inaugurated a bronze statue of Nannita R.H. Daisey, believed to be the first woman laying claim on Oklahoma land in the first (1889) land run.[29] In 2015 the Dave McGary sculpture of Chief Touch the Clouds was relocated to Edmond from Houston's Astrodome. The 18 foot tall, 15 foot wide sculpture is located on Second Street at the entrance of the University of Central Oklahoma.[30]

Edmond residents have access to 57 Protestant and 2 Catholic congregations, 4 LDS Church congregations, one Unitarian Universalist church, one Islamic mosque, and one Bahá'í center.

Rugby union is a developing sport in Edmond as well as in the Oklahoma City metropolitan area. Edmond boasts two rugby clubs: The Edmond Rugby Club (aka "The Storm")[31][32] and the University of Central Oklahoma Rugby Football Club.[33][34]