Edmond Romulus Amateis (27 February 1897; Rome, Italy – 1 May 1981; Clermont, Florida) was an American sculptor and educator. He is known for garden-figure sculptures, large architectural sculptures for public buildings and portrait busts.

Amateis was the son of Louis Amateis (1855−1913), a noted sculptor who had immigrated from Italy in 1883 and became founder of the School of Architecture at George Washington University in Washington D.C. Edmond Amateis received his early education in Washington and took up the study of art at the Beaux-Arts Institute of Design in New York City, in 1915,[1] which were interrupted during World War I by service in the United States Army. 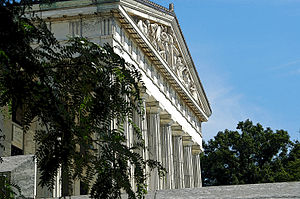 pediment of the Buffalo History Museum
File:Warmspringsbusts.jpg
Bronze busts in the Polio Hall of Fame

While in Europe, he spent four months in Paris at the Académie Julian with François Boucher and Paul Landowski as his teachers. When he returned to the United States, he resumed his studies at the Beaux-Arts Institute, combined with work in the studios of Henry Shrady and John Clements Gregory. In 1921 Amateis won the fellowship of the American Academy in Rome for the next three years.

From 1942 to 1944 he was the fifteenth president of the National Sculpture Society. In his later years Amateis lived in Florida, where he developed an interest in the breeding of flowers. A variety of rhododendron is named for him.[2]

After his return to the United States he was commissioned with a number of important works of architectural sculpture, such as

In 1929 Summer won the Avery Prize given by the Architectural League, and in 1933, Circe the McClees Prize at the Pennsylvania Academy. He was for a time Associate in Sculpture at Columbia University. He was also a member of the National Sculpture Society and the Architectural League. He was elected as an Associate member of the National Academy of Design in 1936, and made a full member in 1942.