From Infogalactic: the planetary knowledge core
Jump to: navigation, search
This article is about an Italian physicist. For a European unmanned cargo resupply spacecraft, see Edoardo Amaldi ATV. 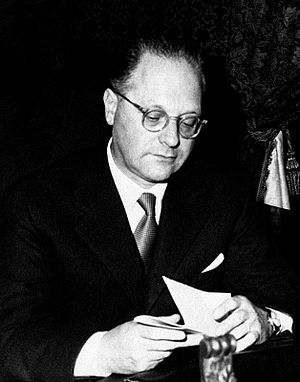 Amaldi was born in Carpaneto Piacentino, son of Ugo Amaldi, professor of mathematics at the University of Padua, and Luisa Basini.[1][2][3][4]

Amaldi graduated under the supervision of Enrico Fermi and was his main collaborator until 1938, when Fermi left Italy for the United States. In 1939, Amaldi was drafted into the Royal Italian Army and returned to physics in 1941. 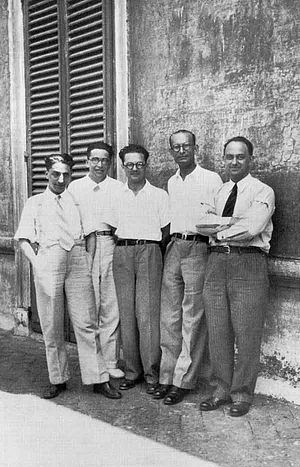 The Via Panisperna Boys, including Edoardo Amaldi (center), circa 1934

After WWII, Amaldi held the chair of "General Physics" at the Sapienza University of Rome, rebuilt the post-Fermi school of physics, and was the co-founder of the Italian National Institute for Nuclear Physics and of ESRO. He was the general secretary of CERN at its early stages when operations were still provisional, before September's 1954 official foundation.[5][6][7][8] He pioneered in Europe the search for gravitational waves.

His main scientific results have been the research on slow neutrons in the Fermi group, and the evidence for antiproton annihilations with emulsion techniques, somewhat contemporary to its production in accelerators by Emilio Segrè and collaborators. Amaldi co-authored about 200 scientific publications ranging from atomic spectroscopy and nuclear physics to elementary particle physics and experimental gravitation, as well as textbooks for secondary schools and universities. He also wrote historical-scientific books, like for example, the biography of his missing friend Ettore Majorana. He was elected a Foreign Honorary Member of the Soviet Academy of Sciences in 1958[9] and American Academy of Arts and Sciences in 1962.[10] In 1963 he became foreign member of the Royal Netherlands Academy of Arts and Sciences.[11]

Amaldi died unexpectedly on 5 December 1989, still in full activity, while he was president of the Accademia dei Lincei, of which he had been a member since 1948.

The third Automated Transfer Vehicle of the European Space Agency bears his name.[12]