Lua error in Module:Redirect at line 61: could not parse redirect on page "Khil".

This name uses Eastern Slavic naming customs; the patronymic is Anatolyevich and the family name is Khil.

Eduard Anatolyevich Khil (Russian: Эдуа́рд Анато́льевич Хиль; IPA: [ɪdʊˈart ɐnɐ'tolʲjɪvʲɪtɕ ˈxʲilʲ] (often transliterated as Edward Hill); 4 September 1934 – 4 June 2012) was a Russian baritone singer and a recipient of the People's Artist Award of the Russian SFSR. Khil became known to international audiences in 2010 when a 1976 recording of him singing a non-lexical vocable version of the song "I am very glad, as I'm finally returning back home" (Я очень рад, ведь я, наконец, возвращаюсь домой) became an Internet meme, often referred to as "Trololol",[1] or "Trololo" as an onomatopoeia of the song, or the "Russian Rickroll". The song is now commonly associated with Internet trolling.

Khil was born on 4 September 1934 in Smolensk to Anatoly Vasilievich Khil, a mechanic, and Yelena Pavlovna Kalugina, an accountant.[2] Life as a child was hard on Khil. With his family breaking up, he was brought up by his mother. During the Great Patriotic War (WWII Eastern Front), his kindergarten was bombed, he was separated from his mother and evacuated to Bekovo, Penza Oblast where he ended up in a children's home, which lacked basic facilities and needs, such as food. Despite this Khil regularly performed in front of wounded soldiers in the nearby hospital.[2] He was reunited with his mother in 1943 when Smolensk was liberated from Nazi Germany and in 1949 moved to Leningrad, where he enrolled and then graduated from printing college.[2] In 1955, Khil enrolled in the Leningrad Conservatory, where he studied under direction of Yevgeny Olkhovsky and Zoya Lodyi. He graduated in 1960.[2] During his studies, he began performing various lead operatic roles, including Figaro in The Marriage of Figaro.[2]

After graduating he fell in love with pop music after attending a Klavdiya Shulzhenko concert,[2] and started to perform popular music. This led to him winning several prizes in the next two decades. He won the "All Russian Competition for Performers" in 1962 and was invited to perform at the "Festival of Soviet Songs" in 1965.[2] He attained second place in Sopot International Song Festival in 1965.[3] In 1967, composer Andrey Petrov won the USSR State Prize for a collection of songs performed mainly by Khil,[2] and in 1968 Khil won the Meritorious Artist of the RSFSR. The Order of the Red Banner of Labour was awarded in 1971,[4] and Russia's most prestigious artist award, the People's Artist of Russia, was awarded to Khil in 1974.[3] He was so successful that the public called him the 'Symbol of Leningrad'.[5] 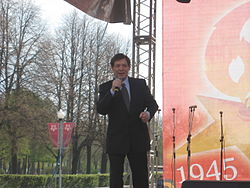 Khil toured in over 80 countries[2] and lived at Tolstoy House (Толстовский дом) in St. Petersburg.[6]

After his singing career faded in the early 1990s, Khil re-entered private life and worked in a cafe in Paris, singing cabaret. Starting in 1997, Khil was involved with his son in a joint project with the rock group Prepinaki.

For his 75th birthday, Khil was awarded the Order of Merit for the Fatherland, 4th Class in 2009 by Russia[2] and in 2010 performed in St. Petersburg's Victory Day Parade.

He was the first artist to sing such songs as "Woodcutters" (Лесорубы in Russian) and "I Am So Happy to Finally Be Back Home" and Moon Stone (Лунный камень) by Arkady Ostrovsky, and "Song About Friend" (Песня о друге), "Blue Cities" (Голубые города), "And People Go to the Sea" (А люди уходят в море) by Andrey Petrov. Other popular songs performed by Khil included "From What the Homeland Begins?" (С чего начинается Родина?), "How the Steamers Are Seen Off" (Как провожают пароходы), "Winter" (Зима), "Birch Sap" (Берёзовый сок), "Alder Catkin" (Серёжка ольховая), "We Need One Victory" (Нам нужна одна победа), and many others.

Khil's manner of execution of songs is unique and easily recognizable in Russia, characterized by charm, always having a great sounding bright, sonorous voice and the flight of lyrical baritone, with the powerful charge of optimism and humour.[5]

In July 1958, Khil met his future wife, the ballerina Zoya Pravdina, while performing alongside her at the Leningrad Conservatory. During the summer and fall, they toured together, and quickly began a romantic relationship. They were married on 1 December 1958, and stayed married until his death in 2012.[5][7]

The couple had one son, Dmitri, born 2 June 1963, and a grandson named Eduard (born in 1997) after his grandfather. The family name Khil is not derived from Hill, as it is reported on various web sites. The singer stated in an interview that the name likely comes from a Spanish ancestor with the surname Gil, which is pronounced similar to hill.[5]

On 8 April 2012, Khil suffered a stroke and was hospitalized with serious brain damage to the Mariinsky hospital in St. Petersburg, where he fell into a coma immediately afterward.[8][9] His condition was later reported as critical, with irreversible brain damage. Doctors were initially optimistic about a partial recovery, but later retracted these statements.[10] He died in the hospital in St. Petersburg on 4 June 2012, from complications from the stroke, aged 77.[11][12][13]

Among people who offered his condolences to Khil's family was Russia's President Vladimir Putin. He said about Eduard Khil:[14]

His name is connected to an era in the history of Russian music. Eduard Khil was unique in his extraordinary charm and lyricism, constant in his professionalism, vocal culture and creative taste. Many of the songs he performed became part of the golden fund of the Russian stage.

The song was written by Arkady Ostrovsky. Besides Khil, it was also performed by Valery Obodzinsky,[17][18] Hungarian singer János Koós,[19] and by Muslim Magomayev on the Little Blue Light programme in the Soviet Union.[20] According to Khil, the Trololo song originally featured lyrics which described a narrative about a cowboy riding a horse to his farm:[21][22]

I'm riding the prairie on my stallion, so-and-so mustang, and my beloved Mary is thousand miles away knitting a stocking for me".

The Trololo video first appeared on some sites beginning on 21 February 2010, the most prominent of those being the "Trololo" website trololololololololololo.com that helped push the video into popular awareness, receiving more than 3,000,000 hits in its first month.[23][24] It gained prominence on 3 March during a segment on The Colbert Report[25] after appearing on Red Eye w/ Greg Gutfeld a handful of times over the previous couple of weeks.[when?] It was also parodied by actor Christoph Waltz on Jimmy Kimmel Live![26] as well as Craig Reucassel of The Chaser on the 2010 Australian TV specials Yes We Canberra!, and in September 2011 on the animated American television series Family Guy in its tenth season premiere episode, "Lottery Fever".[27] The Magomayev version is often dubbed as "Sheldon Cooper singing Trololo" due to Magomayev's strong physical resemblance to Jim Parsons, who plays Cooper on The Big Bang Theory.[20]

"Trololo"'s popularity in turn re-ignited interest in Khil's singing career aside from his vocalised performance; for a time, the "Trololo" website[28] included a petition for Khil to come out of retirement to perform on a world tour.

I haven't heard anything about it. It's nice, of course! Thanks for good news! There is a backstory about this song. Originally, we had lyrics written for this song but they were poor. I mean, they were good, but we couldn't publish them at that time. They contained words like these: "I'm riding my stallion on a prairie, so-and-so mustang, and my beloved Mary is thousand miles away knitting a stocking for me". Of course, we failed to publish it at that time, and we, Arkady Ostrovsky and I, decided to make it a vocalisation. But the essence remained in the title. The song is very playful – it has no lyrics, so we had to make up something so that people would listen to it, and so this was an interesting arrangement.

Nobody banned its lyrics, but my father just composed the music during the period of his disagreement with Lev Oshanin. The latter told him that the lyrics are more important in a song and that a composer is nothing without a lyricist. So Dad told him during the argument, "Well, I don't need your verses at all, I'll manage without them."

Khil's son was quoted as saying "He thinks maybe someone is trying to make a fool of him," and "He keeps asking, 'Where were all these journalists 40 years ago?'"[16]

Trololo was used by Butlins in a television advertising campaign in the United Kingdom, much to critical ire,[31][32] as well as a United States ad campaign with the Volkswagen Beetle convertible that debuted during Super Bowl XLVII in 2013.[33] It was also featured in the 2012 video game Ratchet and Clank: Full Frontal Assault.[34]

On December 31, 2011, Khil performed the Trololo song again live on a 2012 New Year's Russian holiday television special. Within a week, the first week of January 2012, the new video of Khil performing his new version of the Trololo song had gone viral on YouTube again, earning over three million hits.[35] Khil died later that year.