Eduard Limonov (Russian: Эдуа́рд Лимо́нов, real name Eduard Veniaminovich Savenko, Russian: Эдуа́рд Вениами́нович Саве́нко; born 2 February 1943) is a Russian writer and political dissident. He is the founder and former leader of the banned National Bolshevik Party. Formerly an opponent of Vladimir Putin, Limonov was one of the leaders of The Other Russia political bloc.[1] However, following the Russian military intervention in Ukraine, he has emerged as a strong supporter of Putin on Russia's nationalist right.[2][3][4]

Limonov was born in former Soviet Union, in Dzerzhinsk, industrial town in the Gorky Oblast (now Nizhny Novgorod Oblast). Limonov's father—then in the military service – was in a state security career and his mother was a homemaker.[5] In the early years of his life family moved to Kharkiv in the Ukrainian SSR, where Limonov grew up. He studied in the H.S. Skovoroda Kharkiv National Pedagogical University.

By Limonov's own account, he began writing "very bad" poetry at the age of thirteen and soon after became involved in theft and petty crime as an adolescent hooligan.[5] Limonov adopted his nom de plume for use in literary circles during this time.[5]

Limonov has been married four times. In 1966,[6] together with his first wife, Anna Moiseevna Rubinstein,[7] he first came to Moscow, earning money sewing trousers (Limonov "dressed" many in the intelligentsia circles, sculptor Ernst Neizvestny and a poet Bulat Okudzhava among others), but later returned to Kharkov.[6] Limonov moved to Moscow again in 1967, marrying a fellow poet, Yelena Shchapova, in a Russian Orthodox[5] ceremony in 1973.[7] During the Moscow period Limonov was involved in the Konkret poets' group and sold volumes of his self-published poetry while doing various day jobs. Having achieved a degree of success in this manner by the mid-1970s, he and his wife emigrated from the Soviet Union in 1974.[5] The exact circumstances of Limonov's departure are unclear and have been described differently. Reportedly, KGB secret police gave him a choice either to become a snitch, or leave the country.[8]

Although neither he nor Shchapova were Jewish, the Soviet Union issued him a false Israeli visa to do so, but soon after the pair arrived in the United States.[5] Limonov settled in New York City, where he and Shchapova soon divorced.

Limonov worked for a Russian-language newspaper as a proofreader and occasionally interviewed recent Soviet emigrants.[5] Like Eddie, the immigrant protagonist of Limonov's first novel It's Me, Eddie, Limonov was drawn to punk subculture and radical politics. Limonov's New York acquaintances included Studio 54's Steve Rubell and a Trotskyist group, the Socialist Workers Party.[9] As protagonist Eddie finds out as a consequence, the latter is a victim of the FBI.[10] Limonov was himself harassed by the FBI.[11] As he later retold it in France, the FBI also interrogated dozens of his acquaintances, once asking a friend about "Lermontov" in Paris.[12]

I did not find the freedom to be a radical opponent of the existing social structure of the country which pompously calls itself the 'leader of the free world,' but neither did I notice it in the land which represents itself as the 'future of all humanity.' The FBI is just as zealous in putting down American radicals as the KGB is with its own radicals and dissidents. True, the methods of the FBI are more modern. . . . The KGB is, however, studying the techniques of its older brother and modernizing its methods.[12]

The first chapter of It's Me, Eddie, was published by an Israeli Russian-language journal.[5] Finished by 1977, it was consistently rejected by publishers in the United States and only brought out a few years after becoming an instant success in France in 1980.[5] In interviews, Limonov says this was because the book was not written with anti-Soviet tones, like other Russian literature admired in America.[5]

In New York, Limonov also discovered another side of the American Dream. After being a celebrated dissident, he lived a poor life due to his low revenues. He managed to afford a room in a miserable hostel and spent time with homeless persons, some of whom he had casual sexual intercourse with, as related in the memoir The Russian Poet Prefers Big Blacks[13] published in France under the title Le poète russe préfère les grands nègres. He then found a job as a butler for a millionaire in the Upper East Side. This period of his life led him to write autobiographical texts, including His Butler's Story.

Finally, disillusioned, Limonov left America for Paris with his lover Natalya Medvedeva in 1980, where he became active in French literary circles. Having remained stateless for thirteen years, he was granted French citizenship in 1987.[12] His Soviet citizenship was eventually restored by Mikhail Gorbachev.[citation needed] Limonov and Medvedeva married but were divorced in 1994.

Limonov has been later married to the actress Yekaterina Volkova and has a son Bogdan and daughter Alexandra with her.

Eduard Limonov's life is related in details by Emmanuel Carrère in his 2011 biographical novel "Limonov".[13]

Limonov's works are noted for their cynicism. His novels are also (to an extent fictive) memoirs, describing his experiences as a youth in Russia and as émigré in the United States.

In 2007 the Swiss novelist Christian Kracht wrote to American businessman David Woodard, "Solzhenitsyn has described Limonov as 'a little insect who writes pornography,' while Limonov described Solzhenitsyn as a traitor to his homeland who contributed to the downfall of the USSR. Ad Marginem publishes my friend Eduard Limonov’s novels. Your obedient servant—Christian Eduard Kracht (truthfully my middle name)"[14]

Limonov's works were scandalous for the Russian public, once they began to be published in the USSR during the late perestroika era. Particularly noted is It's Me, Eddie that contained numerous pornographic descriptions of homosexual acts involving the narrator. The author later argued that such scenes were fictive; however, his fellow Russian nationalist were nevertheless appalled by such descriptions in Limonov's work. Thus, the Neo-Nazi leader Alexander Barkashov remarked to a journalist of Komsomolskaya Pravda concerning Limonov: ″Если лидер педераст, то он родину продаст.″ (″If the leader is a pederast, he will betray the fatherland″)[15]

Since the late 1990s, Limonov has been a regular contributor to "Living Here" and later to the eXile, English-language newspapers in Moscow. These are the only known sources where Limonov has written articles in English. When he joined as a contributor, he specifically asked the editors of the paper that they preserve his "terrible Russian English style." Although most of his featured articles are political, he also writes on many topics, including "advice for ambitious youngsters." 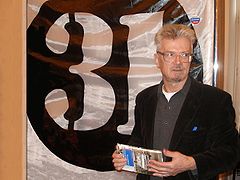 In 1991, Limonov returned to Russia from France and became active in politics. He founded a newspaper called Limonka (Russian nickname for the modern lemon-shaped F1 hand grenade; presumably, a play on his pen name Limonov [Lemon] and the explosive nature of the material), and a small, equally radical political party called the National Bolshevik Party. The National Bolshevik Party (NBP) believes in the creation of a grand empire that will include the whole of Europe and Russia, as well as Northern/Central Asia to be governed under Russian dominance. Although the group never managed to obtain an official party status, it remains active in protests on various social and political issues, in particular harshly criticizing the government of Vladimir Putin. One party program used in the past supports a man's right not to pay attention when his girlfriend talks to him.[16] One of the first members - the fourth - of the National Bolshevik Party was the punk legend Yegor Letov - leader of the band GrOb.[17]

In 1996 a Russian court judged in a hearing that the NBP paper Limonka had disseminated illegal and immoral information: "in essence, E. V. Limonov (Savenko) is an advocate of revenge and mass terror, raised to the level of state policy." The court decided to recommend issuing an official warning to Limonka, to investigate the possibility of examining whether Limonov could be held legally responsible, and to publish its decision in Rossiiskaia gazeta.[18]

On the Ukrainian Independence Day 24 August 1999, Limonov along with 15 other supporters from the top of the city's clock tower in Sevastopol publicly called to review the status of the city and not to ratify Treaty about Friendship and Cooperation between Russia and Ukraine by the State Duma.[19] In the 2000s Limonov's NBP liberalized to an extent, even denouncing all xenophobia and antisemitism on its official website. The party is part of Garry Kasparov's United Civil Front. During the 1990s, he supported Bosnian Serbs in the Yugoslav wars; and Abkhaz and Transnistrian secessionists against Georgia and Moldova, respectively.[20]

Limonov was jailed in April 2001 on charges of terrorism, the forced overthrow of the constitutional order, and the illegal purchase of weapons. Based on an article published in Limonka under Limonov's byline, the government accused Limonov of planning to raise an army to invade Kazakhstan. After one year in jail, his trial was heard in a Saratov court, which also heard appeals from Russian Duma members Vladimir Zhirinovsky, Alexei Mitrofanov and Vasiliy Shandybin for his release. He maintained that the charges were ridiculous and politically motivated, but was convicted and sentenced to four years imprisonment for the arms purchasing, while the other charges were dropped.[21] He served almost two years before being paroled for good behavior.[22] Following this experience, he wrote a drama on the Russian penitentiary world, "Death in the police van". The stage is a police van in a courtyard of the Butyrka prison, (Pugachev has been a famous inmate); he says that the prison is severely overcrowded (cells meant for ten people are occupied by one hundred, who sleep in shifts), narcotics and alcohol are cheap and easy to procure through the wardens; since usually there is but one needle per cell, AIDS and tubercolosis are rampant. The comparison with the communist prisons, with which the author is well acquainted, is not favorable.

Limonov was a strong supporter of Serbia in the wars that followed the breakup of Yugoslavia and achieved notoriety by participating in a sniper patrol in Bosnia and Herzegovina during the Bosnian war. Paweł Pawlikowski's film Serbian Epics includes footage of Limonov travelling to the front lines of Sarajevo in 1992 with Radovan Karadžić, then the Bosnian Serb president and later an accused war criminal, and firing a sniper rifle in the direction of the besieged city.[23][24][25][26] When asked about the incident in 2010, Limonov claimed he had been shooting at a target range and that Pawlikowski had added an extra frame to make it appear that he had shot his weapon at an apartment complex. This explanation has been challenged.[27] On another occasion, Limonov said that he "celebrated his 50th birthday in Kninska Krajina [...] by firing from a Russian-made heavy gun at Croatian Army headquarters."[28]

Limonov was initially an ally of Vladimir Zhirinovsky and was named as Security Minister in a shadow cabinet formed by Zhirinovsky in 1992.[29] However Limonov soon tired of Zhirinovsky, accusing him of moderateness and of approaching the president and consequently split from him, publishing the book "Limonov against Zhirinovsky" (1994).

On 3 March 2007, Limonov and members of his National Bolshevik Party together with other left and right-wing opposition activists took part in organizing Saint Petersburg Dissenters' March involving scores of people rallying against Vladimir Putin and Valentina Matviyenko's policies. Limonov was detained by police in the very beginning of the rally.[30]

On 14 April 2007 Limonov was arrested after an anti-government rally in Moscow.[31]

On 31 January 2009 Limonov together with a number of members of the National Bolshevik Party were detained by the Police during an Anti-Kremlin rally in Moscow.[32]

An online video posted on 22 April 2010 showed Limonov, Viktor Shenderovich, and Alexander Potkin having sex with the same woman in the same apartment. Shenderovich described this as a honey trap arranged by the Russian government.[33]