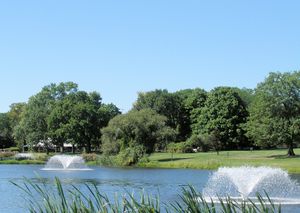 Pond behind Messick and Lord Halls.

Educational Testing Service (ETS), founded in 1947, is the world's largest private nonprofit educational testing and assessment organization.[2] It is headquartered in Lawrence Township, New Jersey, but with a Princeton address.

ETS develops various standardized tests primarily in the United States for K–12 and higher education, and it also administers international tests including the TOEFL (Test of English as a Foreign Language), TOEIC (Test of English for International Communication), Graduate Record Examination (GRE) General and Subject Tests, and The Praxis test Series — in more than 180 countries, and at over 9,000 locations worldwide. Many of the assessments it develops are associated with entry to US tertiary (undergraduate) and quaternary education (graduate) institutions, but it also develops K–12 statewide assessments used for accountability testing in many states, including California, Texas, Tennessee and Virginia. In total, ETS annually administers 20 million exams in the U.S. and in 180 other countries.

ETS is a U.S.-registered 501(c)(3) non-profit organization created in 1947 by three other nonprofit educational institutions: the American Council on Education (ACE), The Carnegie Foundation for the Advancement of Teaching, and The College Entrance Examination Board.[2] ETS was formed in 1947 to take over the testing activities of its founders (whose organizations were not well suited to running operational assessment programs), and to pursue research intended to advance educational measurement and education.[3][4] Among other things, ACE gave to the new organization the Cooperative Test Service and the National Teachers Examination; Carnegie gave the GRE; and the College Board turned over to ETS the operation (but not ownership) of the SAT for graduating high school students.

Members of the ETS staff have been among the presidents of the National Council on Measurement in Education (NCME); the Psychometric Society; the Measurement and Evaluation Division of the American Educational Research Association (AERA); the Evaluation, Measurement and Statistics Division of the American Psychological Association (APA); the APA Developmental Psychology Division; and the Jean Piaget Society. They have been among the executive editors of the Journal of Educational Measurement, Journal of Educational and Behavioral Statistics, Educational Evaluation and Policy Analysis, Journal of Educational Psychology, Journal of Applied Developmental Psychology, and Discourse Processes. Major citations have included the APA Distinguished Contributions to Knowledge Award (Norman Frederiksen, 1984), the APA Distinguished Scientific Contribution Award (Frederic Lord, 1988); the AERA E.F. Lindquist Award (William Turnbull, 1981; Frederic Lord, 1988; Samuel Messick, 1994; Paul Holland, 2000; Wendy Yen, 2008); the NCME Career Contributions to Educational Measurement Award (Frederic Lord, 1990; Paul Holland, 2004; Neil Dorans, 2010); and the Jean Piaget Society's Lifetime Achievement Award (Irving Sigel, 2002); among many other awards.

The high caliber of scientific staff allowed ETS to produce both new knowledge and methodology, especially in measurement and statistics, much of which has been taken up by assessment organizations around the world. Among the key scientific contributions were:

To help support its nonprofit educational mission, ETS, like many other nonprofits, conducts business activities that are unrelated to that mission (e.g., employment testing). Under US tax law, these activities may be conducted (within limits) by the nonprofit itself, or by for-profit subsidiaries.[23] Most of the "off-mission" work conducted by ETS is carried out by such wholly owned, for-profit subsidiaries as Prometric,[26] which delivers tests for hundreds of third-party clients, ETS Global BV, which contains much of the international operations of the company, ETS China, and ETS Canada.

About 25% of the work carried out by ETS is contracted by the College Board, a private, nonprofit membership association of universities, colleges, school districts, and secondary schools. The most popular of the College Board's tests is the SAT, taken by more than 3 million students annually. ETS also develops and administers The College Board's Preliminary SAT/National Merit Scholarship Qualifying Test (PSAT/NMSQT) and the Advanced Placement program, which is widely used in US high schools for advanced course credit.

Since 1983, ETS has conducted the National Assessment of Educational Progress (NAEP), known as the "Nation's Report Card," under contract to the US National Center for Education Statistics. NAEP is the only nationally representative and continuing assessment of what US students know and can do. ETS is responsible for coordination among the nine NAEP Alliance contractors, for item development, and for design, data analysis, and reporting.[27]

In addition to the contract work that ETS undertakes for nonprofit and government entities like the College Board, the National Center for Education Statistics, and state education departments, the organization offers its own tests. These tests include the Graduate Record Examinations (GRE) (for graduate and professional school admissions), the Test of English as a Foreign Language (TOEFL) (for post-secondary admissions), the Test of English for International Communication (TOEIC) (for use by business and industry), and the Praxis Series (for teacher licensure and certification).[28]

In England and Wales ETS Europe, a unit of the ETS Global for-profit subsidiary, was contracted to mark and process the National Curriculum assessments on behalf of the government. ETS Global took over this role in 2008 from Edexcel, a subsidiary of Pearson, which had encountered significant and repeated problems in carrying out the marking and processing contract.[29][30][31] As was the case for Edexcel, The first year of ETS Global's operation was struck by a number of problems, including the late arrival of scripts to examiners, a database of student entries being unavailable,[32] and countrywide reports of problems with the marking of the papers. The opposition Conservative party criticized the awarding of the contracts to ETS, and produced a dossier listing previous problems with ETS's service.[33] The ETS contract with the QCA was terminated in August 2008, with an agreement to pay back £19.5m and cancel invoices worth £4.6m.[34] Subsequently, the contract for National Curriculum assessment marking and processing was again awarded to Edexcel. Like the two prior contracts, the Edexcel contract has encountered significant quality problems[35] and the tests themselves, the focus of longstanding controversy in the English education community and among the public, have been subjected to a massive boycott by schools.[36]

In 2009, ETS released the My Credentials Vault Service with Interfolio, Inc to "simplify the entire letter of recommendation process".[37]

ETS has been criticized for being a “highly competitive business operation that is as much multinational monopoly as nonprofit institution”.[38] Due to its legal status as a non-profit organization, ETS is exempt from paying federal corporate income tax on many, but not all, of its operations. Furthermore, it does not need to report financial information to the Securities and Exchange Commission, though it does annually report detailed financial information to the IRS on Form 990, which is publicly available.[39]

Problems administering England's national tests in 2008 by ETS Europe were the subject of thousands of complaints recorded by the Times Educational Supplement.[41] Their operations were also described as a "shambles" in the UK Parliament, where a financial penalty was called for.[42] Complaints included papers not being marked properly, or not being marked at all[43] and papers being sent to the wrong schools or lost completely.[44] It has even been suggested that the quality of service is so poor that the Department for Children, Schools and Families (formerly the Department for Education and Skills) might not be able to publish the 2008 league tables of school performance.[45] However, the contract was ended by "mutual consent".[46] The UK government asked Lord Sutherland to conduct an inquiry into the failure of the 2008 tests. The report included in its main findings:

In 1983, students of James A. Garfield High School in East Los Angeles, California, achieved unexpectedly high exam results on the ETS Advanced Placement Exam. ETS implied that the students may have cheated to obtain such results based on common mistakes across different exams. The students were required to prove their abilities and innocence by taking a second exam, which they did successfully.[47]

Americans for Educational Testing Reform (AETR) claims that ETS is violating its non-profit status through excessive profits, executive compensation, and governing board member pay (which the IRS specifically advises against[48]). AETR further claims that ETS is acting unethically by selling test preparation materials, directly lobbying legislators and government officials, and refusing to acknowledge test-taker rights. It also criticises ETS for forcing GRE test-takers to participate in research experiments during the actual exam.[49] It has also come under criticism for paying its part-time employees, most of whom are drawn from the less than 10% of the U.S. population with graduate degrees, a modest $15 an hour (with no benefits), to grade the essay component of their standardized exams.

In 2014 the BBC reported that the Home Office has suspended English language tests run by ETS after a BBC investigation uncovered systematic fraud in the student visa system. Secret filming of government-approved English exams needed for a visa showed entire rooms of candidates having the tests faked for them [50]