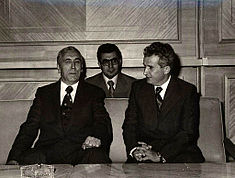 Edward Gierek (Polish pronunciation: [ˈɛdvart ˈɡʲɛrɛk]; 6 January 1913 – 29 July 2001) was a Polish communist politician. Gierek replaced Władysław Gomułka as First Secretary of the ruling Polish United Workers' Party in the Polish People's Republic.[1] He was removed from power after labor strikes led to the Gdańsk Agreement between the communist state and the workers of the Solidarity free trade union.[2]

Gierek was born in Porąbka, outside of Sosnowiec into a coal mining family.[3] He lost his father to a mining accident in a pit at the age of four. His mother married again and emigrated to northern France, where he was raised. He joined the French Communist Party in 1931 and was later deported to Poland for organizing a strike.[4] After his military service in Stryj, Galicia, Gierek went to Belgium in 1934, where he joined the Communist Party of Belgium while working in the coal mines of Waterschei. During World War II, he remained active in the Communist Party of Belgium.[5] Gierek returned to Poland in 1948[6] and rose through the party ranks to become by 1957 a member of the Polish parliament. As first secretary of the Katowice voivodship party organization (1957–70), Gierek created a personal power base and became the recognized leader of the young technocrat faction of the party. When rioting over economic conditions broke out in late 1970, Gierek replaced Władysław Gomułka as party first secretary and de facto dictator of communist Poland.[1] Gierek promised economic reform and instituted a program to modernize industry and increase the availability of consumer goods, doing so however mostly through foreign loans.[7] His good relations with Western politicians, especially France's Valéry Giscard d'Estaing and West Germany's Helmut Schmidt, were a catalyst for his receiving western aid and loans.

The standard of living increased markedly in the Poland of the 1970s, and for a time he was hailed a miracle-worker. The economy, however, began to falter during the 1973 oil crisis, and by 1976 price increases became necessary. New riots broke out in June 1976, and although they were forcibly suppressed, the planned price increases were canceled.[8] In 1979, he reluctantly allowed Pope John Paul II to make his first papal visit to Poland (2–10 June) after Brezhnev first warned him not to allow this visit, then warned him not to "do anything that he (Gierek) would regret". High foreign debts, food shortages, and an outmoded industrial base compelled a new round of economic reforms in 1980. Once again, price increases set off protests across the country, especially in the Gdańsk and Szczecin shipyards. Gierek was forced to grant legal status to Solidarity and to concede the right to strike. (Gdańsk Agreement).

Shortly thereafter, in early September 1980, he was replaced as party leader by Stanisław Kania and removed from power.[2]

Gierek was jailed for a year in December 1981 by the next first secretary, General Wojciech Jaruzelski, who introduced martial law on 13 December 1981 in an effort to make him a scapegoat for the economic troubles Poland was experiencing.[9]

Gierek married Stanisława, née Jędrusik, and they had two sons, one of whom is MEP Adam Gierek. Edward Gierek died in 2001 of a lung illness in Cieszyn, near the southern mountain resort of Ustroń where he spent his last years.

In 1990 two books, each based on extended interviews of Gierek by Janusz Rolicki, were published in Poland and became bestsellers.[10]

Polish society is divided in its assessment of Gierek. His regime is fondly remembered by some for the increase in the standard of living Poland experienced in the 1970s under his rule. Others emphasize that this increase was only made possible by unwise and unsustainable foreign loans, which lead directly to the economic crisis of the 1980s.