Born in New York City, Zuroff moved to Israel in 1970 after completing his undergraduate degree in history (with honors) at Yeshiva University. He obtained an M.A. degree in Holocaust studies at the Institute of Contemporary Jewry of the Hebrew University, where he also completed his Ph.D., which chronicles the response of Orthodox Jewry in the United States to the Holocaust and focuses on the rescue attempts launched by the Vaad ha-Hatzala rescue committee established by American Orthodox rabbis in 1939. In 2000, Yeshiva University Press and KTAV Publishing House published his study of the history of the Vaad ha-Hatzala, which was awarded an Egit Grant for Holocaust and Jewish Resistance Literature by the Israeli General Federation of Labor (Histadrut) and also received the 1999-2000 Samuel Belkin Literary Award for the best book published by a Yeshiva University alumnus in the field of Jewish studies.

In 1978, he was invited to be the first director of the Simon Wiesenthal Center in Los Angeles,[1] where he played a leading role in establishing the Center’s library and archives and was historical advisor for the Center’s Academy award-winning documentary Genocide. He returned to Israel in 1980, where he served as a researcher for the U.S. Justice Department’s Office of Special Investigations.[1] His efforts assisted in the preparation of cases against numerous Nazi war criminals living in the United States.[1]f

He rejoined the Wiesenthal Center in 1986 and uncovered the postwar escape of hundreds of Nazi war criminals to Australia, Canada, Great Britain and other countries.[1] He continued to coordinate the center's international efforts to bring Holocaust perpetrators to justice. These efforts have influenced the passage of special laws in Canada (1987), Australia (1989) and Great Britain (1991) which enable the prosecution in those countries of Nazi war criminals.

Since the dismemberment of the Soviet Union and the fall of Communism, Zuroff has played a major role in the efforts to convince Lithuania, Latvia, and Estonia and other post-Communist societies to confront the widespread complicity of their nationals in the crimes of the Holocaust and to prosecute local Nazi collaborators. His public advocacy on these issues has been instrumental in the submission by Lithuania and Latvia of indictments (Lileikis, Gimzauskas, Dailide) and/or extradition requests (Kalejs, Gecas) against local Holocaust perpetrators.

In 1991, he exposed the rehabilitation of Nazi war criminals in Lithuania and led the campaign to stop this process. Zuroff was appointed by the then Foreign Minister Shimon Peres to serve on the joint Israeli-Lithuanian commission of inquiry established to deal with this issue, which has succeeded to date in achieving the cancellation by the Lithuanian authorities of approximately 200 rehabilitations granted to individuals who had participated in the murder of Jews during the Holocaust. In 2000 he exposed the rehabilitations granted by the government of Latvia to Nazi war criminals and has led the efforts to cancel these pardons.

Zuroff played an important role in the exposure, arrest, extradition and prosecution of Dinko Šakić, the former commandant of the Ustasha concentration camp Jasenovac. In early October 1999, Šakić, who lived for more than 50 years in Argentina, was sentenced in Zagreb to 20 years’ imprisonment (which was the maximum penalty under Croatian law at the time) for his crimes in the first-ever trial of a Nazi war criminal in a post-Communist country. 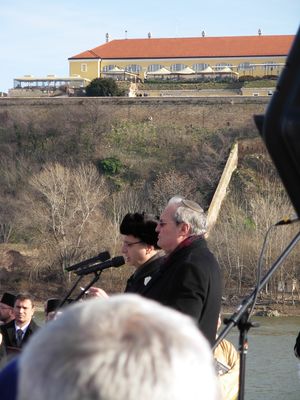 In his book Occupation: Nazi-Hunter; The Continuing Search for the Perpetrators of the Holocaust (KTAV; Hoboken, 1994), Zuroff chronicles the belated efforts to prosecute Nazi war criminals in western democracies and explains the rationale for such efforts several decades after the crimes. The book was published in German by Ahriman Verlag. Starting in June 1999, Zuroff's activities as a Nazi-hunter were the subject of several television documentaries. The first, entitled The Nazi-Hunter, was produced by ZDF (German Channel 2) in 1999; the second, entitled The Last Nazi-Hunter, was produced by SWR (German Channel 1-regional station) in 2004 and the third, The Final Hunt for the Nazis, by fr (France 3) (Channel 3), was broadcast in December 2005.

In fall 2009, his hunt for Dr. Aribert Heim, who committed war crimes in the Mauthausen concentration camp, was the subject of a BBC documentary entitled The Search for Dr. Death, and a fifth documentary Tzayad ha-Natzim ha-Acharon (The Last Nazi-Hunter), was broadcast on Israeli Channel 10 on Holocaust Memorial Day in 2012. His second book on the hunt for Nazi war criminals, Chasseur de nazis (Paris: Michel-Lafon, 2008), written together with French journalist Alexandre Duyck, continues with the story of the renewed efforts spearheaded by Zuroff to hold Holocaust perpetrators accountable, especially in the wake of the breakup of the Soviet Union and the fall of Communism in Eastern Europe, and focuses on the results achieved by "Operation: Last Chance". That book was published in Serbian by the Zavod za udzbenike publishing company under the title Lovac na naciste in 2009 and in Polish by Wydawnictwo Dolnoslaskie under the title Lowca Nazistow in 2010.

In 1995 and 1996, Zuroff was invited to Rwanda to assist the local authorities in their efforts to bring to justice the perpetrators of the genocide which took place in that country in spring 1994, and he has served as an official advisor to the Rwandan government.

In recent years, Zuroff has lectured extensively to audiences all over the world regarding the efforts to bring Nazi war criminals to justice. During the years 1992-1999, he served in the Education Corps of the Israeli Defense Forces (reserves) and lectured to thousands of soldiers about his work.

In 2002, together with Aryeh Rubin, the founder of the Targum Shlishi Foundation of Miami, Florida, Zuroff launched Operation Last Chance, which offers financial rewards for information which will facilitate the prosecution and punishment of Nazi war criminals. To date, the project has been initiated in Lithuania, Latvia, Estonia (all in 2002); Poland, Romania, Austria (2003); Croatia, Hungary (2004) and Germany (2005).

Charles Zentai, who is accused of murdering an 18-year-old Jew, was located by Dr. Zuroff and the Hungarian government asked for his extradition from Australia to stand trial in Budapest.[4]

In 2006, his exposure in Budapest of convicted but unpunished Hungarian gendarme war criminal Dr. Sándor Képíró, who was said to be among the officers responsible for the mass murder of approximately 2,000 civilians in the city of Novi Sad, led to a criminal investigation against him, with his trial opening on May 5, 2011. A lawsuit by Képíró against Zuroff for libel, was denied.[5] On July 18, 2011, the first-degree judgment declared Sándor Képíró's innocence, but the prosecution appealed the sentence. Kepiro died in early September 2011, before the appeal was heard.

On July 6, 2008, Zuroff headed to South America as part of a public campaign to capture Aribert Heim.[6] He elaborated on July 15, 2008, that he was sure Heim was alive and the groundwork had been laid to capture him within weeks.[7]

Zuroff, who continued the hunt for the Nazi war criminal Aribert Heim after the death of Simon Wiesenthal in 2005, has been lukewarm in his reaction to the reported death of Heim in Cairo in 1992. He observed in February 2009 that:

There's no body, no corpse, no DNA, no grave.... Keep in mind these people [Heim's children] have a vested interest in being declared dead - it's a perfectly crafted story; that's the problem, it's too perfect.[8]

Zuroff concedes, however, that Heim had undoubtedly lived in hiding in Egypt.[9] Aribert Heim had reportedly killed "hundreds of inmates at the Mauthausen concentration camp in Austria by injecting gasoline into their hearts and performing surgery and severing organs without anaesthesia" notes Zuroff.[9] In a 2011 interview he called Heim, "his biggest failure." In the light of fresh revelations about the extent to which the CIA and West German intelligence co-operated with Nazi criminals after the war, Zuroff said he thought it quite possible that Heim worked for West German intelligence and that this may have been the reason that he was never prosecuted.[10]

In recognition of his efforts as a Nazi-hunter and Holocaust scholar, Zuroff was nominated by Serbian President Boris Tadic and the members of parliament of the Democratic Party of Serbia as a candidate for the 2008 Nobel Peace Prize.

On January 22, 2009, he was granted the honorary citizenship of the Serbian city of Novi Sad, in appreciation for the exposure of Sándor Képíró, who allegedly helped organize the murder of the city's Jews.[11]

On January 15, 2010, Zuroff was decorated with the Order of Prince Trpimir by Croatian President Stjepan Mesić for special contributions against historical revisionism and for the reaffirming of antifascist foundations of the modern Republic of Croatia.[12]

He currently resides with his wife in Efrat. They have four children and eleven grandchildren.[1]

Year 2013 reactions to the 1942 Beisfjord Massacre