The Egyptian Navy is the maritime branch of the Egyptian Armed Forces. It is the largest navy in the Middle East and Africa, and is the seventh largest in the world measured by the number of vessels.[3] The navy's missions include protection of more than 2,000 kilometers of coastline of the Mediterranean Sea and the Red Sea, defense of approaches to the Suez Canal, and support for army operations. The majority of the Egyptian Navy was created with the help of the Soviet Union in the 1960s. The navy received ships in the 1980s from China and other, western, sources. In 1989, the Egyptian Navy had 18,000 personnel as well as 2,000 personnel in the Coast Guard.[4] 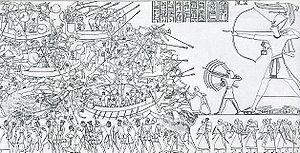 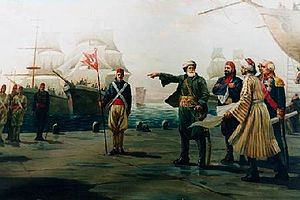 In the early 1800s, Egypt under Muhammad Ali Pasha developed a modern European-style army and navy. After intervening in the Greek War of Independence at Ottoman Turkey's request, the Egyptian navy was destroyed in 1827 at the Battle of Navarino by the fleets of Great Britain, France and Russia. With the Egyptian army in Greece now isolated, Muhammad Ali was forced to make terms with the British and withdraw a year later.

A replacement fleet was built for the First Egyptian-Ottoman War in 1831, and landed troops at Jaffa in support of the main Egyptian army marching into Syria. In the Second Egyptian–Ottoman War in 1839, following Egyptian victory in the Battle of Nezib, the Ottoman fleet sailed to Alexandria and defected to the Egyptian side. However, these victories provoked decisive European intervention to support the Turks, and while Muhammad Ali's dynasty continued to reign, Egypt ended up effectively a British colony until the 1950s.

The Egyptian navy was only peripherally involved in the series of conflicts with Israel. During the Suez Crisis, Egypt dispatched the Ibrahim el Awal, an ex-British Hunt class destroyer, to Haifa with the aim of shelling that city's coastal oil installations. On 31 October the Ibrahim el Awal reached Haifa and began bombarding the city but was driven off by a French warship and then pursued by the Israeli destroyers INS Eilat and INS Yaffo which, with the help of the Israeli Air Force, captured the ship.[6] Egyptian destroyers and torpedo boats engaged larger British vessels in a move aimed at undermining the amphibious operations of the British and French. On the night of 31 October in the northern Red Sea, the British light cruiser HMS Newfoundland challenged and engaged the Egyptian frigate Domiat, reducing it to a burning hulk in a brief gun battle. The Egyptian warship was then sunk by escorting destroyer HMS Diana, with 69 surviving Egyptian sailors rescued.[7] 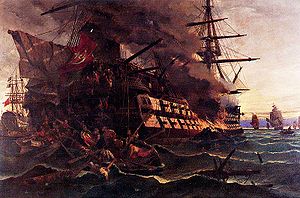 The Egyptian Navies blockade of Israeli ships in the Strait of Tiran that were headed toward the Israeli port of Eilat was on of the main causes of the Six-Day War. During the war, the Israeli Navy landed six combat divers from the Shayetet 13 naval commando unit to infiltrate Alexandria harbor. The divers sank an Egyptian minesweeper before being taken prisoner. Both Egyptian and Israeli warships made movements at sea to intimidate the other side throughout the war, but did not engage each other. However, Israeli warships and aircraft did hunt for Egyptian submarines throughout the war.

In October 1967, a few months after the cease-fire, the Egyptian Navy was the first navy in history to sink a ship using anti-ship missiles, when an Egyptian Komar class fast-attack craft sank the Israeli destroyer INS Eilat with two direct hits.[8] This was a milestone of modern naval warfare, and for the first time anti-ship missiles showed their potential, sinking the destroyer 17 km off Port Said.

On the night of 15–16 November 1969, Egyptian Navy frogmen attacked the port of Eilat and caused severe damages to the armed transport ship "Bat Yam".[9] On 5–6 February 1970, the Frogmen attacked the Israeli landing ships at the same port and same piers causing severe damages to the landing ships "Bait Shivaa" and transport armed ships "Hydroma".[9] On 8 March 1970, the Frogmen attacked the Israeli oil drill "Keting" at the port of Abidjan in Ivory Coast believing that Israel had bought this oil drill from the Netherlands for the purposes of oil exploration in the Suez Gulf.[9]

In the Yom Kippur War, Egypt blocked commercial traffic to Eilat in the Gulf of Aqaba by laying mines; it also attempted to blockade Israeli ports on the Mediterranean.[4] The navy also used the coastal artillery to the east of Port Fouad to support the Egyptian Army in order to prepare for the assault on the Suez Canal.[9] In the Battle of Baltim, three Egyptian Osa-class missile boats were sunk.

The Egyptian navy's headquarters and main base is at Alexandria on the Mediterranean Sea with other Mediterranean naval bases at Port Said and Mersa Matruh.

Egypt naval bases on the Red Sea are Hurghada, Safaga, Berenice and Suez. 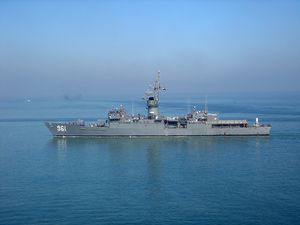 A Knox class frigate, with the flag of Egyptian Navy.

The Egyptian Navy will be restructured into two different fleets, one for the Mediterranean sea and the other for the Red Sea. This in a context where the safety of shipping in the Red Sea is becoming increasingly important.[10] 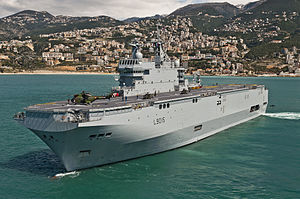 The two former Russian vessels were acquired by Egypt for roughly 950 million euros.

See: List of ships of the Egyptian Navy for detailed information about modifications, and major specifications

The Egyptian Air Force equipment that supports the navy includes the following:

In mid-1988 the air force also took delivery of the first of 6 Grumman E-2C Hawkeye aircraft, now 8 units are operational and are used to secure the maritime borders among other missions; it also operates 6 Beechcraft 1900C aircraft for maritime surveillance purposes with search and side-looking radar. The Egyptian Navy also uses Mil Mi-8 and Sea King helicopters to transport troops.[11] 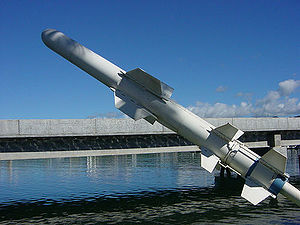 The Egyptian Coast Guard is responsible for the onshore protection of public installations near the coast and the patrol of coastal waters to prevent smuggling. Currently consists of one hundred five ships and craft.

The Egyptian Navy has adopted the 60m diesel-powered Ambassador MK III fast missile patrol craft. The construction of the boats began in spring 2001. Egypt already had an older version of the Ambassador patrol craft in service, but the new boats would contain an update in design meant to make the vessels more resistant to radar detection. Design was conducted with the assistance of Lockheed Martin. Throughout recent years, Egypt has been constructing various Ramos-grade shipyards, which are capable of making more recent vessels like larger fast attack crafts, low-grade aircraft carriers (such as Oryx-class or Nimitz-class) and nuclear submarines, though none of the aforementioned vessles have been constructed there.

The navy is currently undergoing a modernization of its surface fleet. On 16 February 2015, the Egyptian Navy ordered one FREMM multipurpose frigate from the French shipbuilder DCNS to enter service before the opening of the New Suez Canal, as part of a larger deal (including 24 Rafales and a supply of missiles) worth €5.2bn.[14][15] Egypt has also signed a €1bn contract with DCNS to buy four Gowind 2,500 ton corvettes with an option for two more.[16] The ageing submarine fleet is to be replaced starting in 2016 when the first of four Type 209 submarine's worth €920 million start arriving from Germany.[17]

On 7 August 2015, Le Monde reported that Egypt and Saudi Arabia are in discussions with France to purchase the two amphibious assault ship Mistral class originally intended for Russia. Le Monde quoted a French diplomatic source as confirming that French President François Hollande discussed the matter with Egyptian President Abdel Fattah el-Sisi during his visit to Egypt during the inauguration of the New Suez Canal in Ismailia.[18][19] On 24 September 2015, the French presidency announced that an agreement had been reached with Egypt for the supply of the two Mistrals.[20][21]