The Eighth Army was a field army and one of the best-known formations of the British Army during the Second World War, fighting in the North African and Italian campaigns of World War II.

The Eighth Army was formed from the Western Desert Force in September 1941 and put under the command of Lieutenant-General Sir Alan Cunningham. It gained its number from the fact that the French Army had fielded seven field armies previously in the same war, whereas the British had fielded the British Expeditionary Force[1][citation needed].

By the time the army was fighting the Second Battle of El Alamein, it had reached a size of over 220,000 men in 10 divisions and several independent brigades.[4] 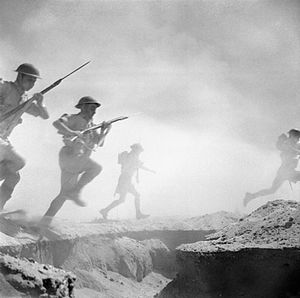 Infantry advance during the Battle of El Alamein.

The Eighth Army first went into action as an Army as part of Operation Crusader, the Allied operation to relieve the besieged city of Tobruk, on 17 November 1941, when it crossed the Egyptian frontier into Libya to attack Erwin Rommel's Panzer Army Africa.[5]

On 26 November the Commander-in-Chief Middle East Command, General Sir Claude Auchinleck, replaced Cunningham with Major-General Neil Ritchie,[6] following disagreements between Auchinleck and Cunningham. Despite achieving a number of tactical successes, Rommel was forced to concede Tobruk and was pushed back to El Agheila by the end of 1941. In February 1942 Rommel had regrouped his forces sufficiently to push the over-extended Eighth Army back to the Gazala line, just west of Tobruk. Both sides commenced a period of building their strength to launch new offensives but it was Rommel who took the initiative first, forcing the Eighth Army from the Gazala position.

Ritchie proved unable to halt Rommel and was replaced when Auchinleck himself took direct command of the army. The Panzer Army Afrika were eventually stopped by Auchinleck at the First Battle of El Alamein. Auchinleck, wishing to pause and regroup the Eighth Army, which had expended a lot of its strength in halting Rommel, came under intense political pressure from British Prime Minister Winston Churchill to strike back immediately. However, he proved unable to build on his success at Alamein and was replaced as Commander-in-Chief Middle-East in August 1942 by General Harold Alexander and as Eighth Army commander by Lieutenant-General William Gott. Gott was killed in an air crash on his way to take up his command and so Lieutenant-General Bernard Montgomery was appointed in his place. Alexander and Montgomery were able to resist the pressure from Churchill, building the Army's strength and adding a pursuit formation, X Corps, to the Army's XIII and XXX Corps.

At the beginning of November 1942 the Eighth Army defeated Rommel in the decisive Second Battle of El Alamein, pursuing the defeated Axis army across Libya and reaching the Mareth defensive line on the Tunisian border in February 1943, where it came under the control of 18th Army Group. The Eighth Army outflanked the Mareth defences in March 1943 and after further fighting alongside the British First Army, the other 18th Army Group component which had been campaigning in Tunisia since November 1942, the Axis forces in North Africa surrendered in May 1943. 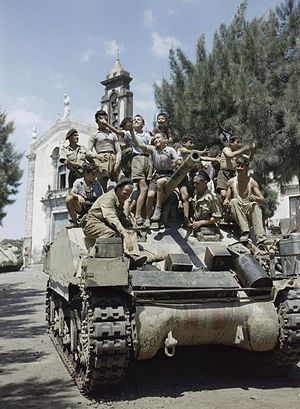 Tanks of the County of London Yeomanry, part of the British 4th Armoured Brigade, of the Eighth Army in the village of Milo near Catania in Sicily, August 1943 with local children on board.

The Eighth Army then participated in the Italian Campaign which began with the Allied invasion of the island of Sicily, code-named Operation Husky. When the Allies subsequently invaded mainland Italy, elements of the Eighth Army landed in the 'toe' of Italy in Operation Baytown and at Taranto in Operation Slapstick. After linking its left flank with the U.S. Fifth Army, led by Mark W. Clark, which had landed at Salerno on the west coast of Italy south of Naples, the Eighth Army continued fighting its way up Italy on the eastern flank of the Allied forces. Together these two armies made up the Allied Armies in Italy (later redesigned 15th Army Group, under General Sir Harold Alexander. 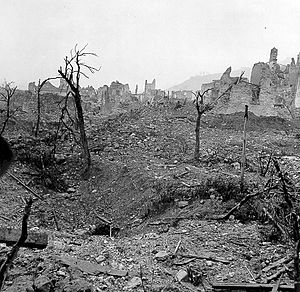 Aftermath of the Battle of Monte Cassino.

Following three unsuccessful attempts in early 1944 by the U.S. Fifth Army to break through the German defensive positions known to the Allies as the Winter Line, the Eighth Army was covertly switched from the Adriatic coast in April 1944 to concentrate all forces, except the V Corps, on the western side of the Apennine Mountains alongside the U.S. Fifth Army in order to mount a major offensive with them. This fourth Battle of Monte Cassino was successful with the Eighth Army breaking into central Italy and the Fifth Army entering Rome in early June.

After the Allied capture of Rome the Eighth Army continued the fight northwards through central Italy to capture Florence. The end of the summer campaign found Allied forces butting up against the Gothic Line. The Eighth Army returned to the Adriatic coast and succeeded in forcing the Gothic line defences, but ultimately the Allied forces could not break into the Po valley before the onset of winter forced an end to serious offensive operations. During October, Leese was reassigned to South East Asia Command, and Lieutenant-General Sir Richard L. McCreery, who had previously commanded X Corps, replaced him.

The final offensive in Italy saw the Eighth Army back in action. Working in conjunction with the U.S. Fifth Army, now commanded by Lucian K. Truscott, on its left flank, it cut off and destroyed, (during April), large parts of the opposing Army Group C defending Bologna and then made a rapid advance through northeast Italy and into Austria. Problems occurred where British and Yugoslavian forces met. Josip Broz Tito's forces were intent on securing control of the area of Venezia Giulia. They arrived before British forces, and were very active in trying to prevent the establishment of military government in the manner that had applied to most of the rest of Italy. They even went as far as to restrict supplies through to the British zone of occupation in Austria and tried to take over part of that country as well. On 2 May 1945, the 2nd New Zealand Division of the Eighth Army liberated Trieste, and that same day, the Yugoslav Fourth Army, together with Slovene 9th Corpus NOV entered the town. During the fighting on the Italian Front the Eighth Army had, from 3 September 1943 until 2 May 1945, suffered 123,254 casualties.

In its early days, the Eighth Army had seen many tribulations. However, since the Second Battle of El Alamein, the worst that could be said of its operations was that they degenerated into temporary stalemates. Its advance from El Alamein to Tunisia was one of the greatest military logistical feats of all time, and it had distinguished itself fighting under difficult conditions during the campaign in Italy. It ended its days by being redesignated British Forces in Austria; controlling the British forces occupying part of that country. In this capacity Trevor Howard appears in the 1949 film, The Third Man, as "Major Calloway", an Eighth Army Royal Armoured Corps officer.

Corps which passed through the Eighth Army

After the war, veterans from the Eighth Army organized Annual Reunions at the Royal Albert Hall. Then, in the late 1970s, the Eighth Army Veterans Association was formed. At the height of its membership, there were over 35 branches, with a particular strength in the North West of the UK.[7] Reunions were held at the Winter Gardens in Blackpool. Eventually, in 2002 the National Association disbanded. However, the Manchester Branch decided to continue, under the title of Eighth Army Veterans, City of Manchester. It has an active membership, who hold regular meetings and events. Its newsletter, "The Manchester Veteran", is still distributed to 300 ex-servicemen and women, or their dependants, and is a lively forum for the community it represents. A facility exists for Schools Talks to be given, in the Manchester–North Cheshire area.