The unit first activated on 10 June 1944 in the United States, being commanded by Lieutenant General Robert Eichelberger. The Eighth Army took part in many of the amphibious landings in the Southwest Pacific Theater of World War II, eventually participating in no less than sixty of them. The first mission of the Eighth Army, in September 1944, was to take over from the U.S. Sixth Army in New Guinea, New Britain, the Admiralty Islands and on Morotai, in order to free up the Sixth Army to engage in the Philippines Campaign (1944–45).

The 8th Army again followed in the wake of the Sixth Army in December, 1944 when it took over control of operations on Leyte Island on 26 December. In January, the Eighth Army entered combat on Luzon, landing the XI Corps on 29 January near San Antonio and the 11th Airborne Division on the other side of Manila Bay two days later. Combining with I Corps and XIV Corps of Sixth Army, the forces of Eighth Army next enveloped Manila in a great double-pincer movement. Eighth Army's final operation of the Pacific War was that of clearing out the southern Philippines of the Japanese Army, including on the major island of Mindanao, an effort that occupied the soldiers of the Eighth Army for the rest of the war.

Eighth Army was to have participated in Operation Downfall, the invasion of Japan. It would have taken part in Operation Coronet, the second phase of the invasion, which would have seen the invasion of the Kantō Plain on eastern Honshū. However, instead of invading Japan, Eighth Army found itself in charge of occupying it peacefully. Occupation forces landed on 30 August 1945, with its headquarters in Yokohama, then the HQ moved to the Dai-Ichi building in Tokyo. At the beginning of 1946, Eighth Army assumed responsibility for occupying all of Japan. Four quiet years then followed, during which the Eighth Army gradually deteriorated from a combat-ready fighting force into a somewhat soft, minimally-trained constabulary. Lieutenant General Walton H. Walker took command in 1948, and he tried to re-invigorate the Army's training, but he was largely unsuccessful. This situation was to have serious consequences in South Korea. 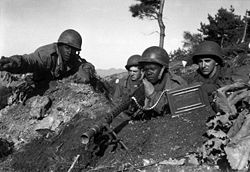 The peace of occupied Japan was shattered in June 1950 when North Korea invaded South Korea, igniting the Korean War. American naval and air forces quickly became involved in combat operations, and it was soon clear that American ground forces would have to be committed. To stem the North Korean advance, the occupation forces in Japan were thus shipped off to South Korea as quickly as possible, but their lack of training and equipment was telling, as some of the initial American units were destroyed by the North Koreans. However, the stage was eventually reached as enough units of Eighth Army arrived in Korea to make a firm front. The North Koreans threw themselves against that front, the Pusan Perimeter, and failed to break it. In the meantime, Eighth Army had reorganized, since it had too many divisions under its command for it to exercise effective control directly. The I Corps and the IX Corps were reactivated in the United States and then shipped to Korea to assume command of Eighth Army's subordinate divisions.

The stalemate was broken by the Inchon landings of the X Corps (tenth corps, consisting of soldiers and Marines). The North Korean forces, when confronted with this threat to their rear areas, combined with a breakout operation at Pusan, broke away and hastily retired.

Both South and North Korea were almost entirely occupied by United Nations forces. However, once American units neared the Yalu River and the frontier between North Korea and China, the Chinese intervened and drastically changed the character of the war. Eighth Army was decisively defeated at the Battle of the Chongchon River and forced to retreat all the way back to South Korea. American historian Clay Blair noted that the Eighth Army was left completely unprotected on its right flank due to the Turkish Brigade's retreat despite myths that arose about the Turks killing 200 enemies by bayonet. The defeat of the U.S. Eighth Army resulted in the longest retreat of any American military unit in history. General Walker was killed in a jeep accident and replaced by Lieutenant General Matthew Ridgway. The overstretched Eighth Army suffered heavily with the Chinese offensive, who were able to benefit from shorter lines of communication and with rather casually deployed enemy forces. The Chinese broke through the American defenses despite American air supremacy and the Eighth Army and U.N. forces retreated hastily to avoid encirclement. The Chinese offensive continued pressing American forces, which lost Seoul, the South Korean capital. Eighth Army's morale and esprit de corps hit rock bottom, to where it was widely regarded as a broken, defeated rabble.

General Ridgway forcefully restored Eighth Army to combat effectiveness over several months. Eight Army slowed and finally halted the Chinese advance at the battles of Chipyong-ni and Wonju. It then counter-attacked the Chinese, re-took Seoul, and drove to the 38th parallel where the front stabilized.

When General Ridgway replaced General of the Army Douglas MacArthur as the overall U.N. commander, Lieutenant General James Van Fleet assumed command of Eighth Army. After the war of movement during the first stages, the fighting in Korea settled down to a war of attrition. Ceasefire negotiations were begun at the village of Panmunjom in the summer of 1951, and they dragged on for two years. When the Military Demarcation Line was finally agreed to by the Korean Armistice Agreement, the Eighth Army had failed in its mission of capturing the Korean peninsular, but the realities of a limited war in a world of nuclear weapons had become obvious. South Korea and North Korea continued on as separate states. 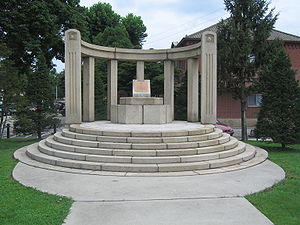 During the aftermath of the Korean War, the Eighth Army remained in South Korea. By the 1960s, I Corps, consisting of the 7th Infantry Division and the 2nd Infantry Division, remained as part of the Eighth Army. Then, in 1971, the 7th Infantry Division was withdrawn, along with the command units of I Corps, which were moved across the Pacific Ocean to Fort Lewis, Washington.[3] Later, in March 1977, a memo from President Jimmy Carter said "...American forces will be withdrawn. Air cover will be continued." Bureaucratic resistance from the Executive Branch, with support in Congress, eventually saw the proposal watered down. Eventually one combat battalion and about 2,600 non-combat troops were withdrawn.[4]

The headquarters of the Eighth Army is Yongsan Garrison, but it is scheduled to move southward to Camp Humphreys by 2019.[2] 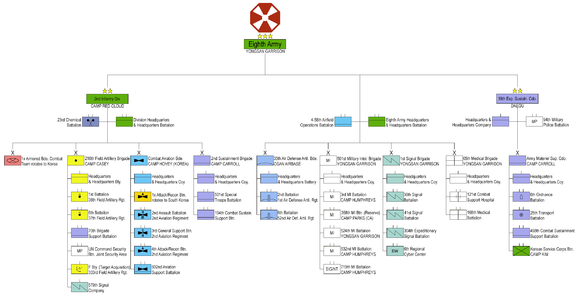