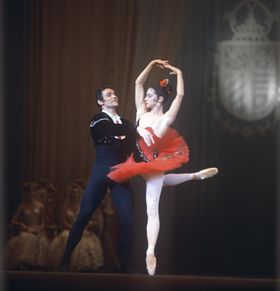 Ekaterina Maximova as Kitri and her husband Vladimir Vasiliev as Basilio in Don Quixote at the Bolshoi Theatre. (c. 1970)

Maximova was born in Moscow, Soviet Union. Maximova enjoyed her greatest successes in Giselle, Spartacus, Don Quixote, Cinderella and The Nutcracker. On 8 May 1966, Maximova was one of the Bolshoi stars who danced in the last program presented at the old Metropolitan Opera House on Thirty-ninth Street and Broadway. Maximova was coached by the legendary ballerina Galina Ulanova.

Maximova performed with the Bolshoi Ballet from 1958 until 1980, often performing opposite her husband Vladimir Vasiliev. She and her husband gained wide exposure for their appearances in Franco Zeffirelli's filmed version of Giuseppe Verdi's opera La traviata (1983). Both performed in Spanish costume in the divertissements composed for the equivalent of Act II, scene 2, though she with much diminished technique in comparison to her husband.

Her greatest successes were the roles of Kitri in Don Quixote, Clara (called Maria in the Bolshoi production) in The Nutcracker, and the title roles in Giselle and Cinderella. When the Bolshoi Ballet toured to the United States for the first time in 1959, Maximova also performed as a guest artist with the Metropolitan Opera in leading roles in The Stone Flower and other ballets. She later was one of the Bolshoi stars who danced in the last program presented at the old Metropolitan Opera House on Thirty-ninth Street and Broadway on 8 May 1966. Following her career as a dancer, Maximova was a coach with the ballet and a member of the GITIS Institute faculty.[2] On 27 April 2009 she died aged 70 in Moscow, Russia.

Maximova was the recipient of the Gold Medal at the Varna Competition in 1964 and the USSR State Prize in 1981. She was named a People's Artist of the USSR in 1973.