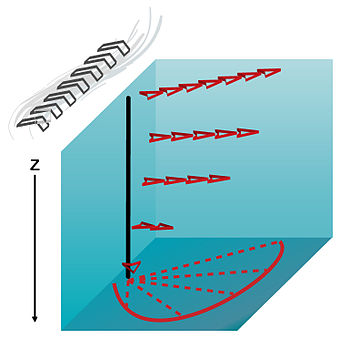 Ekman Transport is the net motion of fluid as the result of a balance between Coriolis and turbulent drag forces. In the picture above, the wind blowing North creates a surface stress and a resulting Ekman spiral is found below it in the water column.

Ekman transport, part of Ekman motion theory first investigated in 1902 by Vagn Walfrid Ekman, is the term given for the 90° net transport of the surface layer of a fluid (the layer affected by wind) by wind forcing. This phenomenon was first noted by Fridtjof Nansen, who recorded that ice transport appeared to occur at an angle to the wind direction during his Arctic expedition during the 1890s.[1] The direction of transport is dependent on the hemisphere: in the northern hemisphere, transport occurs at 90° clockwise from wind direction, while in the southern hemisphere it occurs at a 90° counterclockwise.[2]

Ekman theory explains the theoretical state of circulation if water currents were driven only by the transfer of momentum from the wind. In the physical world, this is difficult to observe because of the influences of many simultaneous current driving forces (for example, pressure and density gradients). Though the following theory technically applies to the idealized situation involving only wind forces, Ekman motion describes the wind-driven portion of circulation seen in the surface layer.[3][4]

Surface currents flow at a 45° angle to the wind due to a balance between the Coriolis force and the drags generated by the wind and the water.[5] If the ocean is divided vertically into thin layers, the magnitude of the velocity (the speed) decreases from a maximum at the surface until it dissipates. The direction also shifts slightly across each subsequent layer (right in the northern hemisphere and left in the southern hemisphere). This is called the Ekman spiral.[6] The layer of water from the surface to the point of dissipation of this spiral is known as the Ekman layer. If all flow over the Ekman layer is integrated, the net transportation is at 90° to the right (left) of the surface wind in the northern (southern) hemisphere.[2]

The simplified equations for the Coriolis force in the x and y directions follow from these assumptions:

is the wind stress,

is the East-West velocity, and

is the north-south velocity.

Integrating each equation over the entire Ekman layer:

represent the zonal and meridional mass transport terms with units of mass per unit time per unit length. Contrarily to common logic, north-south winds cause mass transport in the East-West direction.[8]

In order to understand the vertical velocity structure of the water column, equations 1 and 2 can be rewritten in terms of the vertical eddy viscosity term.

is the vertical eddy viscosity coefficient.

This gives a set of differential equations of the form

In order to solve this system of two differential equations, two boundary conditions can be applied:

Things can be further simplified by considering wind blowing in the y-direction only. This means is the results will be relative to a north-south wind (although these solutions could be produced relative to wind in any other direction):[9]