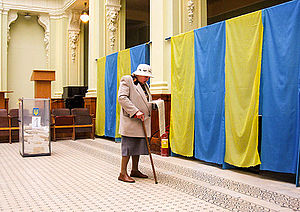 A woman with ballot during Ukrainian parliamentary election, 2007

Elections in Ukraine are held to choose the President (head of state), Verkhovna Rada (legislature body), and local governments. Referendums may be held on special occasions. Ukraine has a multi-party system, with numerous parties in which often not a single party has a chance of gaining power alone, and parties must work with each other to form coalition governments.

Elections in Ukraine are held to choose the President (head of state) and Verkhovna Rada (legislature). The president is elected for a five-year term. The Verkhovna Rada has 450 members and is also elected for a five-year term, but may be dissolved earlier by the president in the case of a failure to form a government.[1][2][3] Currently the Verkhovna Rada is elected using a mixed election system. Half of the representatives are elected from national closed party lists distributed between the parties using the Hare quota with a 5% threshold. The remaining half are elected from constituencies using first-past-the-post voting. This system was adopted for the 2012 elections[4][1] and was also used for the most recent (2014) election, as a new draft law moving to electing all members using open party lists failed to gather necessary support in the Rada.[5]

A snap poll must have a voter turnout higher than 50%.[6]

Presidential candidates must had residence in Ukraine for the past ten years prior to election day.[8]

The election laws were slightly modified on 20 December 2013.[9]

For more details on this topic, see Local elections in Ukraine.

See also: Imperative mandate (provision in the Constitution of Ukraine)

The parliamentary election law has been changed 4 times since 1991.[1][11] Before 1998 all the members of the Parliament were elected by single-seat constituencies (from each electoral district). In 1998 and in 2002 half of the members were elected by proportional representation (faction vote) and the other half by single-seat constituencies. In the 2006 and 2007 parliamentary election, all 450 members of the Verkhovna Rada where elected by party-list proportional representation with closed lists[12][13][14] (the same goes for local elections).[15]

In the elections since 2002 voters of Western and Central Ukrainian oblasts voted mostly for parties (Our Ukraine, Batkivshchyna, UDAR, Self Reliance, Radical Party, Petro Poroshenko Bloc and the People's Front) and presidential candidates (Viktor Yuschenko, Yulia Tymoshenko) with a pro-Western and state reform platform, while voters in Southern and Eastern oblasts of Ukraine voted for parties (CPU, Party of Regions and Opposition Bloc) and presidential candidates (Viktor Yanukovych) with a pro-Russian and status quo platform.[17][18][19][20][21][17][22] Although this geographical division is decreasing.[23][17][24] Till the 2014 Ukrainian parliamentary election the electorate of CPU and Party of Regions was very loyal to them.[21] But in the 2014 parliamentary election Party of Regions did not to participate (because of a perceived lack of legitimacy (of the election), because not every resident of the Donbas could vote) and the CPU come 1,12% short to overcome the 5% election threshold.[25][26]

A 2010 study by the Institute of Social and Political Psychology of Ukraine found that in general, Yulia Tymoshenko supporters are more optimistic compared with Viktor Yanukovych supporters. 46 percent of the Tymoshenko’s backers expect improvement in their well-being in the next year compared to 30 percent for Yanukovych.[27]

From 1994 till 2007 the average voter turnout for the Verkhovna Rada elections was 68.13%[28][29] The total voter turnout in the 2012 parliamentary elections was then the lowest ever with 57.99%;[30] The lowest turnout in these elections was in Crimea (with 49.46%), the highest in Lviv Oblast (67.13%).[30] In the 2014 parliamentary elections the official voter turnout was set (by the Central Election Commission of Ukraine) at 52.42%.[31] This figure was determined after the Central Electoral Commission deducted the eligible voters in areas were voting was impossible.[17] Because of the ongoing War in Donbass and the unilateral annexation of Crimea by Russia, the 2014 parliamentary elections were not held in Crimea and also not held in parts of Donetsk Oblast and Luhansk Oblast.[32][33] The lowest turnout in these elections was in Donetsk Oblast (with 32.4%), the highest in again in Lviv Oblast (70%).[34] According to Tadeusz Olszański, of the Centre for Eastern Studies, the low turnout in Donetsk Oblast (and also Luhansk Oblast) is explained by the end of an artificial increase of voter turnout there by Party of Regions officials.[17]

Despite a clear system for declaring donations to campaign funds, officials and experts say that Ukraine’s election law is consistently flouted, with spending from candidates’ official funds representing only a fraction of the amount truly spent while it’s rarely clear where the funding comes from.[38]

Early May 2009 the "The Committee of Voters of Ukraine" stated they believe that the use of the state’s administrative resources by political forces for their own national and local election campaigns is no longer a decisive factor in the outcome of Ukrainian elections.[39] According to a survey of 2,000 people conducted in October 2010 by two Ukrainian nongovernmental organizations, the Democratic Initiatives Fund and OPORA, one in five Ukrainians were willing to sell his or her vote in the then upcoming 2010 Ukrainian local elections.[40] But according to (then) Ukrainian Prime Minister Mykola Azarov these elections "were absolutely without the use of administrative resources, naturally. Nobody interfered with our citizens."[41]