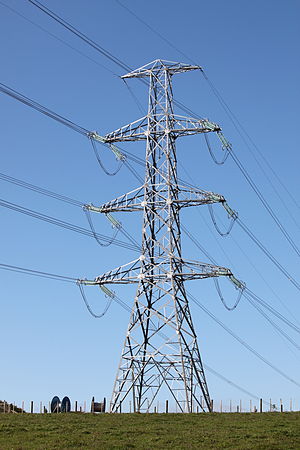 Electric power is transmitted on overhead lines like these, and also on underground high voltage cables.

Electric power is the rate at which electrical energy is transferred by an electric circuit. The SI unit of power is the watt, one joule per second.

Some devices can be either a source or a load, depending on the voltage and current through them. For example, a rechargeable battery acts as a source when it provides power to a circuit, but as a load when it is connected to a battery charger and is being recharged.

In the case of resistive (Ohmic, or linear) loads, Joule's law can be combined with Ohm's law (V = I·R) to produce alternative expressions for the amount of power that is dissipated:

where R is the electrical resistance.

In alternating current circuits, energy storage elements such as inductance and capacitance may result in periodic reversals of the direction of energy flow. The portion of power flow that, averaged over a complete cycle of the AC waveform, results in net transfer of energy in one direction is known as real power (also referred to as active power). That portion of power flow due to stored energy, that returns to the source in each cycle, is known as reactive power. The real power P in watts consumed by a device is given by

Real and reactive powers can also be calculated directly from the apparent power, when the current and voltage are both sinusoids with a known phase angle θ between them:

The ratio of real power to apparent power is called power factor and is a number always between 0 and 1. Where the currents and voltages have non-sinusoidal forms, power factor is generalized to include the effects of distortion

Electrical energy flows wherever electric and magnetic fields exist together and fluctuate in the same place. The simplest example of this is in electrical circuits, as the preceding section showed. In the general case, however, the simple equation P = IV must be replaced by a more complex calculation, the integral of the cross-product of the electrical and magnetic field vectors over a specified area, thus:

The result is a scalar since it is the surface integral of the Poynting vector.

The fundamental principles of much electricity generation were discovered during the 1820s and early 1830s by the British scientist Michael Faraday. His basic method is still used today: electricity is generated by the movement of a loop of wire, or disc of copper between the poles of a magnet.

For electric utilities, it is the first process in the delivery of electricity to consumers. The other processes, electricity transmission, distribution, and electrical power storage and recovery using pumped-storage methods are normally carried out by the electric power industry.

Electricity is mostly generated at a power station by electromechanical generators, driven by heat engines heated by combustion, geothermal power or nuclear fission. Other generators are driven by the kinetic energy of flowing water and wind. There are many other technologies that are used to generate electricity such as solar photovoltaics.

A battery is a device consisting of one or more electrochemical cells that convert stored chemical energy into electrical energy.[1] Since the invention of the first battery (or "voltaic pile") in 1800 by Alessandro Volta and especially since the technically improved Daniell cell in 1836, batteries have become a common power source for many household and industrial applications. According to a 2005 estimate, the worldwide battery industry generates US$48 billion in sales each year,[2] with 6% annual growth. There are two types of batteries: primary batteries (disposable batteries), which are designed to be used once and discarded, and secondary batteries (rechargeable batteries), which are designed to be recharged and used multiple times. Batteries come in many sizes, from miniature cells used to power hearing aids and wristwatches to battery banks the size of rooms that provide standby power for telephone exchanges and computer data centers.

The electric power industry provides the production and delivery of power, in sufficient quantities to areas that need electricity, through a grid connection. The grid distributes electrical energy to customers. Electric power is generated by central power stations or by distributed generation.

Many households and businesses need access to electricity, especially in developed nations, the demand being scarcer in developing nations. Demand for electricity is derived from the requirement for electricity in order to operate domestic appliances, office equipment, industrial machinery and provide sufficient energy for both domestic and commercial lighting, heating, cooking and industrial processes. Because of this aspect the industry is viewed as part of the public utility infrastructure.