Hydraulic or electric actuators add controlled energy to the steering mechanism, so the driver can provide less effort to turn the steered wheels when driving at typical speeds, and reduce considerably the physical effort necessary to turn the wheels when a vehicle is stopped or moving slowly. Power steering can also be engineered to provide some artificial feedback of forces acting on the steered wheels.

Representative power steering systems for cars augment steering effort via an actuator, a hydraulic cylinder that is part of a servo system. These systems have a direct mechanical connection between the steering wheel and the linkage that steers the wheels. This means that power-steering system failure (to augment effort) still permits the vehicle to be steered using manual effort alone.

Other power steering systems (such as those in the largest off-road construction vehicles) have no direct mechanical connection to the steering linkage; they require electrical power. Systems of this kind, with no mechanical connection, are sometimes called "drive by wire" or "steer by wire", by analogy with aviation's "fly-by-wire". In this context, "wire" refers to electrical cables that carry power and data, not thin-wire-rope mechanical control cables.

In other power steering systems, electric motors provide the assistance instead of hydraulic systems. As with hydraulic types, power to the actuator (motor, in this case) is controlled by the rest of the power-steering system.

Some construction vehicles have a two-part frame with a rugged hinge in the middle; this hinge allows the front and rear axles to become non-parallel to steer the vehicle. Opposing hydraulic cylinders move the halves of the frame relative to each other to steer.

The first power steering system on an automobile was apparently installed in 1876 by a man with the surname of Fitts, but little else is known about him.[1] The next power steering system was put on a Columbia 5-ton truck in 1903 where a separate electric motor was used to assist the driver in turning the front wheels.[1][2]

Robert E. Twyford, a resident of Pittsburgh, Pennsylvania, included a mechanical power steering mechanism as part of his patent (U.S. Patent 646,477) issued on April 3, 1900 for the first four-wheel drive system.[3]

Francis W. Davis, an engineer of the truck division of Pierce-Arrow, began exploring how steering could be made easier, and in 1926 invented and demonstrated the first practical power steering system.[4][5][6] Davis moved to General Motors and refined the hydraulic-assisted power steering system, but the automaker calculated it would be too expensive to produce.[5] Davis then signed up with Bendix, a parts manufacturer for automakers. Military needs during World War II for easier steering on heavy vehicles boosted the need for power assistance on armored cars and tank-recovery vehicles for the British and American armies.[5]

Chrysler Corporation introduced the first commercially available passenger car power steering system on the 1951 Chrysler Imperial under the name "Hydraguide".[7] The Chrysler system was based on some of Davis's expired patents. General Motors introduced the 1952 Cadillac with a power steering system using the work Davis had done for the company almost twenty years earlier.[8]

Charles F. Hammond from Detroit filed several patents for improvements of power steering with the Canadian Intellectual Property Office in 1958.[9][10][11]

Most new vehicles now have power steering, owing to the trends toward front wheel drive, greater vehicle mass, and wider tires, which all increase the required steering effort. Heavier vehicles, as are common in some countries, would be extremely difficult to maneuver at low speeds, while vehicles of lighter weight may not need power assisted steering at all. 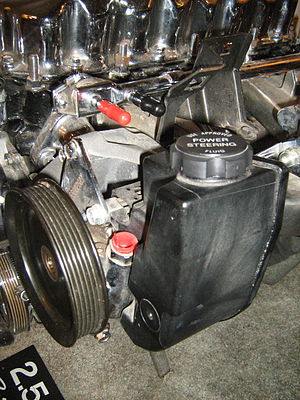 The steering booster is arranged so that should the booster fail, the steering will continue to work (although the wheel will feel heavier). Loss of power steering can significantly affect the handling of a vehicle. Each vehicle owner's manual gives instructions for inspection of fluid levels and regular maintenance of the power steering system.

The working liquid, also called "hydraulic fluid" or "oil", is the medium by which pressure is transmitted. Common working liquids are based on mineral oil.

Some modern systems also include an electronic control valve to reduce the hydraulic supply pressure as the vehicle's speed increases; this is variable-assist power steering.

In this power steering system, the force steering the wheels comes from the car's high pressure hydraulic system and is always the same no matter what the road speed is. Turning the steering wheel moves the wheels simultaneously to a corresponding angle via a hydraulic cylinder. In order to give some artificial steering feel, there is a separate hydraulically operated system that tries to turn the steering wheel back to centre position. The amount of pressure applied is proportional to road speed, so that at low speeds the steering is very light, and at high speeds it is very difficult to move more than a small amount off centre.

It was invented by Citroën of France.

As long as there is pressure in the car's hydraulic system, there is no mechanical connection between the steering wheel and the roadwheels. This system was first introduced in the Citroën SM in 1970, and was known as 'VariPower' in the UK and 'SpeedFeel' in the U.S.

In the late 1960s, General Motors offered a variable-ratio power steering system as an option on Pontiac and other vehicles[citation needed].

Electro-hydraulic power steering systems, sometimes abbreviated EHPS, and also sometimes called "hybrid" systems, use the same hydraulic assist technology as standard systems, but the hydraulic pressure comes from a pump driven by an electric motor instead of a drive belt at the engine.

In 1965, Ford experimented with a fleet of "wrist-twist instant steering" equipped Mercury Park Lanes that replaced the conventional large steering wheel with two 5-inch (127 mm) rings, a fast 15:1 gear ratio, and an electric hydraulic pump in case the engine stalled.[15][16]

In 1988, the Subaru XT6 was fitted with a unique Cybrid adaptive electro-hydraulic steering system that changed the level of assistance based on the vehicle's speed.

In 1990, Toyota introduced its second-generation MR2 with electro-hydraulic power steering. This avoided running hydraulic lines from the engine (which was behind the driver in the MR2) up to the steering rack. In 1994 Volkswagen produced the Mark 3 Golf Ecomatic, with an electric pump. This meant that the power steering would still operate while the engine was stopped by the computer to save fuel.[17] Electro-hydraulic systems can be found in some cars by Ford, Volkswagen, Audi, Peugeot, Citroen, SEAT, Škoda, Suzuki, Opel, MINI, Toyota, Honda, and Mazda.

Electric power assisted steering (EPS/EPAS) or motor-driven power steering (MDPS) uses an electric motor to assist the driver of a vehicle. Sensors detect the position and torque of the steering column, and a computer module applies assistive torque via the motor, which connects to either the steering gear or steering column. This allows varying amounts of assistance to be applied depending on driving conditions. Engineers can therefore tailor steering-gear response to variable-rate and variable-damping suspension systems, optimizing ride, handling, and steering for each vehicle.[18] On Fiat group cars the amount of assistance can be regulated using a button named "CITY" that switches between two different assist curves, while most other EPS systems have variable assist. These give more assistance as the vehicle slows down, and less at faster speeds.

A mechanical linkage between the steering wheel and the steering gear is retained in EPAS. In the event of component failure or power failure that causes a failure to provide assistance, the mechanical linkage serves as a back-up. When EPAS fails, the driver encounters a situation where heavy effort is required to steer. This heavy effort is similar to that of an inoperative hydraulic steering assist system. Depending on the driving situation, driving skill and strength of the driver, steering assist loss may or may not lead to a crash. The difficulty of steering with inoperative power steering is compounded by the choice of steering ratios in assisted steering gears vs. fully manual. NHTSA has assisted car manufacturers, such as Ford, with recalling EPAS systems prone to failure.[19]

Electric systems have an advantage in fuel efficiency because there is no belt-driven hydraulic pump constantly running, whether assistance is required or not, and this is a major reason for their introduction. Another major advantage is the elimination of a belt-driven engine accessory, and several high-pressure hydraulic hoses between the hydraulic pump, mounted on the engine, and the steering gear, mounted on the chassis. This greatly simplifies manufacturing and maintenance. By incorporating electronic stability control electric power steering systems can instantly vary torque assist levels to aid the driver in corrective maneuvers.[20]

The first electric power steering system appeared on the Suzuki Cervo in 1988.[21] The system has been applied by various automobile manufacturers.

This system should not be confused with variable assist power steering, which varies steering assist torque, not steering ratios, nor with systems where the gear ratio is only varied as a function of steering angle. These last are more accurately called non-linear types (e.g. Direct-Steer offered by Mercedes); a plot of steering-wheel position versus axle steering angle is progressively curved (and symmetrical).