From Infogalactic: the planetary knowledge core
(Redirected from Electricity and magnetism)
Jump to: navigation, search 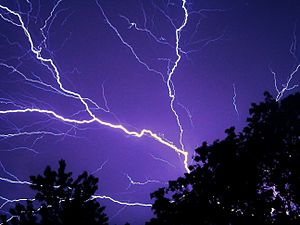 Lightning is an electrostatic discharge that travels between two charged regions.

The word electromagnetism is a compound form of two Greek terms, ἤλεκτρον, ēlektron, "amber", and μαγνῆτις λίθος magnētis lithos, which means "magnesian stone", a type of iron ore. The science of electromagnetic phenomena is defined in terms of the electromagnetic force, sometimes called the Lorentz force, which includes both electricity and magnetism as elements of one phenomenon.

The electromagnetic force plays a major role in determining the internal properties of most objects encountered in daily life. Ordinary matter takes its form as a result of intermolecular forces between individual molecules in matter. Electrons are bound by electromagnetic wave mechanics into orbitals around atomic nuclei to form atoms, which are the building blocks of molecules. This governs the processes involved in chemistry, which arise from interactions between the electrons of neighboring atoms, which are in turn determined by the interaction between electromagnetic force and the momentum of the electrons.

The theoretical implications of electromagnetism, in particular the establishment of the speed of light based on properties of the "medium" of propagation (permeability and permittivity), led to the development of special relativity by Albert Einstein in 1905.

History of the theory

Originally electricity and magnetism were thought of as two separate forces. This view changed, however, with the publication of James Clerk Maxwell's 1873 A Treatise on Electricity and Magnetism in which the interactions of positive and negative charges were shown to be regulated by one force. There are four main effects resulting from these interactions, all of which have been clearly demonstrated by experiments:

While preparing for an evening lecture on 21 April 1820, Hans Christian Ørsted made a surprising observation. As he was setting up his materials, he noticed a compass needle deflected away from magnetic north when the electric current from the battery he was using was switched on and off. This deflection convinced him that magnetic fields radiate from all sides of a wire carrying an electric current, just as light and heat do, and that it confirmed a direct relationship between electricity and magnetism.

At the time of discovery, Ørsted did not suggest any satisfactory explanation of the phenomenon, nor did he try to represent the phenomenon in a mathematical framework. However, three months later he began more intensive investigations. Soon thereafter he published his findings, proving that an electric current produces a magnetic field as it flows through a wire. The CGS unit of magnetic induction (oersted) is named in honor of his contributions to the field of electromagnetism.

His findings resulted in intensive research throughout the scientific community in electrodynamics. They influenced French physicist André-Marie Ampère's developments of a single mathematical form to represent the magnetic forces between current-carrying conductors. Ørsted's discovery also represented a major step toward a unified concept of energy.

This unification, which was observed by Michael Faraday, extended by James Clerk Maxwell, and partially reformulated by Oliver Heaviside and Heinrich Hertz, is one of the key accomplishments of 19th century mathematical physics. It had far-reaching consequences, one of which was the understanding of the nature of light. Unlike what was proposed in Electromagnetism, light and other electromagnetic waves are at the present seen as taking the form of quantized, self-propagating oscillatory electromagnetic field disturbances which have been called photons. Different frequencies of oscillation give rise to the different forms of electromagnetic radiation, from radio waves at the lowest frequencies, to visible light at intermediate frequencies, to gamma rays at the highest frequencies.

Ørsted was not the only person to examine the relationship between electricity and magnetism. In 1802, Gian Domenico Romagnosi, an Italian legal scholar, deflected a magnetic needle using electrostatic charges. Actually, no galvanic current existed in the setup and hence no electromagnetism was present. An account of the discovery was published in 1802 in an Italian newspaper, but it was largely overlooked by the contemporary scientific community.[2]

Representation of the electric field vector of a wave of circularly polarized electromagnetic radiation.

All other forces (e.g., friction) are derived from these four fundamental forces (including momentum which is carried by the movement of particles).

The electromagnetic force is the one responsible for practically all the phenomena one encounters in daily life above the nuclear scale, with the exception of gravity. Roughly speaking, all the forces involved in interactions between atoms can be explained by the electromagnetic force acting on the electrically charged atomic nuclei and electrons inside and around the atoms, together with how these particles carry momentum by their movement. This includes the forces we experience in "pushing" or "pulling" ordinary material objects, which come from the intermolecular forces between the individual molecules in our bodies and those in the objects. It also includes all forms of chemical phenomena.

A necessary part of understanding the intra-atomic to intermolecular forces is the effective force generated by the momentum of the electrons' movement, and that electrons move between interacting atoms, carrying momentum with them. As a collection of electrons becomes more confined, their minimum momentum necessarily increases due to the Pauli exclusion principle. The behaviour of matter at the molecular scale including its density is determined by the balance between the electromagnetic force and the force generated by the exchange of momentum carried by the electrons themselves.

The scientist William Gilbert proposed, in his De Magnete (1600), that electricity and magnetism, while both capable of causing attraction and repulsion of objects, were distinct effects. Mariners had noticed that lightning strikes had the ability to disturb a compass needle, but the link between lightning and electricity was not confirmed until Benjamin Franklin's proposed experiments in 1752. One of the first to discover and publish a link between man-made electric current and magnetism was Romagnosi, who in 1802 noticed that connecting a wire across a voltaic pile deflected a nearby compass needle. However, the effect did not become widely known until 1820, when Ørsted performed a similar experiment.[3] Ørsted's work influenced Ampère to produce a theory of electromagnetism that set the subject on a mathematical foundation.

One of the peculiarities of classical electromagnetism is that it is difficult to reconcile with classical mechanics, but it is compatible with special relativity. According to Maxwell's equations, the speed of light in a vacuum is a universal constant, dependent only on the electrical permittivity and magnetic permeability of free space. This violates Galilean invariance, a long-standing cornerstone of classical mechanics. One way to reconcile the two theories (electromagnetism and classical mechanics) is to assume the existence of a luminiferous aether through which the light propagates. However, subsequent experimental efforts failed to detect the presence of the aether. After important contributions of Hendrik Lorentz and Henri Poincaré, in 1905, Albert Einstein solved the problem with the introduction of special relativity, which replaces classical kinematics with a new theory of kinematics that is compatible with classical electromagnetism. (For more information, see History of special relativity.)

In another paper published in 1905, Albert Einstein undermined the very foundations of classical electromagnetism. In his theory of the photoelectric effect (for which he won the Nobel prize in physics) and inspired by the idea of Max Planck's "quanta", he posited that light could exist in discrete particle-like quantities as well, which later came to be known as photons. Einstein's theory of the photoelectric effect extended the insights that appeared in the solution of the ultraviolet catastrophe presented by Max Planck in 1900. In his work, Planck showed that hot objects emit electromagnetic radiation in discrete packets ("quanta"), which leads to a finite total energy emitted as black body radiation. Both of these results were in direct contradiction with the classical view of light as a continuous wave. Planck's and Einstein's theories were progenitors of quantum mechanics, which, when formulated in 1925, necessitated the invention of a quantum theory of electromagnetism. This theory, completed in the 1940s-1950s, is known as quantum electrodynamics (or "QED"), and, in situations where perturbation theory is applicable, is one of the most accurate theories known to physics.

All electromagnetic phenomena are underpinned by quantum mechanics, specifically by quantum electrodynamics (which includes classical electrodynamics as a limiting case) and this accounts for almost all physical phenomena observable to the unaided human senses, including light and other electromagnetic radiation, all of chemistry, most of mechanics (excepting gravitation), and, of course, magnetism and electricity.

Electromagnetic units are part of a system of electrical units based primarily upon the magnetic properties of electric currents, the fundamental SI unit being the ampere. The units are:

In the electromagnetic cgs system, electric current is a fundamental quantity defined via Ampère's law and takes the permeability as a dimensionless quantity (relative permeability) whose value in a vacuum is unity. As a consequence, the square of the speed of light appears explicitly in some of the equations interrelating quantities in this system.

Formulas for physical laws of electromagnetism (such as Maxwell's equations) need to be adjusted depending on what system of units one uses. This is because there is no one-to-one correspondence between electromagnetic units in SI and those in CGS, as is the case for mechanical units. Furthermore, within CGS, there are several plausible choices of electromagnetic units, leading to different unit "sub-systems", including Gaussian, "ESU", "EMU", and Heaviside–Lorentz. Among these choices, Gaussian units are the most common today, and in fact the phrase "CGS units" is often used to refer specifically to CGS-Gaussian units.