From Infogalactic: the planetary knowledge core
Jump to: navigation, search
For other uses, see Electrode (disambiguation). 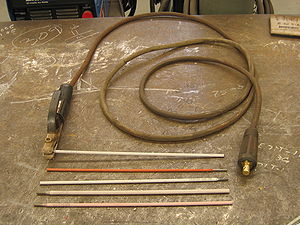 An electrode is an electrical conductor used to make contact with a nonmetallic part of a circuit (e.g. a semiconductor, an electrolyte, a vacuum or air). The word was coined by William Whewell at the request of the scientist Michael Faraday from the Greek words elektron, meaning amber (from which the word electricity is derived), and hodos, a way.[1][2]

Anode and cathode in electrochemical cells

A primary cell is a special type of electrochemical cell in which the reaction cannot be reversed, and the identities of the anode and cathode are therefore fixed. The anode is always the negative electrode. The cell can be discharged but not recharged.

A secondary cell, for example a rechargeable battery, is a cell in which the chemical reactions are reversible. When the cell is being charged, the anode becomes the positive (+) and the cathode the negative (−) electrode. This is also the case in an electrolytic cell. When the cell is being discharged, it behaves like a primary cell, with the anode as the negative and the cathode as the positive electrode.

Other anodes and cathodes

In a three-electrode cell, a counter electrode, also called an auxiliary electrode, is used only to make a connection to the electrolyte so that a current can be applied to the working electrode. The counter electrode is usually made of an inert material, such as a noble metal or graphite, to keep it from dissolving.

For electrical systems which use alternating current the electrodes are the connections from the circuitry to the object to be acted upon by the electric current but are not designated anode or cathode because the direction of flow of the electrons changes periodically, usually many times per second.

Electrodes are used to provide current through nonmetal objects to alter them in numerous ways and to measure conductivity for numerous purposes. Examples include: