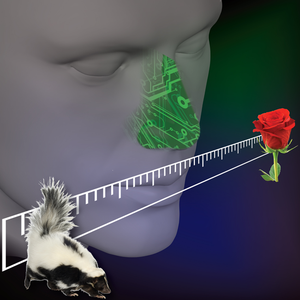 An electronic nose was tuned to the perceptual axis of odorant pleasantness, i.e., an axis ranging from very pleasant (e.g., rose) to very unpleasant (e.g., skunk). This allowed the eNose to then smell novel odorants it never encountered before, yet still generate odor pleasantness estimates in high agreement with human assessments regardless of the subject's cultural background. This suggests an innate component of odorant pleasantness that is tightly linked to molecular structure[1]

An electronic nose is a device intended to detect odors or flavors.

Over the last decade, "electronic sensing" or "e-sensing" technologies have undergone important developments from a technical and commercial point of view. The expression "electronic sensing" refers to the capability of reproducing human senses using sensor arrays and pattern recognition systems. Since 1982,[2] research has been conducted to develop technologies, commonly referred to as electronic noses, that could detect and recognize odors and flavors. The stages of the recognition process are similar to human olfaction and are performed for identification, comparison, quantification and other applications, including data storage and retrieval. However, hedonic evaluation is a specificity of the human nose given that it is related to subjective opinions. These devices have undergone much development and are now used to fulfill industrial needs.

Other techniques to analyze odors

In all industries, odor assessment is usually performed by human sensory analysis, by chemosensors, or by gas chromatography. The latter technique gives information about volatile organic compounds but the correlation between analytical results and actual odor perception is not direct due to potential interactions between several odorous components.

In the Wasp Hound odor detector, the mechanical element is a video camera and the biological element is five parasitic wasps who have been conditioned to swarm in response to the presence of a specific chemical.[3]

Scientist Alexander Graham Bell popularized the notion that it was difficult to measure a smell,[4] and in 1914 said the following:

Did you ever measure a smell? Can you tell whether one smell is just twice strong as another? Can you measure the difference between two kinds of smell and another? It is very obvious that we have very many different kinds of smells, all the way from the odour of violets and roses up to asafetida. But until you can measure their likeness and differences, you can have no science of odour. If you are ambitious to find a new science, measure a smell.

In the decades since Bell made this observation, no such science of odor materialised, and it was not until the 1950s and beyond that any real progress was made.[4]

The electronic nose was developed in order to mimic human olfaction that functions as a non-separative mechanism: i.e. an odor / flavor is perceived as a global fingerprint. Essentially the instrument consists of head space sampling, sensor array, and pattern recognition modules, to generate signal pattern that are used for characterizing odors.

The detection system, which consists of a sensor set, is the "reactive" part of the instrument. When in contact with volatile compounds, the sensors react, which means they experience a change of electrical properties.

Bio-electronic noses use olfactory receptors - proteins cloned from biological organisms, e.g. humans, that bind to specific odor molecules. One group has developed a bio-electronic nose that mimics the signaling systems used by the human nose to perceive odors at a very high sensitivity: femtomolar concentrations.[7]

The more commonly used sensors for electronic noses include

In recent years, other types of electronic noses have been developed that utilize mass spectrometry or ultra-fast gas chromatography as a detection system.[6]

The computing system works to combine the responses of all of the sensors, which represents the input for the data treatment. This part of the instrument performs global fingerprint analysis and provides results and representations that can be easily interpreted. Moreover, the electronic nose results can be correlated to those obtained from other techniques (sensory panel, GC, GC/MS). Many of the data interpretation systems are used for the analysis of results. These systems include artificial neural network (ANN), fuzzy logic, pattern recognition modules, etc.[11]

How to perform an analysis

As a first step, an electronic nose needs to be trained with qualified samples so as to build a database of reference. Then the instrument can recognize new samples by comparing volatile compounds fingerprint to those contained in its database. Thus they can perform qualitative or quantitative analysis. This however may also provide a problem as many odours are made up of multiple different molecules, this may be possibly wrongly interpreted by the device as it will register them as different compounds, resulting in incorrect or inaccurate results depending on the primary function of a nose.[12]

In process and production departments

Possible and future applications in the fields of health and security

Various application notes describe analysis in areas such as flavor and fragrance, food and beverage, packaging, pharmaceutical, cosmetic and perfumes, and chemical companies. More recently they can also address public concerns in terms of olfactive nuisance monitoring with networks of on-field devices.[26][27] Since emission rates on a site can be extremely variable for some sources, the electronic nose can provide a tool to track fluctuations and trends and assess the situation in real time. It improves understanding of critical sources, leading to pro-active odor management. Real time modeling will present the current situation, allowing the operator to understand which periods and conditions are putting the facility at risk. Also, existing commercial systems can be programmed to have active alerts based on set points (odor concentration modeled at receptors/alert points or odor concentration at a nose/source) to initiate appropriate actions. 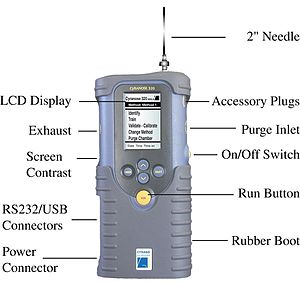 The Cyranose 320 is a handheld “electronic nose” developed by Cyrano Sciences of Pasadena, California in 2000.[28] Cyrano Sciences was founded in 1997, 9 years after the concept of an “electronic nose” based on using multiple semi-selective sensors combined with electronic computation was first proposed by Gardner and Bartlett.[29] The Cyranose 320 is based on sensor research performed by Professor Nathan Lewis of the California Institute of Technology.[30] Applications researched using the Cyranose 320 include the detection of COPD,[31] and other medical conditions[32] as well as industrial applications generally related to quality control or contamination detection.[33]