From Infogalactic: the planetary knowledge core
Jump to: navigation, search
This article is about the technical field of electronics. For personal-use electronic devices, see consumer electronics. For the scientific magazine, see Electronics (magazine). 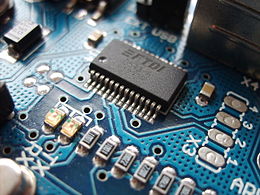 Electronics is the science of how to control electric energy, energy in which the electrons have a fundamental role. Electronics deals with electrical circuits that involve active electrical components such as vacuum tubes, transistors, diodes and integrated circuits, and associated passive electrical components and interconnection technologies. Commonly, electronic devices contain circuitry consisting primarily or exclusively of active semiconductors supplemented with passive elements; such a circuit is described as an electronic circuit.

The nonlinear behaviour of active components and their ability to control electron flows makes amplification of weak signals possible, and electronics is widely used in information processing, telecommunication, and signal processing. The ability of electronic devices to act as switches makes digital information processing possible. Interconnection technologies such as circuit boards, electronics packaging technology, and other varied forms of communication infrastructure complete circuit functionality and transform the mixed components into a regular working system.

Electronics is distinct from electrical and electro-mechanical science and technology, which deal with the generation, distribution, switching, storage, and conversion of electrical energy to and from other energy forms using wires, motors, generators, batteries, switches, relays, transformers, resistors, and other passive components. This distinction started around 1906 with the invention by Lee De Forest of the triode, which made electrical amplification of weak radio signals and audio signals possible with a non-mechanical device. Until 1950 this field was called "radio technology" because its principal application was the design and theory of radio transmitters, receivers, and vacuum tubes.

Today, most electronic devices use semiconductor components to perform electron control. The study of semiconductor devices and related technology is considered a branch of solid-state physics, whereas the design and construction of electronic circuits to solve practical problems come under electronics engineering. This article focuses on engineering aspects of electronics.

Electronics has branches as follows: 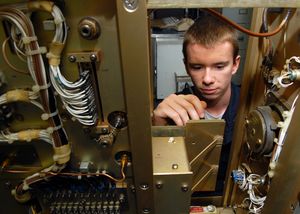 An electronic component is any physical entity in an electronic system used to affect the electrons or their associated fields in a manner consistent with the intended function of the electronic system. Components are generally intended to be connected together, usually by being soldered to a printed circuit board (PCB), to create an electronic circuit with a particular function (for example an amplifier, radio receiver, or oscillator). Components may be packaged singly, or in more complex groups as integrated circuits. Some common electronic components are capacitors, inductors, resistors, diodes, transistors, etc. Components are often categorized as active (e.g. transistors and thyristors) or passive (e.g. resistors, diodes, inductors and capacitors).

Vacuum tubes (Thermionic valves) were one of the earliest electronic components. They were almost solely responsible for the electronics revolution of the first half of the Twentieth Century. They took electronics from parlor tricks and gave us radio, television, phonographs, radar, long distance telephony and much more. They played a leading role in the field of microwave and high power transmission as well as television receivers until the middle of the 1980s.[1] Since that time, solid state devices have all but completely taken over. Vacuum tubes are still used in some specialist applications such as high power RF amplifiers, cathode ray tubes, specialist audio equipment, guitar amplifiers and some microwave devices.

In April 1955 the IBM 608 was the first IBM product to use transistor circuits without any vacuum tubes and is believed to be the world's first all-transistorized calculator to be manufactured for the commercial market.[2][3] The 608 contained more than 3,000 germanium transistors. Thomas J. Watson Jr. ordered all future IBM products to use transistors in their design. From that time on transistors were almost exclusively used for computer logic and peripherals.

Circuits and components can be divided into two groups: analog and digital. A particular device may consist of circuitry that has one or the other or a mix of the two types. 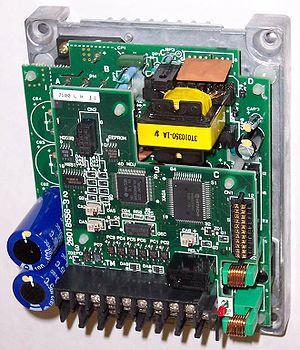 Most analog electronic appliances, such as radio receivers, are constructed from combinations of a few types of basic circuits. Analog circuits use a continuous range of voltage or current as opposed to discrete levels as in digital circuits.

The number of different analog circuits so far devised is huge, especially because a 'circuit' can be defined as anything from a single component, to systems containing thousands of components.

One rarely finds modern circuits that are entirely analog. These days analog circuitry may use digital or even microprocessor techniques to improve performance. This type of circuit is usually called "mixed signal" rather than analog or digital.

Sometimes it may be difficult to differentiate between analog and digital circuits as they have elements of both linear and non-linear operation. An example is the comparator which takes in a continuous range of voltage but only outputs one of two levels as in a digital circuit. Similarly, an overdriven transistor amplifier can take on the characteristics of a controlled switch having essentially two levels of output. In fact, many digital circuits are actually implemented as variations of analog circuits similar to this example—after all, all aspects of the real physical world are essentially analog, so digital effects are only realized by constraining analog behavior.

Digital circuits are electric circuits based on a number of discrete voltage levels. Digital circuits are the most common physical representation of Boolean algebra, and are the basis of all digital computers. To most engineers, the terms "digital circuit", "digital system" and "logic" are interchangeable in the context of digital circuits. Most digital circuits use a binary system with two voltage levels labeled "0" and "1". Often logic "0" will be a lower voltage and referred to as "Low" while logic "1" is referred to as "High". However, some systems use the reverse definition ("0" is "High") or are current based. Quite often the logic designer may reverse these definitions from one circuit to the next as he sees fit to facilitate his design. The definition of the levels as "0" or "1" is arbitrary.

Ternary (with three states) logic has been studied, and some prototype computers made.

Heat generated by electronic circuitry must be dissipated to prevent immediate failure and improve long term reliability. Heat dissipation is mostly achieved by passive conduction/convection. Means to achieve greater dissipation include heat sinks and fans for air cooling, and other forms of computer cooling such as water cooling. These techniques use convection, conduction, and radiation of heat energy.

Electronic noise is defined[4] as unwanted disturbances superposed on a useful signal that tend to obscure its information content. Noise is not the same as signal distortion caused by a circuit. Noise is associated with all electronic circuits. Noise may be electromagnetically or thermally generated, which can be decreased by lowering the operating temperature of the circuit. Other types of noise, such as shot noise cannot be removed as they are due to limitations in physical properties.

Circuit analysis is the study of methods of solving generally linear systems for unknown variables such as the voltage at a certain node or the current through a certain branch of a network. A common analytical tool for this is the SPICE circuit simulator.

Also important to electronics is the study and understanding of electromagnetic field theory.

Due to the complex nature of electronics theory, laboratory experimentation is an important part of the development of electronic devices. These experiments are used to test or verify the engineer’s design and detect errors. Historically, electronics labs have consisted of electronics devices and equipment located in a physical space, although in more recent years the trend has been towards electronics lab simulation software, such as CircuitLogix, Multisim, and PSpice.

Many different methods of connecting components have been used over the years. For instance, early electronics often used point to point wiring with components attached to wooden breadboards to construct circuits. Cordwood construction and wire wrap were other methods used. Most modern day electronics now use printed circuit boards made of materials such as FR4, or the cheaper (and less hard-wearing) Synthetic Resin Bonded Paper (SRBP, also known as Paxoline/Paxolin (trade marks) and FR2) - characterised by its brown colour. Health and environmental concerns associated with electronics assembly have gained increased attention in recent years, especially for products destined to the European Union, with its Restriction of Hazardous Substances Directive (RoHS) and Waste Electrical and Electronic Equipment Directive (WEEE), which went into force in July 2006.

Rasberry crazy ants have been known to consume the insides of electrical wiring, and nest inside of electronics; they prefer DC to AC currents. This behavior is not well understood by scientists.[5]