She was born Lenuța Petrescu into a peasant family in Petrești commune, Dâmbovița County, in the informal region of Wallachia. Her claimed date of birth was later altered from 1916 to 1919 to make her seem younger than her husband.[2] Her family was supported by her father's job as a ploughman. Her records show she left school with a good mark only in needlework in primary school. After primary school, she moved along with her brother to Bucharest, where she worked as a laboratory assistant before getting a job at a textile factory. She joined the Romanian Communist Party in 1937 and met 21-year-old Nicolae Ceaușescu in 1939. Ceaușescu was instantly attracted to her which, reportedly, made him never look at another woman in a romantic manner.[3] Their relationship was interrupted by Ceaușescu's frequent stints in prison, but they finally married on 23 December 1947. 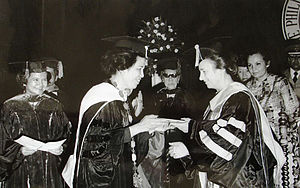 After the Communists took power, Ceaușescu worked as a secretary in the Ministry of Foreign Affairs and was an unimportant figure until her husband became general secretary of the party. Starting in July 1972, Elena Ceaușescu was given various offices at senior levels in the Romanian Communist Party. In June 1973 she became a member of the Politburo of the Romanian Communist Party, becoming the second most important and influential person after Ceauşescu himself. She was deeply involved in party administration alongside her husband, and was one of the few spouses of a Communist Party boss to have a high political profile of her own.

Ceaușescu frequently accompanied her husband on official visits abroad. During a state visit to the People's Republic of China in June 1971, she took note of how Jiang Qing, Chairman Mao Zedong's wife, maintained a position of real power. Most likely inspired by this, she began to engineer her own political rise in Romania. In July 1971, she was elected a member of the Central Commission on Socio-Economic Forecasting, and in July 1972, she became a full member of the Romanian Communist Party Central Committee. In June 1973, after having been nominated by Emil Bodnăraș, she was elected to the party's Executive Committee. In November 1974, at the 11th Party Congress, she was made a member of the (renamed) political executive committee, and in January 1977, she became a member of the highest party body, the Permanent Bureau of the Political Executive Committee. In March 1975, she was elected to the Grand National Assembly, the country's national legislature, holding the seat for Pitești, Arges County, the most important industrial region of the country, until her death in 1989. In March 1980, she was made a First Deputy Prime Minister, a state title she also held until she was executed in the Romanian Revolution.[4] 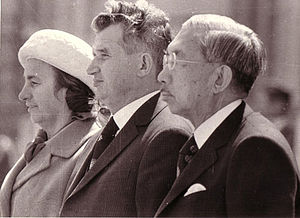 Elena was the object of a personality cult as intense as that of her husband, which exalted her as the "Mother of the Nation." By all accounts, her vanity and desire for honours exceeded that of her husband. As with her husband, Romanian Television was under strict orders to take great care portraying her on screen. For instance, she was never supposed to be shown in profile because of her large nose and overall homely appearance.[3] Publicly, Ceaușescu said that it was an honor to be referred to as "comrade", but Romanian expatriates in the United States frequently referred to her as "Madame Ceaușescu" with great disdain.

Ceaușescu fled with her husband on 22 December 1989, after the events in Timișoara led to the Romanian Revolution, but she and her husband were captured in the town of Targoviste. At the show trial that took place, she answered only a few questions since her husband took a protective role, asked her to calm down and shook his head each time her mouth opened to reply in anger.

On the afternoon of 25 December 1989, (Christmas Day) in Târgoviște they were turned over to a firing squad and executed. Her arms, and those of her husband, were tied behind their backs. Before the sentences were carried out, Elena reacted far more belligerently than her husband, screaming: "You motherfuckers!" while being led up against the wall; at the same time Nicolae Ceaușescu sang "The Internationale".[5] Their actual execution was not filmed in time – the firing squad was in a hurry to carry out the sentence – but the aftermath, including echoes of the final volley, the pall of smoke, and the bodies immediately afterwards, were caught on camera. A still photograph of the couple in the midst of the execution is available.[6] She was 73 years old.[7][8][9][10][11]

She was the only woman ever executed by the modern state of Romania.[12]

Ceaușescu was outlived by her mother, a near centenarian at the time of her death, her brother Gheorghe Petrescu (also an important figure in the party) and her three children: Valentin (b. 1948), Zoia (1949–2006) and Nicu (1951–1996), who was also a very important member of the Romanian Communist Party.

Reputation as a chemical researcher

In 1957 she was a research scientist at ICECHIM (National Institute for Chemical Research). In the early 1960s she was reported to be secretary of the party committee of the Bucharest Central Institute of Chemical Researches, and, when her husband Ceaușescu took over the party leadership in March 1965, she was listed as the institute's director. In December of the same year, she was elected a member of the newly established National Council of Scientific Research, and in September 1966 she was awarded the Order of Scientific Merit First Class.[13]

Despite leaving grammar school at the age of 14, Ceaușescu graduated from the University of Bucharest with a PhD in polymer chemistry and top in a class of 100 women with the honor of summa cum laude. Her thesis has 162 pages, 32 tables, 40 figures and 440 references and describes the invention of a very valuable artificial material.[15] Critics consider it unlikely that a textile worker – especially one whose formal schooling ended at 14 – would have been able to write a thesis in chemistry.[16] After the Revolution of 1989, several scientists have claimed that Elena had forced them to write papers in her name.[3][17] Claims have also arisen that the university gave her the honour of the doctorate solely because of her political position.

Most of the respected academic institutions and universities in the West refused to acknowledge her alleged academic merit.[18] She was made a member of the Illinois Academy of Sciences. Elena Ceaușescu later commented on that by saying that she never heard of Illinois and made an antisemitic remark on the ethnicity of the President of the Academy of Sciences at that time, the chemist Emanuel Merdinger. She allegedly obtained her awards with money, instead of merit.[18]

In March 1974, she was made a member of the Romanian Academy's Section for Chemical Sciences. According to a 1984 report by Radio Free Europe, "It is rumored that, at the time when she wanted to receive her doctorate from the Bucharest Faculty of Chemistry, she met with strong opposition from the great Romanian chemist Costin D. Nenitescu, the dean of the faculty. She was forced instead to present her thesis to Cristofor Simionescu and Ioan Ursu at the University of Iasi, where she met with complete success."[19]

In summary, to quote from an article on plagiarism in the leading scientific journal Nature:

Elena Ceauşescu did not have a BSc, but the power of her husband Nicolae – Romania's dictator until communism fell – still made sure that the University of Bucharest awarded her a PhD in chemistry. The contents of her many scientific papers were penned by others.[20]

She was sometimes nicknamed "Codoi", referring to her alleged mispronunciation of the name of the chemical compound CO2 ("Co" being the C for carbon, O for oxygen, and "doi" being Romanian for "two"). She was mocked by many, including an official who called her by this nickname during her show trial.[21][22][23][24] Contributing to the humorous effect, "codoi" is an actual word in Romanian, meaning "big tail".[25]