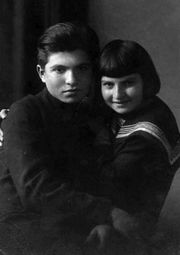 Elizabeth Gilels and her brother, the pianist, Emil.

Born in Odessa, to a Jewish musical family (but neither parent was a professional musician).

Her father was a clerk at a sugar refinery, mother was a housewife having many children. Both parents had children from previous marriages. However, due to inexplicable reasons the meeting of Esfira and Grigory Gilels produced two outstanding musicians into the world: Emil Gilels and three years after a daughter Elizabeth, who became an outstanding violinist.

Elizabeth commenced her violin studies with the eminent pedagogue, Pyotr Stolyarsky whose star pupils include David Oistrakh, Nathan Milstein and Boris Goldstein. Later she studied with Abram Yampolsky (1890–1956) in Moscow. Somehow history has consigned Elizaveta Gilels – ‘Elizabeth Gilels’ in the West - to a dual role, neither of them directly to do with her violin playing: wife of the legendary Leonid Kogan and/or sister of the eminent pianist Emil Gilels.

"In Odessa, in spite of the hard times, the public enjoyed music very much. All attention was given to musically gifted children. In a modest Gilels’s flat in a poor and famous district of Odessa called Moldavanka there was a grand piano and already at the age of two little Emil showed interest in it touching keys and listening to them. He was also interested in other sounds: performance of brass bands, singing, tolling of bells."[1] Little Yelizaveta, consequently was surrounded by music at an early age.

Early on in her career, she’d formed a youthful duo with her brother before taking a prize at the Ysaÿe competition in Brussels in 1937.

During that year, as the world watched in anticipation one of the most prestigious international competitions of its time, the International Ysaÿe Competition, Stoliarsky students caused a sensation. Top prizes were garnered by David Oistrakh, Boris Goldshtein (Goldstein), Yelizaveta (Elizabeth) Gilels and Mikhail Fikhtengoltz. The Soviet Politburo was indeed riding the propaganda machine to its fullest.

"The results of the sessions created a profound impression: the Soviet school, with an assurance that bordered on arrogance, carried off all the prizes from the first down. The latter was awarded without the slightest discussion to the great David Oistrakh. Everyone else had to be content with crumbs; the Belgian violin school, though still a source of pride, failed, and its absence at the final was much commented on; Arthur Grumiaux and Carlo Van Neste, both young and inexperienced, were not able to convince the jury."[2]

It wasn’t until after the War that she formed her duo with Leonid Kogan – their Bach Double Concerto was famous – and they managed to find and perform some more out-of-the-way pieces, as well as works dedicated to them such as the Weinberg sonata.

From 1966 onwards, she taught at Moscow Conservatory (earned title of professor in 1987).

She was a consummate artist and had a great influence on her students. Elizabeth Gilels has written a Four Octave scale & double stops studies for violin.

She died on 13 March 2008, at age of 88 in Moscow, Russia. She is survived by her children Pavel Kogan, Nina Kogan. Grandchildren Dmitry Kogan, Victoria Korchinskaya-Kogan & Daniel Milkis.

Pavel Kogan- son of celebrated[3][4]Russian artists Leonid Kogan and Elisaveta Gilels, began his musical studies at Moscow's Central Music School and continued at the Moscow Conservatory, where he studied violin with the renowned[5][6] pedagogue Yuri Yankelevich. In 1970, at the age of eighteen, he won First Prize and the Gold Medal at the Sibelius International Violin Competition in Helsinki.[7] Before turning his full attention to the conductor's podium, he toured throughout Europe, Japan and the United States as a recitalist and guest violin soloist with many leading orchestras, including the Philadelphia Orchestra and the Los Angeles Philharmonic. He is currently Music Director and Chief Conductor of the Moscow State Symphony Orchestra.[8]

Nina Kogan - daughter of two legendary violinists, Leonid Kogan and Elisaveta Gilels. She started studying the piano at the age of six, then attended the Central Music School for Gifted Children. Later she graduated from the Moscow Conservatory, receiving a D.M.A. with honors in the class of professor Flier. Nina Kogan is a top prize winner of the M.Long Piano Competition in Paris. She began concertizing at the age of 12. At 13 she started performing with her father, Leonid Kogan. Theirs grew into a unique[10][11][12] collaboration that lasted almost 16 years until his death in 1982. During these years she was the only pianist he ever performed with. Nina Kogan performs a vast variety of chamber music and gives master classes all over the world. She has recorded for Deutsche Grammophon, EMISony, Philips, Le Chant du Monde etc.[13] [14]

She has two children, daughter is a prizewinning pianist, Victoria Korchinskaya-Kogan and Daniel Milkis is an aspiring concert violinist.[15]