The Elizabethan Religious Settlement, which was made during the reign of Elizabeth I, was a response to the religious divisions in England during the reigns of Henry VIII, Edward VI and Mary I. This response, described as "The Revolution of 1559",[1] was set out in two Acts of the Parliament of England. The Act of Supremacy of 1558 re-established the Church of England's independence from Rome, with Parliament conferring on Elizabeth the title Supreme Governor of the Church of England, while the Act of Uniformity of 1559 outlined what form the English Church should take, including the re-establishment of the Book of Common Prayer. As for the governance of the Church, all but one of the Marian bishops refused to consecrate a new Archbishop of Canterbury (Canon Law from the 4th century required a minimum of three for consecration). Intent upon maintaining the three-fold ministry of deacon, priest and bishop in the Apostolic Succession, Mathew Parker, a Cambridge University don (lecturer), priest and former vice-Chancellor of the University, was consecrated in December 1559 by four bishops. Two had been ordained using the 1550 Ordinal and two in the mid-1530s using the Roman Pontifical. All four had been consecrated by men in Roman Catholic Orders. The Church might be 'reformed' in theology but there would be no break with the ancient institutional Church in governance.

When Mary died in 1558, Elizabeth succeeded to the throne. One of the most important concerns during Elizabeth's early reign was the question of which form the state religion would take. Communion with the Roman Catholic Church had been reinstated under Mary using the instrument of Royal Supremacy. Elizabeth relied primarily on her chief advisors, Sir William Cecil, as her Secretary of State, and Sir Nicholas Bacon, as Lord Keeper of the Great Seal, for direction on the matter. Many historians believe that William Cecil himself wrote the Church Settlement because it was simply the 1551–1552 version watered down.

Parliament was summoned in 1559 to consider a Reformation Bill and to recreate an independent Church of England. The drafted Reformation Bill defined Holy Communion in terms of Reformed Protestant theology, as opposed to the transubstantiation of the Roman Catholic mass, included abuse of the Pope in the litany,[2][3] and ordered that ministers should not wear the surplice or other Roman Catholic vestments. It allowed priests to marry, banned images from churches, and confirmed Elizabeth as Supreme Governor of the Church of England. The Bill met heavy resistance in the House of Lords, as Roman Catholic bishops and lay peers opposed and voted against it. They reworked much of the Bill, changed the proposed liturgy to allow for belief in the Real Presence of Christ in the Holy Communion, made allowance for the wearing of liturgical vestments, the celebration of the Communion in the customary place (altar or table against the east wall), and refused to grant Elizabeth the title of Supreme Head of the Church. Parliament was prorogued over Easter, and when it resumed, the government entered two new bills into the Houses—the Act of Supremacy and the Act of Uniformity. The Black Rubric of 1552 was repealed. It commanded kneeling to receive communion out of reverence and not to imply the "real and essential" presence. Henceforth kneeling was customary and Real Presence implied without defining it with a doctrine such as transubstantiation. In 1662 the Rubric was restored but the words were changed to "corporal" to exclude the meaning that Christ was present in his natural flesh and blood.

The Papal bull Regnans in Excelsis, issued on 25 February 1570 by Pope Pius V, declared "Elizabeth, the pretended Queen of England and the servant of crime" to be a heretic, released all of her subjects from any allegiance to her, and excommunicated any who obeyed her orders. The bull, written in Latin, is named from its incipit, the first three words of its text, which mean "ruling from on high" (a reference to God). Among the queen's alleged offences, it lists that "she has removed the royal Council, composed of the nobility of England, and has filled it with obscure men, being heretics."

Under Elizabeth, factionalism in the Council and conflicts at court greatly diminished. The Act of Supremacy 1558 revived ten Acts of Henry VIII that Mary had repealed and confirmed Elizabeth as Supreme Governor of the Church of England, and passed without difficulty. Use of the term "Supreme Governor" instead of "Supreme Head" pacified many who were concerned about a female leader of the Church. Elizabeth's changes were more wholesale than those of her half-brother, Edward VI[citation needed]. All but one of the bishops, (the octogenarian Anthony Kitchin of Llandaff) lost their posts,[4] and a hundred fellows of Oxford colleges were deprived. Many dignitaries resigned rather than take the oath, and the bishops who were removed from the ecclesiastical bench were replaced by appointees who agreed to the reforms.

On the question of images, Elizabeth's initial reaction was to allow crucifixes and candlesticks and the restoration of roods, but some of the new bishops whom she had elevated protested. In 1560 Edmund Grindal, one of the Marian exiles now made Bishop of London, was allowed to enforce the demolition of rood lofts in London, and in 1561 the Queen herself ordered the demolition of all lofts, although she sometimes displayed a cross and candlesticks in her own chapel.[5] Thereafter, the determination to prevent any further restoration of "popery" was evidenced by the more thoroughgoing destruction of roods, vestments, stone altars, dooms, statues and other ornaments. The queen also appointed a new Privy Council, removing many Roman Catholic counsellors by doing so. Amidst all the politics and danger (her accession was not wildly popular) it is not so easy to parse out what she wanted initially: an unmarried clergy; the real presence of Christ in the Eucharist without a theory of definition; mass vestments; a holy table against the wall with candlesticks, a fair linen and candlesticks, "The Prayer Book communion would not be a mass, but at least it would look like a mass," Haight, ibid. p. 241. Except for the real presence she didn't succeed. 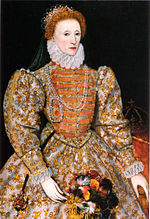 Queen Elizabeth I of England reached a moderate religious settlement which became controversial after her death.

The Act of Uniformity 1558, which demanded the population to attend Sunday service in the parishes of the Church of England, at which a new version of the Book of Common Prayer was to be used, passed by only three votes.[6] The Bill of Uniformity was more cautious than the initial Reformation Bill. It revoked the harsh laws proposed against Roman Catholics, it removed the abuse of the Pope from the litany and kept the wording that allowed for both a subjective and objective belief in the Real Presence in the Communion.

After Parliament was dismissed, Elizabeth, along with Cecil, drafted what are known as the Royal Injunctions, 1559. These were additions to the settlement and largely stressed some continuity with the Catholic past: bishops and priests were ordered to wear the surplice; wafers, as opposed to ordinary baker's bread, could be used as the bread at Communion. There had been opposition to the settlement in the shires, which for the most part were largely Roman Catholic, so the changes are often said to have been made in order to allow for acceptance of the Settlement, although MacCulloch sees it as "absurd to see these concessions as intended to mollify Catholic-minded clergy and laity" and only of help in conciliating possible Lutherans. Catholics had lost so much that these minor changes meant nothing to them.[7] What succeeded more than anything else was the sheer length of Elizabeth's reign; while Mary had been able to impose her programme for a mere five years, Elizabeth had more than forty. Those who delayed, "looking for a new day" when restoration would again be commanded, were defeated by the passing of years.[8]

The settlement is often seen as a terminal point of the English Reformation and in the long run the foundation of a "via media" and the concept of Anglicanism central to which was the refusal to adopt any one theology as official as this would lead to over-defining. The base line was conformity to the teachings of the Church Fathers and Catholic bishops as stated in the Injunctions of 1571, i.e. the first five centuries of the Church. The emerging Anglicanism as outlined by Richard Hooker would be characterized by a belief in reason, an "esteem for continuity over the Reformation divide, and a hospitality towards sacramental modes of thought." At the time it was believed to have established a Protestant church.[9] Although Elizabeth "cannot be credited with a prophetic latitudinarian policy which foresaw the rich diversity of Anglicanism", her preferences made it possible.[10] To some it can be said to represent a compromise in wording and practice between the first Book of Common Prayer of Edward VI (1549) and the Second Prayer Book (1552). For example, when Thomas Cranmer wrote the 1549 Prayer Book, it contained the words "The Body of our Lord Jesus Christ which was given for thee, preserve thy body and soul unto everlasting life." The 1552 edition, which was never implemented, replaces these words with "Take and eat this in remembrance that Christ died for thee, and feed on him in thy heart by faith, with thanksgiving." The 1559 Prayer Book combines the two. However, some liturgical scholars such as Gregory Dix, Ratcliff, and Couratin would say that both prayer books taught the same eucharistic doctrine, albeit more cautiously in the first book.[nb 1] The Act which authorised the second book spoke of it as explaining and making "fully perfect" the first book.[11] Finally, the 1559 book, published under Matthew Parker during the reign of Elizabeth, includes both phrases.[12]

J. E. Neale's "Puritan Choir" thesis claimed that a small bloc of radical Protestant representatives struggled for a more aggressive reform, and had a major influence on Elizabethan politics. This theory has been challenged, however, by Christopher Haigh and others. The prevailing view amongst historians today is that Elizabeth was compelled to accept a more Catholic settlement than she wanted by the Lords, rather than having Puritan reforms forced on her by Marian exiles.

By the time of Elizabeth's death, there had emerged a new party, "perfectly hostile" to Puritans, but not adherent to Rome. The Anglicans, as they came to be called later in the century,[13] preferred the revised Book of Common Prayer of 1559, from which had been removed some of the matters offensive to Catholics.[14] A new dispute was between the Puritans, who wished to see an end of the prayer book and episcopacy and the Anglicans, the considerable body of people who looked kindly on the Elizabethan Settlement, who rejected "prophesyings", whose spirituality had been nourished by the Prayer Book and who preferred the governance of bishops.[15] It was between these two groups that, after Elizabeth's death in 1603, a new, more savage episode of the English Reformation was in the process of gestation.

Road to the Civil War

During the reigns of the first two Stuart kings of England, James I and Charles I, the battle lines were to become more defined, leading ultimately to the English Civil War, the first on English soil to engulf parts of the civilian population. The war was only partly about religion, but the abolition of prayer book and episcopacy by a Puritan Parliament was an element in the causes of the conflict. As Diarmaid MacCulloch has noted, the legacy of these tumultuous events can be recognised, throughout the Commonwealth (1649–1660) and the Restoration which followed it and beyond. Anglicans were to become the core of the restored Church of England, but at the price of further division. At the Restoration in 1660 Anglicans were to be but part of the religious scene.