Ellis County is a county located on the western border of the U.S. state of Oklahoma. As of the 2010 census, the population was 4,151,[1] making it the fifth-least populous county in Oklahoma. Its county seat is Arnett.[2]

The county was named for Albert H. Ellis, vice president of the 1906 Constitutional Convention.[3]

This area was used by indigenous tribes that included the Comanche, Kiowa, Apache, Cheyenne, and Arapaho. In 1820, an expedition led by Stephen Long passed through the area while exploring the Canadian River all the way to Fort Smith, Arkansas. Conflicts broke out between the native Americans and the white settlers that were rapidly moving into Texas. In May 1858, the governor of Texas sent a force of Texas Rangers, militia and allied Indians (notably the Tonkawas), led by Captain John S. "Rip" Ford into Indian Territory. Ford's command fought a battle known as either the Battle of Little Robe Creek or the Battle of Antelope Hills inside the present Ellis County. The battle was notable because it resulted in killing the Comanche chief, Iron Jacket, father of Peta Nocona and grandfather of Quanah Parker.[3]

After the Civil War, roads and railroads turned the Ellis County area into a transportation corridor. A military road connected Fort Supply with Fort Elliott. During the 1880s, the Western Trail, a cattle trail between Texas and Kansas, intersected the military road near the present town of Fargo. The Southern Kansas Railway, later owned by the Atchison, Topeka and Santa Fe Railway, built a line in 1886-7 from Kiowa, Kansas that resulted in starting three Ellis County towns: Fargo, Gage, and Shattuck.[3]

When Oklahoma Territory was created, the present Ellis County became part of Day County. After statehood, several county boundaries changed and resulted in the elimination of Day County. The northern part became Roger Mills County, while the southwestern part of Woodward County was added to the remainder of Day County to become Ellis County. An election for location of the county seat in June 1908, resulted in a runoff between the towns of Shattuck and Arnett. The latter won the runoff election and remains the county seat.[3]

On April 9, 1947, an F5 tornado, the sixth-most-deadly ever recorded in the United States, tore through Ellis County. It began near White Deer, Texas and traveled northeast for 221 miles (356 km). The damage occurred mostly in rural areas, and the towns were largely spared. The storm killed six people in Ellis county itself.[3] 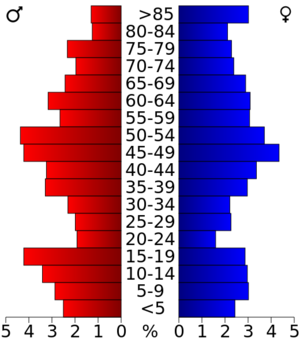 Age pyramid for Ellis County, Oklahoma, based on census 2000 data.

From the time of its founding, the economy of Ellis County has been based on farming and ranching. The most important crops have been wheat, cotton and broomcorn. In 1907, the town of Shattuck shipped more broomcorn than any other shipping point in the nation. Cattle raising had become important right after the Civil War. A major player locally was the Dominion Cattle Company, part of the Cherokee Strip Livestock Association. Although grazing leases ended with the land run, ranching and cattle feeding remained important. In the 1970s, dairying proved profitable.[3]