From Infogalactic: the planetary knowledge core
Jump to: navigation, search
For other uses, see Embryo (disambiguation).

An embryo is a multicellular diploid eukaryote in its earliest stage of development, from the time of fertilization through sexual reproduction until birth, hatching, or germination.

In humans, an embryo is generally considered to be between the first and the eighth week of development after fertilization,[1] and from then it is instead called a fetus. Some definitions consider embryological life to start at the third week of development to the eighth, when most organ systems are developing.[2]

The development of the embryo is called embryogenesis. In organisms that reproduce sexually, once a sperm fertilizes an egg cell, the result is a cell called the zygote, which possesses half the DNA of each of its two parents. In plants, animals, and some protists, the zygote will begin to divide by mitosis to produce a multicellular organism. The result of this process is an embryo.

First attested in English in the mid-14c., the word embryon derives from Medieval Latin embryo, itself from Greek ἔμβρυον (embruon), lit. "young one",[3] which is the neuter of ἔμβρυος (embruos), lit. "growing in",[4] from ἐν (en), "in"[5] and βρύω (bruō), "swell, be full";[6] the proper Latinized form of the Greek term would be embryum. 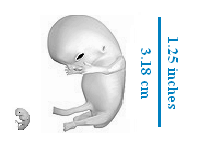 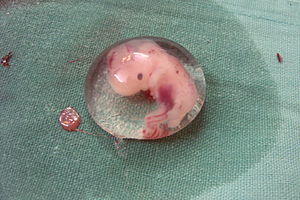 In this stage of human development, the human is highly undeveloped. Below is the process of how an embryo transforms.

Week 1–3
5–7 days after fertilization, the blastocyst attaches to the wall of the uterus (endometrium). When it comes into contact with the endometrium it performs implantation. Implantation connections between the mother and the embryo will begin to form, including the umbilical cord. The embryo's growth centers around an axis, which will become the spine and spinal cord. The brain, spinal cord, heart, and gastrointestinal tract begin to form.[7]

Week 4–5
Chemicals produced by the embryo stop the mother's menstrual cycle. Neurogenesis is underway, showing brain activity at about the 6th week.[8] The heart will begin to beat around the same time. Limb buds appear where arms and legs will grow later. Organogenesis begins. The head represents about one half of the embryo's axial length, and more than half of the embryo's mass. The brain develops into five areas. Tissue formation occurs that develops into the vertebra and some other bones. The heart starts to beat and blood starts to flow.[7]

Week 6–8
Myogenesis and neurogenesis have progressed to where the embryo is capable of motion, and the eyes begin to form. Organogenesis and growth continue. Hair has started to form along with all essential organs. Facial features are beginning to develop. Heartbeat can be detected by ultrasound.[9] At the end of the 8th week, the embryonic stage is over, and the fetal stage begins.[7] 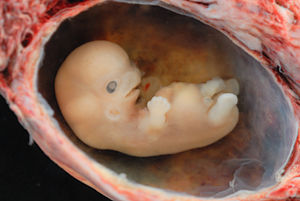 A complete spontaneous abortion at about 6 weeks from conception, i.e. 8 weeks from LMP

Some embryos do not survive through to the fetal stage, which begins about two months after fertilization (10 weeks LMP). Embryos may be aborted spontaneously or purposely.

Studies using very sensitive early pregnancy tests have found that 25% of embryos are aborted by the sixth week LMP (since the woman's last menstrual period), even if a woman does not realize it.[10][11] Abortions after the sixth week LMP happen in 8% of pregnancies.[11] The risk of them is "virtually complete by the end of the embryonic period," with a rate of only two percent after 8.5 weeks LMP.[12]

The most common natural cause of abortion of an embryo is chromosomal abnormality,[13] which accounts for at least 50% of sampled early pregnancy losses.[14] Advancing maternal age and a patient history of previous spontaneous abortions are the two leading risk factors.[14]

Induced (i.e. purposeful) abortion of an embryo may be accomplished by a variety of methods, including both pharmaceutical and surgical techniques. Vacuum aspiration is the most common surgical method of aborting an embryo within the United States.[16]

Common reasons for purposely aborting an embryo include a desire to delay or end childbearing, concern over the interruption of work or education, issues of financial or relationship stability, perceived immaturity and health concerns.[17][18]

Embryos are used in various techniques of assisted reproductive technology, such as in vitro fertilization (IVF) and embryo donation. They may be subject to embryo cryopreservation for later use if IVF procedures have resulted in more embryos than is currently needed. Some aspects, e.g. selective reduction, are issues in the beginning of pregnancy controversy.

As of 1999, current medical technology does not allow an embryo to survive outside the uterus under any circumstances, or to be transplanted from the uterus of one woman to that of another.[19] A human embryo is therefore not considered viable.

Human embryos are being researched to determine their use in treating diseases. Their use in stem cell research, reproductive cloning, and germline engineering are currently being explored. The morality of this type of research is debated because an embryo is often used.[20][21][22]

Embryonic development of salamander, circa the 1920s. 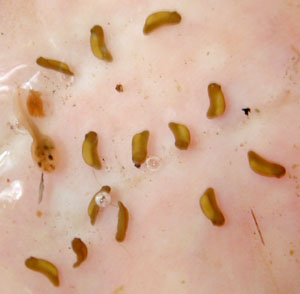 Embryos (and one tadpole) of the wrinkled frog (Rana rugosa)

In animals, the development of the zygote into an embryo proceeds through specific recognizable stages of blastula, gastrula, and organogenesis. The blastula stage typically features a fluid-filled cavity, the blastocoel, surrounded by a sphere or sheet of cells, also called blastomeres. The embryo of a placental mammal is defined as the organism between the first division of the zygote (a fertilized ovum) until it becomes a fetus. An ovum is fertilized in a fallopian tube through which it travels into the uterus. An embryo is called a fetus at a more advanced stage of development and up until birth or hatching. In humans, this is from the eighth week of gestation. However, animals which develop in eggs outside the mother's body, are usually referred to as embryos throughout development; e.g. one would refer to a chick embryo, not a "chick fetus," even at later stages.

During gastrulation the cells of the blastula undergo coordinated processes of cell division, invasion, and/or migration to form two (diploblastic) or three (triploblastic) tissue layers. In triploblastic organisms, the three germ layers are called endoderm, ectoderm, and mesoderm. The position and arrangement of the germ layers are highly species-specific, however, depending on the type of embryo produced. In vertebrates, a special population of embryonic cells called the neural crest has been proposed as a "fourth germ layer", and is thought to have been an important novelty in the evolution of head structures.

During organogenesis, molecular and cellular interactions between germ layers, combined with the cells' developmental potential, or competence to respond, prompt the further differentiation of organ-specific cell types.[citation needed] For example, in neurogenesis, a subpopulation of ectoderm cells is set aside to become the brain, spinal cord, and peripheral nerves. Modern developmental biology is extensively probing the molecular basis for every type of organogenesis, including angiogenesis (formation of new blood vessels from pre-existing ones), chondrogenesis (cartilage), myogenesis (muscle), osteogenesis (bone), and many others.

Generally, if a structure pre-dates another structure in evolutionary terms, then it often appears earlier than the second in an embryo; this general observation is sometimes summarized by the phrase "ontogeny recapitulates phylogeny".[23] For example, the backbone is a common structure among all vertebrates such as fish, reptiles, and mammals, and the backbone also appears as one of the earliest structures laid out in all vertebrate embryos. The cerebrum in humans, which is the most sophisticated part of the brain, develops last. This sequencing rule is not absolute, but it is recognized as being partly applicable to development of the human embryo.

Fossilized animal embryos are known from the Precambrian, and are found in great numbers during the Cambrian period. Even fossilized dinosaur embryos have been discovered.[24] 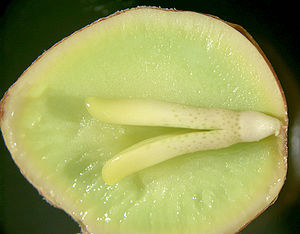 The inside of a Ginkgo seed, showing the embryo

In botany, a seed plant embryo is part of a seed, consisting of precursor tissues for the leaves, stem (see hypocotyl), and root (see radicle), as well as one or more cotyledons. Once the embryo begins to germinate — grow out from the seed — it is called a seedling (plantlet). Bryophytes and ferns are among plants that produce an embryo, but do not produce seeds. In these plants, the embryo is a young plant that grows attached to a parental gametophyte.