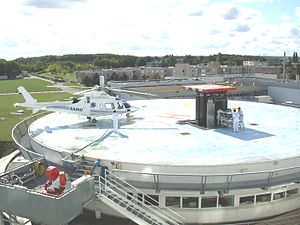 A typical French SAMU hospital with helicoptered MICU on the roof and a ground MICU on the basement in Dreux, France.

Emergency medical services in France and Luxembourg are provided by a mix of organizations under public health control, with the lead taken by a central control function called SAMU, which stands for Service d'Aide Médicale Urgente or Urgent Medical Aid Service. This central hub is supported by resources including first response vehicles or ambulances provided by the fire service or private ambulance services with or without a physician-led car provision from SMUR (Service Mobile d'Urgence et Reanimation – literally translated as Mobile Emergency and Resuscitation Service) which are "mobile intensive care units" (MICU) that have one or more physicians on board.[1]

A law in 1986 defined SAMU missions as hospital-based services providing permanent phone support, choosing and dispatching the proper response for a phone call request. The central component of SAMU is the dispatch centre where a medical regulation team of physicians and assistants has the task of:

Because of aggressive triage (called medical regulation), only about 65% of requests to SAMU actually receive an ambulance response.[2] Current performance on emergency calls is arrival at scene within 10 minutes for 80% of responses, and within 15 minutes for 95% of responses.[3]

This means that SAMU controls a variety of resources within a community from general practitioners to hospital intensive care services.

SAMU is organized at the 'Département' level, with each Département organizing its own service, each of which is identified with its département's unique two-digit number code, for instance SAMU 06 in Nice and SAMU 75 in Paris.[4]

In addition to the mainland French Departments, SAMU also operates in most of the offshore North and South American Départements, such as Guadeloupe (SAMU 971), Martinique, Guyane or Pacific and Indian French Islands (Tahiti Reunion).

In the French system, the word "ambulance" itself is reserved to transportation of one individual on a stretcher on medical prescription, including oral prescription in case of emergency, and the term is generally used to apply to those response vehicles operated by the local SAMU, as well as the emergency vehicles from places such as the fire service or private companies, which are both fully equipped emergency patient transport vehicles. The "reds" (fire service) operate ambulances with 3 or 4 staff members on board, the "whites" (private companies and hospitals) with 2 or 3 staff members on board. Both teams, "reds" and "whites," have basically the same first aid-based medical training; the "reds," as they handle road accidents as well, are also trained in taking care of heavily wounded persons, extraction of wounded out of wrecks, etc. 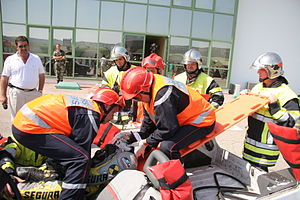 French fire service performing a vehicle extrication during a demonstration in 2007.

Consequently, under the SAMU system in France, there are a number of different providers of emergency medical services, offering different levels of care, and dispatched for different types of condition.

While all of the above types of vehicles attempt to meet some aspects of the European standard for ambulances CEN 1789, published by the European Committee for Standards,[5] the degree of compliance varies, particularly among those vehicles not officially referred to as ambulances in France. The visual identity provisions of the CEN 1789 standard are not currently being followed by the private companies, their vehicles still are white. The fire service vehicles are more and more (2010) equipped with yellow markers. 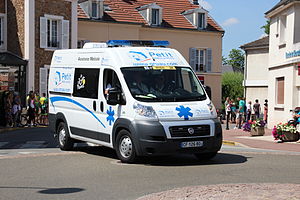 Non-emergency and low-priority ambulance services are normally provided by private companies. For other types of medical transportation, the term "ambulance" is not used; relying instead on the more general term "light vehicle adapted to patient transport."

Private ambulance services also participate (as first responder) to the Urgent Medical Aid Service but they are not a substitute for advanced medical care only rendered by doctors. 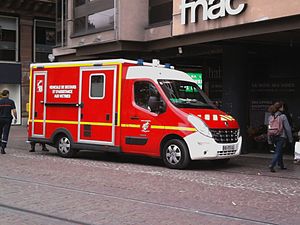 Emergency response may be through the use of a fire department based rescue ambulance, a multi-purpose vehicle or even a fire apparatus.[6] Here, the cross-trained firefighters will provide on scene care and transport for injuries or illness, but are usually backed up by a SMUR unit for more serious issues.

Although they also transport casualties and are, in any practical sense, ambulances, their vehicles are called véhicule de secours et d'assistance aux victimes or VSAV (Rescue vehicle and victims assistance) ;[7] véhicule de secours et d'assistance aux victimes (casualties' rescue and assistance vehicle), or VPS; véhicules de premiers secours (first aid or Rescue vehicles) in case of volunteers from associations. The VSAV and VPS are considered to be means of bringing rescue workers and equipment onsite, with the evacuation of patients being only the logical result of the response, but not the primary duty of these response resources. 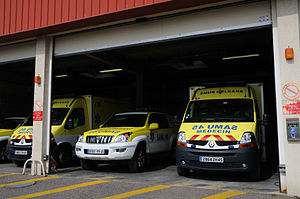 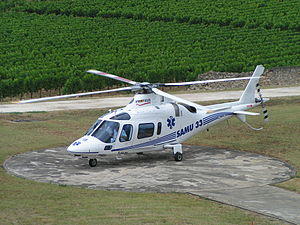 The French philosophy on emergency medical care is to provide a higher level of care at the scene of the incident, and so SMUR (Service Mobile d'Urgence et Reanimation[8]) units are staffed by a qualified physician along with a nurse and/or emergency medical technician. This contrasts with systems in other parts of the world, notably the Anglo-Saxon countries (United Kingdom, United States, Australia etc.) where care on scene is conducted primarily by paramedics or emergency medical technicians, with physicians only becoming involved on scene at the most complex or large scale incidents.

The result is that a SMUR unit will typically spend a long time on scene compared with a paramedic ambulance in a different system, as the physician may conduct a full set of observations, examinations and interventions before removal to hospital. This feature is often contrasted the British or American system, especially in high profile incidents, such as the death of Diana, Princess of Wales in Paris, where the nearly 2 hour delay before arrival at hospital has been ascribed by some as a major contributory factor in her death.[9][10]

SMUR units are hospital based and although the vehicles are typically labelled "SAMU", that term actually refers to the overall integrated service which controls multiple SMUR units (perhaps even from multiple hospitals) and all emergency care resources within a community from GP to Hospital Intensive Care services.

Despite being hospital based, a SMUR unit may choose to transport a patient to an alternative hospital, where the best definitive care may be provided, and are not necessarily tied to the hospital of origin.

French hospitals (whether publicly or privately run) must operate an emergency department (service spécialisé d'accueil et de traitement des urgences) only if it is capable of treating the common trauma and illness conditions that are likely to present. This normally includes a resuscitation unit, general and internal medicine, cardio-vascular medicine, pediatrics, anesthesiology-resuscitation, orthopedic surgery and oncology, including obstetrics. The exception would be for specialised units, which only admit specific pathologies or specific types of patients (e.g. pediatrics). These units are termed "pôle spécialisé d'accueil et de traitement des urgences".

The hospital must have two operating rooms (and a recovery room) with personnel on duty that allow operation at any time, as well as support services that can perform additional examination or analysis at any time, such as medical imaging (radiography, medical ultrasonography, CAT Scanners, haematology, toxicology laboratory etc.

The service is organized in three zones:

Most services also have a massive crowd room that are designed to allow care of a large number of patients, outside of the normal levels of presenting patients. These "plan blanc" units are designed to cope with major incidents or epidemics.

SAMU is the regional Medical Emergency Response Center (MERC) [11] in day to day monitoring and "regulation" of all Hospitals and Ambulances Emergency care Resources in its area and is connected with limitroph SAMU. In case of disaster the French SAMU national network of a national Integrated Emergency Medical System (IEMS) is in charge of the first emergency phase medico sanitary planned response called "Plans blancs" and of secondary ground or aerial transports if necessary.

In hospital emergency medicine has only recently been recognized as a medical specialty in France,[12][13] and pre-hospital care is currently struggling to be recognized as a sub-specialty. In the meantime, many SMUR/MICU physicians are actually in training for other specialties, such as anesthesia, and the system relies on General Practitioners and physicians from other specialties 'filling the gap' when emergency physicians are not available.[2]

The situation is further complicated by the fact that the physicians staffing the SMUR units are among the lowest-paid in Europe. Although salaries have recently improved somewhat, in 2002 it was reported that these physicians who are, for the most part, full-time employees of public hospitals, had a starting salary of only €1300 (£833; $1278) per month.[14] This economic reality has resulted in understandably high turnover and some difficulty in staffing positions. It has been suggested, however, that the recognition of emergency medicine as an in-hospital specialty in France and elsewhere in Europe is likely to result in the evolution of that system towards more comprehensive in-hospital emergency services.

This will ultimately, in turn, result in less physician response; although the complete replacement of physician response by the type of technician response occurring elsewhere is unlikely to occur any time in the immediate future . Since 1986, fire department-based rescue ambulances have had the option of providing resuscitation service (reanimation) using specially-trained nurses,[15] operating on protocols, in the role that we would normally expect to be performed by the paramedic but with the SAMU Medical Physician Regulator Aid[clarification needed]. In actual practise, however, such units[16] and Nurse staffed MICU are used for certain purposes of Stable Intensive Care Patients.

France, along with the rest of the continental European Union uses the emergency telephone number available across all members 112, which gives access to police, fire and ambulance services. However, the legacy emergency number of "15" for SAMU and "18" for fire department VSAV are still in use.

The use of SAMU is free, but abuse is punishable by law.

In France, the 100 or so SAMUs (one for each Département) are all operated by public hospitals. Public hospitals (unlike private hospitals, and France has both) receive government funding. France operates on a system of universal health care.[17] Patients have freedom to choose physicians, hospitals etc., and there are prices set for each type of service.

When operating in the public system, patients are asked to co-pay a portion of the cost for each type of care that they receive. To illustrate, a patient requiring hospitalization is liable for 20 percent of costs for the first month, and nothing thereafter.[18]

What this means in terms of funding is that the SAMUs and their SMUR response teams are funded by the government, by means of the hospital funding scheme. They do charge a fee for service, and for a typical patient, 65% of this cost will be covered by the government health insurance scheme and the balance covered by optional additional private insurance.[19] By French law, in an emergency any French hospital or SAMU must treat any patient, regardless of their ability to pay.

As a measure against system abuse, the SAMU physician may refuse to sign the patient's "treatment certificate", resulting in the patient being liable for the full cost of services provided, although in practice, this is rarely done.[20] Most French citizens also carry private health insurance in order to cover all co-payment charges.

In some circumstances, particularly on low-priority calls, patients being transported to hospital may be asked to pay for service in advance, and then seek reimbursement from the government insurance scheme or their private insurance. Although not regarded as ambulances in France, fire department ambulances, when used, provide transportation to hospital without charge. All requests for ambulance service are processed by the local SAMU, which will determine what type of assistance and transportation resources are sent; the patient has no choice in the matter when it is an Intensive Urgent Care Need.