The Emirate of Bukhara (Persian: امارت بخارا‎‎; Uzbek: 'Buxoro amirligi') was a Central Asian[3] state that existed from 1785 to 1920. It occupied the land between the Amu Darya and Syr Darya rivers, known formerly as Transoxiana. Its core territory was the land along the lower Zarafshan River, and its urban centres were the ancient cities of Samarkand and the emirate's capital, Bukhara. It was contemporaneous with the Khanate of Khiva to the west, in Khwarezm, and the Khanate of Kokand to the east, in Fergana. It is now within the boundaries of Uzbekistan. 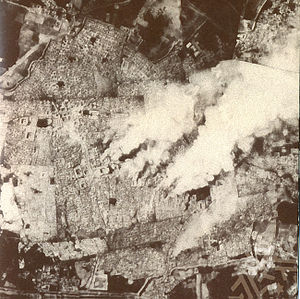 Fires in Bukhara during the Red Army's attack, 1 September 1920 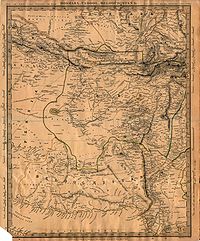 The Emirate of Bukhara (top), with Kabool (centre) and Balochistan (bottom and right).

The borders of the Russian imperial territories of Khiva, Bukhara and Kokand in the time period of 1902-1903.

The Emirate of Bukhara was officially created in 1785, upon the assumption of rulership by the Manghit emir, Shah Murad. It was one of the few states in Central Asia after the Mongol Empire not ruled by descendants of Genghis Khan besides the Timurids and it staked its legitimacy on Islamic principles rather than Genghisid blood as the ruler took the Islamic title of Emir instead of Khan. Both of its neighbors, the Khanate of Khiva and the Kokand Khanate, as well as its predecessor, the Khanate of Bukhara, were ruled by Genghisid descendants. Over the course of the 18th century, the emirs had slowly gained effective control of the Khanate of Bukhara, from their position as ataliq. By the 1740s, when the khanate was conquered by Nadir Shah of Persia, it was clear that the emirs held the real power. In 1747 after Nadir Shah's death, the ataliq Muhammad Rahim Bi murdered Abulfayz Khan and his son, ending the Janid dynasty. From then on the emirs allowed puppet khans to rule until, following the death of Abu l-Ghazi Khan, Shah Murad assumed the throne openly.[4]

Fitzroy Maclean recounts in Eastern Approaches how Charles Stoddart and Arthur Conolly were executed by Nasrullah Khan in the context of The Great Game, and how Joseph Wolff, known as the Eccentric Missionary, escaped their fate when he came looking for them in 1845. He was wearing his full canonical costume, which caused the Emir to burst out laughing, and "Dr Wolff was eventually suffered to leave Bokhara, greatly to the surprise of the populace, who were not accustomed to such clemency.".[5]

In 1868 the emirate lost a war with Imperial Russia, which had colonial aspirations in the region. Russia annexed much of the emirate's territory, including the important city of Samarkand.[6] In 1873 the remainder became a Russian protectorate,[7] and was soon surrounded by the Governorate-General of Turkestan.

Reformists within the Emirate had found the conservative emir, Mohammed Alim Khan, unwilling to loosen his grip on power, and had turned to the Russian Bolshevik revolutionaries for military assistance. The Red Army launched an unsuccessful assault in March 1920, and then a successful one in September of the same year.[8] The Emirate of Bukhara was conquered by the Bolsheviks and replaced with the Bukharan People's Soviet Republic. Today the territory of the defunct emirate lies mostly in Uzbekistan, with parts in Tajikistan, Turkmenistan and Kazakhstan. It had also included present northern Afghanistan between 1793 and 1850.

The emir's daughter Shukria Raad Alimi worked as a broadcaster in Radio Afghanistan. Shukria Raad left Afghanistan with her family three months after Soviet troops invaded the country in December 1979. With her husband, also a journalist, and two children she fled to Pakistan, and then through Germany to the United States. In 1982, she joined the VOA, and has worked as a broadcaster for VOA's Dari Service, editor, host and producer.[9]

Located along important trading routes, Bukhara enjoyed a rich cultural mixture, including Persian (Tajik), Uzbek, and Jewish influences. The city of Bukhara has a rich history of Persian (Tajik) architecture and literature, traditions that were continued into the Emirate Period. Prominent artists of the period include the poet Kiromi Bukhoroi, the calligrapher Mirza Abd al-Aziz Bukhari and the scholar Rahmat-Allah Bukhari. Throughout this period, the madrasahs of the region were renowned.