Empirical research is research using empirical evidence. It is a way of gaining knowledge by means of direct and indirect observation or experience. Empiricism values such research more than other kinds. Empirical evidence (the record of one's direct observations or experiences) can be analyzed quantitatively or qualitatively. Through quantifying the evidence or making sense of it in qualitative form, a researcher can answer empirical questions, which should be clearly defined and answerable with the evidence collected (usually called data). Research design varies by field and by the question being investigated. Many researchers combine qualitative and quantitative forms of analysis to better answer questions which cannot be studied in laboratory settings, particularly in the social sciences and in education.

In some fields, quantitative research may begin with a research question (e.g., "Does listening to vocal music during the learning of a word list have an effect on later memory for these words?") which is tested through experimentation. Usually, a researcher has a certain theory regarding the topic under investigation. Based on this theory some statements, or hypotheses, will be proposed (e.g., "Listening to vocal music has a negative effect on learning a word list."). From these hypotheses predictions about specific events are derived (e.g., "People who study a word list while listening to vocal music will remember fewer words on a later memory test than people who study a word list in silence."). These predictions can then be tested with a suitable experiment. Depending on the outcomes of the experiment, the theory on which the hypotheses and predictions were based will be supported or not,[1] or may need to be modified and then subjected to further testing.

The term empirical was originally used to refer to certain ancient Greek practitioners of medicine who rejected adherence to the dogmatic doctrines of the day, preferring instead to rely on the observation of phenomena as perceived in experience. Later empiricism referred to a theory of knowledge in philosophy which adheres to the principle that knowledge arises from experience and evidence gathered specifically using the senses. In scientific use the term empirical refers to the gathering of data using only evidence that is observable by the senses or in some cases using calibrated scientific instruments. What early philosophers described as empiricist and empirical research have in common is the dependence on observable data to formulate and test theories and come to conclusions.

The researcher attempts to describe accurately the interaction between the instrument (or the human senses) and the entity being observed. If instrumentation is involved, the researcher is expected to calibrate his/her instrument by applying it to known standard objects and documenting the results before applying it to unknown objects. In other words, it describes the research that has not taken place before and their results.

In practice, the accumulation of evidence for or against any particular theory involves planned research designs for the collection of empirical data, and academic rigor plays a large part of judging the merits of research design. Several typologies for such designs have been suggested, one of the most popular of which comes from Campbell and Stanley (1963).[full citation needed] They are responsible for popularizing the widely cited distinction among pre-experimental, experimental, and quasi-experimental designs and are staunch advocates of the central role of randomized experiments in educational research.

Accurate analysis of data using standardized statistical methods in scientific studies is critical to determining the validity of empirical research. Statistical formulas such as regression, uncertainty coefficient, t-test, chi square, and various types of ANOVA (analyses of variance) are fundamental to forming logical, valid conclusions. If empirical data reach significance under the appropriate statistical formula, the research hypothesis is supported. If not, the null hypothesis is supported (or, more accurately, not rejected), meaning no effect of the independent variable(s) was observed on the dependent variable(s).

It is important to understand that the outcome of empirical research using statistical hypothesis testing is never proof. It can only support a hypothesis, reject it, or do neither. These methods yield only probabilities. 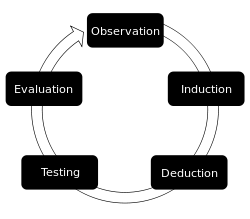