An energy crop is a plant grown as a low-cost and low-maintenance harvest used to make biofuels, such as bioethanol, or combusted for its energy content to generate electricity or heat. Energy crops are generally categorized as woody or herbaceous plants; many of the latter are grasses (Graminaceae).

Commercial energy crops are typically densely planted, high-yielding crop species where the energy crops will be burnt to generate power. Woody crops such as willow[1] or poplar are widely utilised, as well as temperate grasses such as Miscanthus and Pennisetum purpureum (both known as elephant grass).[2] If carbohydrate content is desired for the production of biogas, whole-crops such as maize, Sudan grass, millet, white sweet clover and many others, can be made into silage and then converted into biogas.[3]

Through genetic modification and application of biotechnology plants can be manipulated to create greater yields, reduce associated costs and require less water. However, high energy yield can be realized with existing cultivars.[3]:250 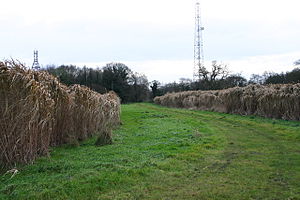 (Note: The terms biofuel, biomass, and so on, are often used interchangeably.)

Energy generated by burning plants grown for the purpose, often after the dry matter is pelletized. Energy crops are used for firing power plants, either alone or co-fired with other fuels. Alternatively they may be used for heat or combined heat and power (CHP) production.

Anaerobic digesters or biogas plants can be directly supplemented with energy crops once they have been ensiled into silage. The fastest growing sector of German biofarming has been in the area of "Renewable Energy Crops" on nearly 500,000 ha of land (2006).[4] Energy crops can also be grown to boost gas yields where feedstocks have a low energy content, such as manures and spoiled grain. It is estimated that the energy yield presently of bioenergy crops converted via silage to methane is about 2 GWh/km². Small mixed cropping enterprises with animals can use a portion of their acreage to grow and convert energy crops and sustain the entire farms energy requirements with about 1/5 the acreage. In Europe and especially Germany, however, this rapid growth has occurred only with substantial government support, as in the German bonus system for renewable energy. Similar developments of integrating crop farming and bioenergy production via silage-methane have been almost entirely overlooked in N. America, where political and structural issues and a huge continued push to centralize energy production has overshadowed positive developments.[citation needed] 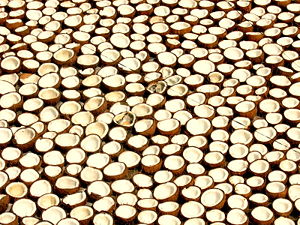 Coconuts sun-dried in Kozhikode, Kerala for making copra, the dried meat, or kernel, of the coconut. Coconut oil extracted from it has made copra an important agricultural commodity for many coconut-producing countries. It also yields coconut cake which is mainly used as feed for livestock. 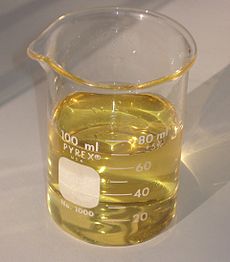 Pure biodiesel (B-100), made from soybeans

European production of biodiesel from energy crops has grown steadily in the last decade, principally focused on rapeseed used for oil and energy. Production of oil/biodiesel from rape covers more than 12,000 km² in Germany alone, and has doubled in the past 15 years.[5] Typical yield of oil as pure biodiesel may be is 100,000 L/km² or more, making biodiesel crops economically attractive, provided sustainable crop rotations exist that are nutrient-balanced and preventative of the spread of disease such as clubroot. Biodiesel yield of soybeans is significantly lower than that of rape.[citation needed]

Energy crops for biobutanol are grasses. Two leading non-food crops for the production of cellulosic bioethanol are switchgrass and giant miscanthus. There has been a preoccupation with cellulosic bioethanol in America as the agricultural structure supporting biomethane is absent in many regions, with no credits or bonus system in place.[citation needed] Consequently, a lot of private money and investor hopes are being pinned on marketable and patentable innovations in enzyme hydrolysis and the like.

Bioethanol also refers to the technology of using principally corn (maize seed) to make ethanol directly through fermentation, a process that under certain field and process conditions can consume as much energy as is the energy value of the ethanol it produces, therefore being non-sustainable. New developments in converting grain stillage (referred to as distillers grain stillage or DGS) into biogas energy looks promising as a means to improve the poor energy ratio of this type of bioethanol process.