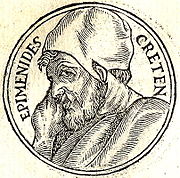 The Epimenides paradox reveals a problem with self-reference in logic.

It is named after the Cretan philosopher Epimenides of Knossos (alive circa 600 BC) who is credited with the original statement.

A typical description of the problem is given in the book Gödel, Escher, Bach, by Douglas Hofstadter

Epimenides was a Cretan who made one immortal statement: "All Cretans are liars."

A paradox of self-reference arises when one considers whether it is possible for Epimenides to have spoken the truth.

The Epimenides paradox in this form can however be solved. A paradox only results when the statement is assumed to be true. Namely, if the statement "all Cretans are liars" (stated by Epimenides, himself a Cretan) is true, then Epimenides, being a Cretan, would be a liar; making the assumption that liars only make false statements, the statement should be false. So assuming the statement is true leads us to conclude that the statement is false and cannot be accepted, therefore it must be true, continuing in a self-referential paradox.

However, if we assume the statement is false and that Epimenides is lying about all Cretans being liars, then there must exist at least one Cretan who is honest. This does not lead to contradiction, since it is not required that this Cretan be Epimenides, meaning that Epimenides can say the false statement that all Cretans are Liars while knowing at least one honest Cretan and lying about this particular Cretan. Hence, from the assumption that the statement is false it does not follow that the statement is true. So we can avoid a paradox as seeing the statement "all Cretans are liars" as a false statement, which is made by a lying Cretan, Epimenides.[2][3] The mistake made by Thomas Fowler (and many other people) above is to think that the negation of "all Cretans are liars" is "all Cretans are honest" (a paradox) when in fact the negation is "there exists a Cretan who is honest", or "not all Cretans are liars". The Epimenides paradox can be slightly modified as to not allow the kind of solution described above, as it was in the first paradox of Eubulides but instead leading to a non-avoidable self-contradiction. Paradoxical versions of the Epimenides problem are closely related to a class of more difficult logical problems, including the liar paradox, Socratic paradox, and the Burali-Forti paradox, all of which have self-reference in common with Epimenides. Indeed, the Epimenides paradox is usually classified as a variation on the liar paradox, and sometimes the two are not distinguished. The study of self-reference led to important developments in logic and mathematics in the twentieth century.

To psychology, scepticism and law

The same goes for any statements that laws are necessary due to human nature, since the laws are written and enforced by human beings and so if that was the case the alleged human flaws would have been built into the laws and exaggerated by the enforcement into something worse than nothing.[8][9][10]

Origin of the phrase

Epimenides was a 6th-century BC philosopher and religious prophet who, against the general sentiment of Crete, proposed that Zeus was immortal, as in the following poem:

They fashioned a tomb for thee, O holy and high one
The Cretans, always liars, evil beasts, idle bellies!
But thou art not dead: thou livest and abidest forever,
For in thee we live and move and have our being.

Denying the immortality of Zeus, then, was the lie of the Cretans.

The phrase "Cretans, always liars" was quoted by the poet Callimachus in his Hymn to Zeus, with the same theological intent as Epimenides:

O Zeus, some say that thou wert born on the hills of Ida;
Others, O Zeus, say in Arcadia;
Did these or those, O Father lie? -- “Cretans are ever liars.”
Yea, a tomb, O Lord, for thee the Cretans builded;
But thou didst not die, for thou art for ever.

— Callimachus, Hymn I to Zeus

Emergence as a logical contradiction

The logical inconsistency of a Cretan asserting all Cretans are always liars may not have occurred to Epimenides, nor to Callimachus, who both used the phrase to emphasize their point, without irony, perhaps meaning that all Cretans lie routinely, but not exclusively.

In the 1st century AD, the quote is mentioned by Paul of Tarsus as the words of a man who was insubordinate, an empty talker and a deceiver, yet spoke truly in this statement.

One of Crete's own prophets has said it: 'Cretans are always liars, evil brutes, idle bellies'.
He has surely told the truth. For this reason correct them sternly, that they may be sound in faith instead of paying attention to Jewish fables and to commandments of people who turn their backs on the truth.

Clement of Alexandria, in the late 2nd century AD, fails to indicate that the concept of logical paradox is an issue:

In his epistle to Titus, Apostle Paul wants to warn Titus that Cretans don't believe in the one truth of Christianity, because "Cretans are always liars". To justify his claim, Apostle Paul cites Epimenides.

During the early 4th century, Saint Augustine restates the closely related liar paradox in Against the Academicians (III.13.29), but without mentioning Epimenides.

In the Middle Ages, many forms of the liar paradox were studied under the heading of insolubilia, but these were not explicitly associated with Epimenides.

Finally, in 1740, the second volume of Pierre Bayle's Dictionnaire Historique et Critique explicitly connects Epimenides with the paradox, though Bayle labels the paradox a "sophisme".[11]

References by other authors

All of the works of Epimenides are now lost, and known only through quotations by other authors. The quotation from the Cretica of Epimenides is given by R.N. Longenecker, "Acts of the Apostles", in volume 9 of The Expositor's Bible Commentary, Frank E. Gaebelein, editor (Grand Rapids, Michigan: Zondervan Corporation, 1976–1984), page 476. Longenecker in turn cites M.D. Gibson, Horae Semiticae X (Cambridge: Cambridge University Press, 1913), page 40, "in Syriac". Longenecker states the following in a footnote:

The Syr. version of the quatrain comes to us from the Syr. church father Isho'dad of Merv (probably based on the work of Theodore of Mopsuestia), which J.R. Harris translated back into Gr. in Exp ["The Expositor"] 7 (1907), p 336.

An oblique reference to Epimenides in the context of logic appears in "The Logical Calculus" by W. E. Johnson, Mind (New Series), volume 1, number 2 (April, 1892), pages 235–250. Johnson writes in a footnote,

The Epimenides paradox appears explicitly in "Mathematical Logic as Based on the Theory of Types", by Bertrand Russell, in the American Journal of Mathematics, volume 30, number 3 (July, 1908), pages 222–262, which opens with the following:

The oldest contradiction of the kind in question is the Epimenides. Epimenides the Cretan said that all Cretans were liars, and all other statements made by Cretans were certainly lies. Was this a lie?

In that article, Russell uses the Epimenides paradox as the point of departure for discussions of other problems, including the Burali-Forti paradox and the paradox now called Russell's paradox. Since Russell, the Epimenides paradox has been referenced repeatedly in logic. Typical of these references is Gödel, Escher, Bach by Douglas Hofstadter, which accords the paradox a prominent place in a discussion of self-reference.