The Episcopal Divinity School is a seminary of the Episcopal Church based in Cambridge, Massachusetts, United States.

Known throughout the Anglican Communion for progressive teaching and action on issues of civil rights and social justice, its faculty and students have been directly involved in many of the social controversies surrounding the Episcopal Church in the latter half of the 20th century and at the start of the 21st. 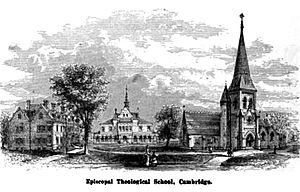 PDS and ETS had both attempted to insulate themselves from affiliations with partisan factions within the church. Where other seminaries that existed or would come to exist within the Episcopal Church often affiliated themselves with either the high church or low church movements, PDS and ETS focused on broad social and academic matters rather than issues of churchmanship as such. This may affiliate them with broad church movements, although neither institution explicitly identified themselves as such. EDS has continued in that tradition.

PDS, ETS and EDS have all been known for their focus on pastoral action around progressive social issues.

From its inception, PDS admitted and trained African-American students, which was not done anywhere else in the world. The Episcopal Church itself, originally as the Church of England under the Bishop of London in British colonies in North America, had early seen several attempts from within at including African-American and indigenous American peoples in the full life of the church; the first person to be baptized in the Church of England in North America was a Native American person. Social values, particularly with the rise of racial slavery in North America, meant that there were considerable obstacles to such practices, and debates over whether it was right to baptize African-American slaves were controversial. Clergy who baptized slaves were often expelled from their parishes by the wealthy vestries which held their contracts. The church was largely controlled by affluent whites and despite rare actions by clergy, African-American slaves and ex-slaves were largely excluded from participation in the life of the church.

Education and ordination of women

In the 1880s, PDS begin training women as deaconnesses. In 1929 women were first admitted at PDS in small numbers to theological education programs designed for those preparing to teach religion in colleges.

ETS became the first Episcopal seminary to hire a woman, in 1941, to its full-time faculty.

In 1974, after the formation of EDS, 11 women known as the Philadelphia Eleven were "irregularly" ordained to the priesthood of the Episcopal Church. Several EDS faculty members took part in the ordination and two of the new priests, Carter Heyward and Suzanne Hiatt, were employed as EDS faculty. The affiliation of EDS with this ordination would cause many bishops to refuse to send their postulants for ordination to EDS to receive a theological education. EDS retained a reputation for controversy stemming from this incident even after the Episcopal Church as a whole voted to ordain women to the priesthood in 1976. EDS quickly became the first Episcopal seminary to have women teaching in all fields of study.

In 1956, Bishop Henry Knox Sherrill, who graduated from ETS in 1914, spoke out at a press conference in favor of racial integration for the whole church, citing it as being "fundamental to the heart of the Gospel".[citation needed]

In 1964, members of the ETS community marched in Boston to protest the racially-motivated Birmingham church bombings. In the following year, ETS students and faculty traveled to Alabama to take part in the Selma to Montgomery marches. Several students sought to return to Alabama after the Selma marches to continue to work for racial integration in that state. Jonathan Myrick Daniels, one of those students, was shot and killed outside a store in Hayneville, Alabama, while trying to protect a young African-American woman, Ruby Sales, from a gunman. Sales would go on to attend ETS herself and work for civil rights, founding an inner-city mission dedicated to Daniels who is remembered as a martyr of the Episcopal Church and is remembered regularly at EDS.

In the 1960s, ETS students who were suspected of being homosexual were dismissed, but as church and social opinion began to slowly turn in favor of tolerance of homosexuals, EDS would become a leading center of studies on LGBT issues within the Episcopal Church and the wider Anglican Communion. In 1974, ethics professor William Hayden McCallum came out as a gay man to the school community. Associate professor and priest Carter Heyward came out as a lesbian to the church in a nationwide publication in 1979. By the 1980s, EDS permitted same-sex couples to live in campus housing as it did heterosexual couples previously. In 1995, when St. John's Memorial Chapel was opened to marriage services by Dean William Rankin, both heterosexual marriages and same-sex unions were permitted, contrary to the trend in the Episcopal Church at the time. In 2009, the Very Rev. Katherine Hancock Ragsdale became the Dean of EDS, the first openly-lesbian person to be dean of an Episcopal seminary.