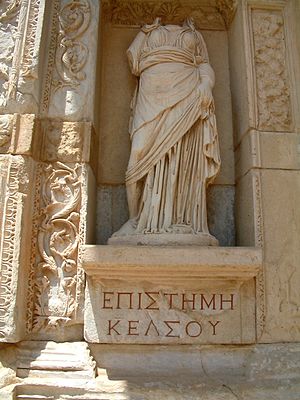 Personification of Episteme in Celsus Library in Ephesus, Turkey.

Episteme means knowledge, as in "justified true belief" in the terminology of the philosopher Plato. It is etymologically derived from the Ancient Greek word ἐπιστήμη for knowledge or science, which comes from the verb ἐπίσταμαι, "to know". Episteme as knowledge contrasts doxa, Plato's term for common belief or opinion. Episteme is distinguished from techne, which is knowledge in an applied way as in a craft. The word epistemology, means the study of knowledge, and is derived from episteme.

The French philosopher and social theorist Michel Foucault used the term épistème in a highly specialized sense in his work The Order of Things to mean the historical a priori that grounds knowledge and its discourses and thus represents the condition of their possibility within a particular epoch. In subsequent writings, he made it clear that several epistemes may co-exist and interact at the same time, being parts of various power-knowledge systems. But he did not discard the concept:

I would define the episteme retrospectively as the strategic apparatus which permits of separating out from among all the statements which are possible those that will be acceptable within, I won’t say a scientific theory, but a field of scientificity, and which it is possible to say are true or false. The episteme is the ‘apparatus’ which makes possible the separation, not of the true from the false, but of what may from what may not be characterised as scientific.[1]

Yet in Foucault's The Order of Things he describes Episteme as:

However, if in any given culture and at any given moment, there is always only one episteme that defines the conditions of possibility of all knowledge, whether expressed in a theory or silently invested in a practice. (Foucault, 168)

Foucault's use of episteme has been asserted as being similar to Thomas Kuhn's notion of a paradigm, as for example by Jean Piaget.[2] However, there are decisive differences. Whereas Kuhn's paradigm is an all-encompassing collection of beliefs and assumptions that result in the organization of scientific worldviews and practices, Foucault's episteme is not merely confined to science but to a wider range of discourse (all of science itself would fall under the episteme of the epoch). While Kuhn's paradigm shifts are a consequence of a series of conscious decisions made by scientists to pursue a neglected set of questions, Foucault's epistemes are something like the 'epistemological unconscious' of an era; the configuration of knowledge in a particular episteme is based on a set of fundamental assumptions that are so basic to that episteme so as to be invisible to people operating within it. Moreover, Kuhn's concept seems to correspond to what Foucault calls theme or theory of a science, but Foucault analysed how opposing theories and themes could co-exist within a science.[3] Kuhn doesn't search for the conditions of possibility of opposing discourses within a science, but simply for the (relatively) invariant dominant paradigm governing scientific research (supposing that one paradigm always is pervading, except under paradigmatic transition). In contrast, Foucault attempts to demonstrate the constitutive limits of discourse, and in particular, the rules enabling their productivity; however, Foucault maintained that though ideology may infiltrate and form science, it need not do so: it must be demonstrated how ideology actually forms the science in question; contradictions and lack of objectivity is not an indicator of ideology.[4] Kuhn's and Foucault's notions are both influenced by the French philosopher of science Gaston Bachelard's notion of an "epistemological rupture", as indeed was Althusser.[citation needed] In 1997, Judith Butler used the concept of episteme in her book Excitable Speech, examining the use of speech-act theory for political purposes.[citation needed]

"Truth is a thing of this world: it is produced only by virtue of multiple forms of constraint. And it induces regular effects of power. Each society has its regime of truth, its “general politics” of truth: that is, the types of discourse which it accepts and makes function as true; the mechanisms and instances which enable one to distinguish true and false statements, the means by which each is sanctioned; the techniques and procedures accorded value in the acquisition of truth; the status of those who are charged with saying what counts as true"[5][6]