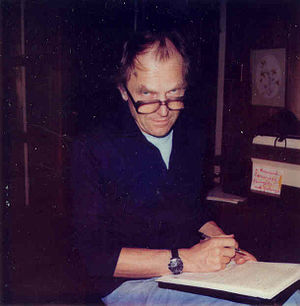 Epistemological anarchism is an epistemological theory advanced by Austrian philosopher of science Paul Feyerabend which holds that there are no useful and exception-free methodological rules governing the progress of science or the growth of knowledge. It holds that the idea that science can or should operate according to universal and fixed rules is unrealistic, pernicious, and detrimental to science itself.[1]

The use of the term anarchism in the name reflected the methodological pluralism prescription of the theory, as the purported scientific method does not have a monopoly on truth or useful results. Feyerabend once famously said that because there is no fixed scientific method, it is best to have an "anything goes" attitude toward methodologies.[1] Feyerabend felt that science started as a liberating movement, but over time it had become increasingly dogmatic and rigid, and therefore had become increasingly an ideology, and, despite its successes, science had started to attain some oppressive features, and it was not possible to come up with an unambiguous way to distinguish science from religion, magic, or mythology. He felt the exclusive dominance of science as a means of directing society was authoritarian and ungrounded.[1] Promulgation of the theory earned Feyerabend the title of "the worst enemy of science" from his detractors.[2]

The theory draws on the observation that there is no identifiable fixed scientific method that is consistent with the practices of the paradigm of scientific progress – the scientific revolution.[2] It is a radical critique of rationalist and empiricist historiography which tend to represent the heroes of the scientific revolution as scrupulous researchers reliant on empirical research, whereas Feyerabend countered that Galileo for example, relied on rhetoric, propaganda and epistemological tricks to support his doctrine of heliocentrism, and that aesthetic criteria, personal whims and social factors were far more prevalent than the dominant historiographies allowed.[2]

Scientific laws such as those posited by Aristotelian or Newtonian physics that assumed the stance of objective models of the universe have been found to come short in describing the entirety of the universe. The movement of universal models from Aristotelian to Newtonian physics to Einstein's relativity theory, where each preceding theory has been refuted as entirely universal model of reality, illustrates for the epistemological anarchist that scientific theories do not correspond to truth, as they are in part cultural manifestations, and ergo not objective.[1][3] Feyerabend drew a comparison between one scientific paradigm triumphing over or superseding another, in the same manner a given myth is adapted and appropriated by a new, triumphant successor myth in comparative mythology. Feyerabend contended, with Imre Lakatos, that the demarcation problem of distinguishing on objective grounds science from pseudoscience was irresolvable and thus fatal to the notion of science run according to fixed, universal rules.[1]

Feyerabend also notes that science's success is not solely due to its own methods, but also to its having taken in knowledge from unscientific sources. In turn the notion that there is no knowledge outside science is a 'convenient fairy-tale' held only by dogmatists who distort history for the convenience of scientific institutions.[4] For instance, Copernicus was heavily influenced by Pythagoras, whose view of the world had previously been rejected as mystical and irrational. Hermetic writings played an important role in the works of Copernicus as well as Newton.[5] There exists fairly accurate astronomical knowledge that reaches back even to the Stone Age, measured in stone observatories in England and the South Pacific.[5] Pre-Modern inventions such as crop rotation, hybrid plants, chemical inventions and architectural achievements not yet understood like that of the pyramids are all examples which threaten the notion that science is the only means of attaining knowledge.[5]

Feyerabend also criticized science for not having evidence for its own philosophical precepts, particularly the notions of Uniformity of Law and of Uniformity of Process across time and space. "We have to realize that a unified theory of the physical world simply does not exist," said Feyerabend; "we have theories that work in restricted regions, we have purely formal attempts to condense them into a single formula, we have lots of unfounded claims (such as the claim that all of chemistry can be reduced to physics), phenomena that do not fit into the accepted framework are suppressed; in physics, which many scientists regard as the one really basic science, we have now at least three different points of view...without a promise of conceptual (and not only formal) unification".[6]

Furthermore, Feyerabend held that deciding between competing scientific accounts was complicated by the incommensurability of scientific theories. Incommensurability means that scientific theories cannot be reconciled or synthesized because the interpretation and practice of science is always informed by theoretical assumptions, which leads to proponents of competing theories using different terms, engaged in different language-games and thus talking past each other. This for Feyerabend was another reason why the idea of science as proceeding according to universal, fixed laws was both historically inaccurate and prescriptively useless.

Terence McKenna was a fan of philosophers such as Feyerabend and Thomas Kuhn.[7]

Ian Hacking was a friend of Feyerabend's, and they corresponded with and cited each other. He wrote the introduction and praised the last edition of Against Method, quoting French philosopher Jean Largeault, who called it "more than a book: it is an event".[8]

Imre Lakatos was also a friend of Feyerabend's. The two wrote letters to each other on the philosophy of science which would have been published in a book called For and Against Method, but the death of Lakatos ended their plans to produce this dialogue volume.[9] While Lakatos never publicly labeled himself so, Feyerabend contended that he was a fellow epistemological anarchist. Lakatos was the one who suggested and encouraged that Feyerabend write a book based on his philosophy and the lectures he gave in his classes, which turned out to be his seminal work Against Method.[10]