The Epistulae Morales ad Lucilium (Latin for "Moral Letters to Lucilius"), also known as the Moral Epistles and Letters from a Stoic, is a collection of 124 letters that Seneca the Younger wrote at the end of his life, during his retirement, after he had worked for the Emperor Nero for more than ten years. They are addressed to Lucilius Junior, the then procurator of Sicily, who is known only through Seneca's writings. Regardless of how Seneca and Lucilius actually corresponded, it is clear that Seneca crafted the letters with a broad readership in mind.

The letters often begin with an observation on daily life, and then proceed to an issue or principle abstracted from that observation. The result is like a diary, or handbook of philosophical meditations. The letters focus on many traditional themes of Stoic philosophy such as the contempt of death, the stout-heartedness of the sage, and virtue as the supreme good.

The Letters were probably written in the last three years of Seneca's life. Scholars generally agree that the letters are arranged in the order in which Seneca wrote them.[1] In letter 8, Seneca alludes to his retirement from public life, which is thought (by reference to Tacitus Annals xiv. 52–6) to have been around spring of the year 62.[2] Letter 18 was written in December, in the run-up to the Saturnalia. Letter 23 refers to a cold spring, presumably in 63.[2] Letter 67 refers to the end of a cold spring and is thought (to allow forty-three intervening letters) to have been written the following year.[2] Letter 91 refers to the great fire of Lugdunum (Lyon) that took place in the late summer of 64.[2] Letter 122 refers to the shrinking daylight hours of autumn.[3] Other chronologies are possible—in particular if letters 23 and 67 refer to the same spring, that can reduce the timescale by a full year.[2]

The 124 letters are arranged in twenty manuscript volumes, but the collection is not complete.[4] Aulus Gellius (mid-2nd-century) quotes an extract from the "twenty-second book", so some letters are missing.[5] However since the fire of Lyon mentioned in letter 91 took place less than a year before Seneca's death (in spring 65) the number of missing letters is not thought to be very many.[5]

Collectively the letters constitute Seneca's longest work.[5] Although addressed to Lucilius, the letters take the form of open letters,[6] and are clearly written with a wider readership in mind.[7] The epistolary genre was well-established in Seneca's time.[8] Seneca refers to Cicero's letters to Atticus and the letters of Epicurus, and he was probably familiar with the letters of Plato and the epistles of Horace.[9] However, despite the careful literary crafting, there is no obvious reason to doubt that they are real letters.[1] Seneca often says that he is writing in response to a letter from Lucilius, although there is unlikely to have been a strict back-and-forth exchange of letters.[10] Even if both writers had access to the imperial mail service, a letter from central Italy to Sicily would have taken four to eight days to travel.[10] In many instances Seneca probably composed letters as a new subject occurred to him.[10] On average the letters tend to become longer over time,[4] and the later letters focus increasingly on theoretical questions.[11] However even in the later letters Seneca continues to include letters that are very short.[12] 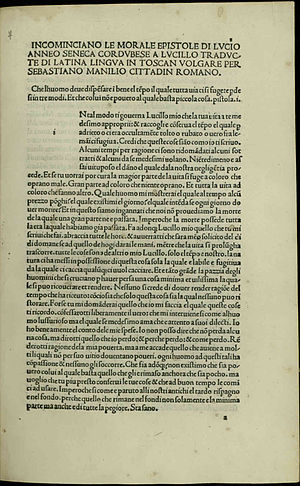 Incipit page of the first printed edition of the Epistles in the "Tuscan" i.e. Italian version (1494).

The letters all start with the phrase "Seneca Lucilio suo salutem" ("Seneca greets his Lucilius") and end with the word "Vale" ("Farewell"). In these letters, Seneca gives Lucilius advice on how to become a more devoted Stoic. Some of the letters include "On Noise" and "Asthma". Others include letters on "the influence of the masses" and "how to deal with one's slaves" (Letter 47). Although they deal with Seneca's personal style of Stoic philosophy, they also give us valuable insights into daily life in ancient Rome.

There is a general tendency throughout the letters to open proceedings with an observation of a specific (and usually rather minor) incident, which then digresses to a far wider exploration of an issue or principle that is abstracted from it.[13] In one letter (letter 7), for instance, Seneca begins by discussing a chance visit to an arena where a gladiatorial combat to the death is being held; Seneca then questions the morality and ethics of such a spectacle, in what is the first record (to our current knowledge) of a pre-Christian writer bringing up such a debate on that particular matter.[13]

Seneca's letters are focused on the inner-life, and the joy that comes from wisdom.[16] He emphasizes the Stoic theme that virtue is the only true good and vice the only true evil.[11] He repeatedly refers to the brevity of life and the fleeting nature of time.[1]

Underlying a large number of the letters is a concern with death on the one hand (a central topic of Stoic philosophy, and one embodied in Seneca's observation that we are "dying every day") and suicide on the other, a key consideration given Seneca's deteriorating political position and the common use of forced suicide as a method of elimination of figures deemed oppositional to the Emperor's power and rule.[13]

Early letters often conclude with a maxim to meditate on, although this strategy is over by the thirtieth letter.[12] Such maxims are typically drawn from Epicurus, but Seneca regards this as a beginner's technique.[17] In letter 33 he stresses that the student must begin to make well-reasoned judgements independently.[17]

The language and style of the letters is quite varied, and this reflects the fact that they are a mixture of private conversation and literary fiction. As an example, there is a mix of different vocabulary, incorporating technical terms (in fields such as medicine, law and navigation) as well as colloquial terms and philosophical ones.[18] Seneca also uses a range of devices for particular effects, such as ironic parataxis, hypotactic periods, direct speech interventions and rhetorical techniques such as alliterations, chiasmus, polyptoton, paradoxes, antitheses, oxymoron, etymological figures and so forth. In addition there are neologisms and hapax legomena.[18]

The oldest manuscripts of the letters date from the ninth-century.[19] For a long time the letters did not circulate together, letters 89–124 in particular appear in their own manuscripts.[19] They began to be widely circulated together from the twelfth-century onwards.[20] The first printed edition appeared in 1475.[20] Erasmus produced a much superior edition in 1529.[20]

Michel de Montaigne was influenced by his reading of Seneca's letters,[21] and he modelled his Essays on them.[20] The letters were a principal source for Justus Lipsius for the development of his Neostoicism towards the end of the 16th-century.[20]

There have been several full translations of the 124 letters ever since Thomas Lodge included a translation in his complete works of 1614.

There have been many selected and abridged translations of Seneca's letters. Recent editions include:

The work is also the source for the phrase non scholae sed vitae: "We do not learn for school, but for life".