Robert Eric Betzig (born January 13, 1960) is an American physicist based at the Janelia Farm Research Campus in Ashburn, Virginia.[2] He has worked to develop the field of fluorescence microscopy and photoactivated localization microscopy. He was awarded the 2014 Nobel Prize in Chemistry for "the development of super-resolved fluorescence microscopy"[3] along with Stefan Hell and fellow Cornell alumnus William E. Moerner.[4] 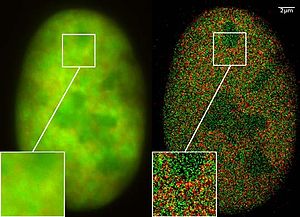 Betzig was born in Ann Arbor, Michigan in 1960, the son of Robert Betzig, an engineer, and Helen Betzig. Aspiring to work in the aerospace industry, Betzig studied Physics at the California Institute of Technology and graduated with a BS degree in 1983. He then went on to study at Cornell University where he was advised by Aaron Lewis and Michael Isaacson. There he obtained an MS degree and a PhD degree in Applied and Engineering physics in 1985 and 1988, respectively. For his PhD he focused on developing high resolution optical microscopes that could see past the theoretical limit of .2 micrometers.[5][6]

After receiving his doctorate, Betzig was hired by AT&T Bell Laboratories in the Semiconductor Physics Research Department in 1989. That year Betzig's colleague, William E. Moerner, developed the first optical microscope that could see past the .2 micrometer limit, known as the Abbe limit, but it could only function at temperatures near absolute zero. Betzig was awarded the William L. McMillan Award in 1992. Inspired by Moerner's research, he became the first person to image individual fluorescent molecules at room temperature while determining their positions to more than .2 micrometers in 1993. For this he received the William O. Baker Award for Initiatives in Research which was at the time, the National Academy of Sciences Award for Initiatives in Research.[5]

In 1994, Betzig became frustrated with the academic community and the uncertainty of the corporate structure of Bell Laboratories causing him to leave both. He spent a some years as a house husband before reentering the workforce.[7] At his father's wish, in 1996 he took up the position of vice president of research and development at Ann Arbor Machine Company, then owned by the Betzig family.[4] Here he developed Flexible Adaptive Servohydraulic Technology (FAST) and after spending millions of dollars on development, sold a total of two devices which did not allow him to achieve commercial success.[5][6][7][8]

In 2002, Betzig then returned to the field of microscopy by founding a firm known as New Millennium Research, in Okemos, Michigan. Inspired by the work of Mike Davidson and his fluorescent proteins, he developed photoactivated localization microscopy (PALM), a method of controlling fluorescent proteins using pulses of light to create images of a higher resolution than previously thought possible. In the living room of his old Bell Labs collaborator, Harald Hess, they developed the first optical microscope based on this technology. They built their first prototype in less than two months, gathering widespread attention. In October of that year, Janelia hired him, but his lab was still under construction at the time.[6]

In early 2006, he formally joined the Howard Hughes Medical Institute's Janelia Farm Research Campus as a group leader to work on developing super high-resolution fluorescence microscopy techniques. He used this technique to study the division of cells in human embryos.[4][9] In 2010, he was offered the Max Delbruck Prize, but he declined it allowing Xiaowei Zhuang to receive the award. In 2014, Betzig was jointly awarded the Nobel Prize in Chemistry along with Stefan Hell and William E. Moerner.[3][6][10]