Erich Hoepner (14 September 1886 – 8 August 1944) was a German general in World War II. A successful panzer leader, Hoepner was implicated in the failed 20 July Plot against Adolf Hitler and executed in 1944.

World War I and interwar period 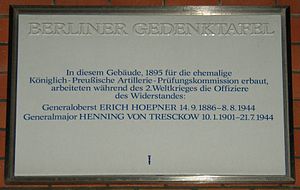 Memorial plaque for Erich Hoepner and Henning von Tresckow in the Bundeshaus, Berlin.

Hoepner was born in Frankfurt an der Oder, Brandenburg. He joined the German Army as an officer cadet in 1905, was commissioned as a Lieutenant in 1906 and served as a cavalry officer during World War I, reaching the rank of Rittmeister (equivalent to captain).

He remained in the Reichswehr in the Weimar Republic and reached the rank of General in 1936. Hoepner was an early advocate of armoured warfare and was promoted to the rank of lieutenant-general and given command of the XVI Panzer Corps in 1938. Hoepner was often called "Der Alte Reiter" (the old cavalryman).[citation needed]

While Hoepner was opposed to the terms of the Treaty of Versailles, he was also an early opponent of Adolf Hitler's rise to power, and thought Hitler's strategic decisions would lead to the ruin of Germany. Hoepner participated in several conspiracies to overthrow Hitler. In the September 1938 Oster Conspiracy, Hoepner's forces were assigned the task of suppressing Hitler's personal guard, the SS Leibstandarte SS following the planned capture and intended shooting of Hitler in the act of "resisting arrest". This plot collapsed, due to the capitulation by Chamberlain (which completely undercut the basis for the coup), and Hoepner's role went undiscovered.

Hoepner played an active part in a conspiracy during October–November 1939, after World War II had already begun, involving the very top levels of the Abwehr and the Oberkommando des Heeres (OKH, or High Command). Following the Fall of France, the fears that Hitler's expansionist policies would bring ruin upon Germany appeared to have been wrong, and Hoepner, like most opposition generals, even on the OKH, became less critical of Hitler.

On the Eastern front

Hoepner commanded the XVI Army Corps (Motorised) in the invasions of Poland (1939) and France (1940), receiving the Knight's Cross of the Iron Cross. He was promoted to the rank of Generaloberst (colonel general) in 1941 and given command of the Fourth Panzer Group for the invasion of the Soviet Union.

On 5 December 1941 Hoepner ordered a retreat of his over-extended forces, refusing to comply with Hitler's rigid categorical 'Halt Order'. A month later, on 8 January 1942, Hoepner was dismissed from the Wehrmacht with the loss of all his pension rights. Subsequently Hoepner instituted a lawsuit against the Reich over his pension rights. His lawsuit was successful.[1]

During his command on the Eastern Front, Hoepner pursued a policy of scorched earth, demanding "ruthless and complete destruction of the enemy" from his soldiers.[2] As a commander of the Fourth Panzer Army, he wrote on May 2, 1941: "The war against the Soviet Union is the old struggle of the Germans against the Slavs, the warding off of Jewish Bolshevism. No mercy should be shown towards the carriers of the present Russian Bolshevist system."[3]

The commander of Einsatzgruppe A, Dr. Franz Walter Stahlecker, spoke highly of Hoepner and described his relations with him as "very close, yes, almost cordial." Hoepner also wrote that Operation Barbarossa represented "the defense of European culture against Moscovite-Asiatic inundation, and the repulse of Jewish Bolshevism," adding that destruction of Russia "must be conducted with unprecedented severity."[4] 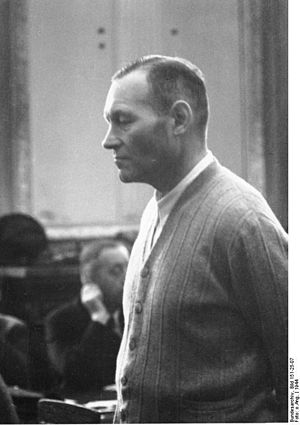 Hoepner was a participant in the 20 July Plot in 1944 and was present at the Bendlerblock (Headquarters of the Replacement Army) with General of the Infantry (General der Infanterie) Friedrich Olbricht, Oberst (colonel) Claus von Stauffenberg, Oberst Albrecht Mertz von Quirnheim and Oberleutnant (first lieutenant) Werner von Haeften. Following the failure of the coup attempt, he had a private conversation with Generaloberst (colonel general) Friedrich Fromm and was not shot by firing squad with the others in the courtyard.

He was arrested that night, and then tortured by the Gestapo, given a summary trial by the Volksgerichtshof and sentenced to death. Like other defendants including Generalfeldmarschall (general field marshal) Erwin von Witzleben, Hoepner was made to wear ill fitting clothes and was not allowed to have his false teeth as a humiliation in his trial. Although judge Roland Freisler continued to verbally attack Hoepner brutally, even Freisler objected to Hoepner being made to dress in such a way.[5] Hoepner was hanged on 8 August, in Berlin's Plötzensee Prison.[6]

Under the Nazi practice of Sippenhaft, by which family members were punished collectively for the crimes of their kin, Hoepner's wife, daughter and sister were sent to Ravensbrück concentration camp, where Frau Hoepner and her daughter were placed in the notorious Strafblock for four weeks further punishment.[7]

In 1956, a school in Berlin was named after Hoepner because he had joined the 20 July plot and was hanged by the Nazis. The school voted to drop the name in 2008. The publication The National quoted the school's director as saying in 2009: "The name had been controversial from the start and was repeatedly debated. I can't judge [Hoepner's] role in the resistance to Hitler, but many aspects of his role in World War Two are less than salubrious." [8]

In the 2004 German production, Stauffenberg, Hoepner is portrayed by actor Ronald Nitschke.