From Infogalactic: the planetary knowledge core
Jump to: navigation, search
Not to be confused with Erich Neumann. 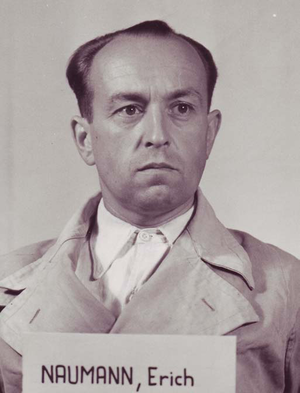 Erich Naumann at the Nuremberg Trials.

Erich Naumann (29 April 1905 – 7 June 1951) was an SS-Brigadeführer, member of the SD. Naumann was responsible for genocide in eastern Europe as commander of Einsatzgruppe B and was a convicted war criminal.

Born 29 April 1905, in Meissen, Saxony, Erich Naumann left school at the age of sixteen and obtained employment in a commercial firm in his home town of Meissen. He joined the Nazi party in November 1929 (nr. 170257). In 1933, Naumann joined the SA in a full-time capacity and then became an official and officer of police. He joined the SD in 1935. He was Chief of Einsatzgruppe B from November 1941 until February or March 1943.

During November 1941, reports he sent to Adolf Eichmann state that he was responsible for the deaths of 17,256 people in Smolensk. Under his command, he admitted that his Einsatzgruppe possessed three gas vans which "were used to exterminate human beings".[1]

After capture by the Allies, Naumann stood trial at Nuremberg. During the proceedings he repeatedly stated that he did not consider his actions during his tenure as commanding officer of Einsatzgruppe B wrong.[1] When asked on the witness stand whether he saw anything morally wrong about the Führer's orders, he replied specifically that he:

"considered the decree to be right because it was part of our aim of the war and, therefore, it was necessary".

He was found guilty of war crimes, crimes against humanity and belonging to illegal organizations, namely the SS and the SD. Naumann was sentenced to death and hanged shortly after midnight on 7 June 1951.[2]