Erich von dem Bach-Zelewski (1 March 1899 – 8 March 1972) was a German SS-Obergruppenführer (General) mainly active in Central Russia, directing anti-partisan warfare, and in Poland, leading the suppression of the Warsaw uprising. Despite his involvement in war crimes he did not stand trial in Nuremberg, but was imprisoned for politically motivated murders after the war and died in jail.

Zelewski was born in Lauenburg, Pomerania, German Empire on 1 March 1899. Despite his aristocratic genealogy, he seems to have grown up in poverty; his father, Otto, proved unable to establish a career and undertook a range of jobs, including agriculture. At the time of his death, Otto von Zelewski was an insurance clerk. His uncle, Oskar von Zelewski, a soldier, developed a close relationship with his nephew and encouraged him to also pursue a military career. In November 1914, he volunteered for the Prussian army — one of its youngest recruits — and served throughout World War I.[3] He was wounded twice, then gassed in 1918, to the long-term detriment of his health, and was awarded the Iron Cross.[2][4]

After the war, Zelewski remained in the Reichswehr. He fought in the Freikorps against the Polish Silesian Uprisings. In 1924 he resigned his army commission and returned to his farm in Düringshof (Polish Bogdaniec in Gorzów Wielkopolski county). Zelewski enrolled with the border guards (Grenzschutz) the same year.

On 23 October 1925 he legally changed his surname to von dem Bach-Zelewski. In 1930 he left the Grenzschutz, joined the Nazi Party, and became a member of the SS in 1931. A rapid series of promotions over the next two years culminated in his promotion to the rank of Major General (SS-Brigadeführer) in late 1933. During this period he reportedly quarreled with his staff officer, Anton von Hohberg und Buchwald. In 1934 Bach-Zelewski received the The Honour Cross of the World War 1914/1918 (Ehrenkreuz).[2]

A source of considerable embarrassment for him was the fact that all three of his sisters had married Jewish men. After the war he claimed under interrogation that this had ruined his reputation in the army, forcing him to leave the Reichswehr. A Nazi Party member of the Reichstag from 1932–44, Bach-Zelewski participated in the Night of the Long Knives in 1934, using the opportunity to have his rival Buchwald murdered. From 1934 on he served as leader of SS main districts (SS-Oberabschnitten), initially in East Prussia and after 1936 in Silesia. In 1937 he was named Senior SS and Police Leader (HSSPF) in Silesia, and also served as Commander of SS main district South East (SS-Oberabschnitt Südost).[citation needed]

Bach-Zelewski did not participate in the invasion of Poland personally, although the units under his command took part in reprisal actions and the shooting of POWs in the course of the September campaign[citation needed]. In November 1939 SS chief Heinrich Himmler offered him the post of Commissioner for the Strengthening of Germandom in Silesia. His duties included mass resettlement and the confiscation of Polish private property. By August 1940 some 18,000–20,000 Poles from Żywiec County were forced to leave their homes in what became known as the Action Saybusch (German name for Żywiec).[5]

Bach-Zelewski provided the initial impetus for the building of Auschwitz concentration camp[citation needed] at the former Austrian artillery barracks in the Zasole suburb of Oświęcim due to overcrowding of prisons. The location was scouted by his subordinate Oberführer Arpad Wigand. The first transport arrived at KL Auschwitz on 14 June 1940, and two weeks later Bach-Zelewski personally visited the camp.[6] In June 1941 he resumed his duties as HSSPF in Silesia. 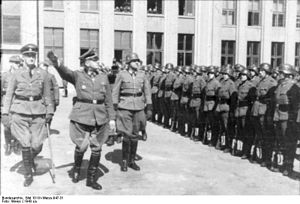 During Operation Barbarossa Bach-Zelewski served as HSSPF in the territory of Belarus, extending to the Ural Mountains. From July to September 1941 he oversaw the extermination of Jews in Riga and Minsk by the Einsatzgruppe B, led by Arthur Nebe. In February 1942 he was hospitalized in Berlin for treatment of "intestinal ailments", and was described as suffering from "hallucinations connected with the shooting of Jews".[7] Before resuming his post in July,[8] Bach-Zelewski petitioned Himmler for reassignment to anti-partisan warfare duty.[9]

In June 1942 Reinhard Heydrich, leader of the Reich Protectorate of Bohemia and Moravia, was assassinated in Prague. Hitler chose Bach-Zelewski as his replacement, but Himmler protested that he could not be spared due to the prevailing military situation. Hitler relented and appointed Kurt Daluege to the position. In July 1943 Bach-Zelewski became commander of the so-called "Bandenkampfverbände" ("Band-fighting Unit"), responsible for the mass murder of 35,000 civilians in Riga and more than 200,000 in Belarus and eastern Poland. He received a tentative appointment as HSSPF of Moscow, but the Wehrmacht failed to take the city.

Through 1943, Bach-Zelewski remained in command of "anti-partisan" units on the central front, a special command created by Hitler. He was the only HSSPF in the occupied Soviet territories to retain genuine authority over the police after Hans-Adolf Prützmann and Jeckeln lost theirs to the civil administration.[citation needed]

In July 1943 Bach-Zelewski received command of all anti-partisan actions in Belgium, Belarus, France, the General Government, the Netherlands, Norway, Ukraine, Yugoslavia, and parts of the Bezirk Bialystok. In practice, his activities remained confined to Belarus and contiguous parts of Russia.[citation needed]

Bach-Zelewski's tactics produced a high civilian death toll and relatively minor military gains. In fighting irregular battles with the partisans, his units slaughtered civilians in order to inflate the figures of "enemy losses"; indeed, far more fatalities were usually reported than weapons captured. The German troops would encircle areas controlled by the partisans in a manner both time-consuming and conspicuous, allowing the real enemy to slip away. After an operation was completed, no permanent military presence was maintained, which gave the partisans a chance to resume where they had left off. Even when successful in pacification actions, Bach-Zelewski usually accomplished little more than to force the real enemy to relocate and multiply their numbers with civilians enraged by the massacres.[10]

In early 1944, he took part in front-line fighting in the Kovel area, but in March he had to return to Germany for medical treatment. Himmler assumed all his posts.[citation needed] 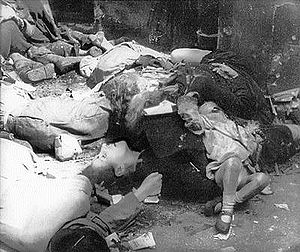 Film footage taken by the Polish Underground showing the bodies of women and children murdered by SS troops in the Warsaw Uprising, August 1944.

On 2 August 1944, Bach-Zelewski took command of all German troops fighting Bor-Komorowski's Home Army that had staged the Warsaw Uprising. The German forces were made up of 17,000 men arranged in two battle groups: under Hanns von Rohr, and under Reinefarth – the latter included the Dirlewanger Brigade of convicted criminals.[11] This command group was named after Bach-Zelewski, as Korpsgruppe Bach. Units under his command killed approximately 200,000 civilians (more than 65,000 in mass executions) and an unknown number of POWs.[11]

After more than two months of heavy fighting and the total destruction of Warsaw, Bach-Zelewski managed to take control of the city, committing atrocities in the process, notably the Wola massacre.[12] For his exploits in Warsaw, Bach-Zelewski was awarded the Knight's Cross of the Iron Cross on 30 September 1944 and was mentioned in the Wehrmachtbericht, a propaganda radio report, on 1 October 1944.[13] Incidentally, during the slaughter and razing of Warsaw, he is alleged to have personally saved Fryderyk Chopin's heart, by taking it for his own collection of curiosities. The recovered heart is held at a Warsaw church.[14] Between 26 January and 10 February 1945, Bach-Zelewski commanded X SS Armeekorps, one of the "paper-corps", in Germany, but this unit was annihilated after less than two weeks.[citation needed]

Bach-Zelewski went into hiding and tried to leave the country. However, US military police arrested him on 1 August 1945. In exchange for his testimony against his former superiors at the Nuremberg Trials[citation needed], Bach-Zelewski never faced trial for any war crimes. Similarly, he never faced extradition to Poland or to the USSR. During his testimony at the Nuremberg Trials, Bach-Zelewski stated that he disapproved of Himmler's aim to exterminate 30 million Slavs.[15] He left prison in 1949. In 1951, Bach-Zelewski claimed that he had helped Hermann Göring commit suicide in 1946. As evidence, he produced cyanide capsules to the authorities with serial numbers not far removed from the one used by Göring. The authorities never verified Bach-Zelewski's claim, however, and did not charge him with aiding Göring's death. Most modern historians dismiss Bach-Zelewski's claim and agree that a U.S. Army contact within the Palace of Justice's prison at Nuremberg most likely aided Göring in his suicide.[16] In 1951, Bach-Zelewski was sentenced to 10 years in a labor camp for the murder of political opponents in the early 1930s; however, he did not serve prison time until 1958, when he was convicted of killing Anton von Hohberg und Buchwald, a Sturmabteilung officer, during the Night of the Long Knives, and was sentenced to four and a half years imprisonment.[17]

In 1961, Bach-Zelewski was sentenced to an additional 10 years in home custody for the murder of 10 German Communists in the early 1930s. None of the sentences referred to his role in Poland, in the Soviet Union, or his participation in the Holocaust, although he openly denounced himself as a mass murderer.[8] Bach-Zelewski died in a Munich prison on 8 March 1972, a week after his 73rd birthday.

Bach-Zelewski gave evidence for the defence at the trial of Adolf Eichmann in Israel in May 1961. His evidence was to the effect that operations in Russia and parts of Poland were conducted by Operations Units of the Security Police and were not subject to the orders of Eichmann's office, nor was Eichmann able to give orders to the officers in charge of these units, who were responsible for the murder of Jews and Gypsies. The evidence was provided at a hearing in Nuremberg in May 1961.[18]