Erlangen-Höchstadt is a district in Bavaria, Germany. It is bounded by (from the south and clockwise) the districts of Fürth, Neustadt (Aisch)-Bad Windsheim, Bamberg, Forchheim and Nürnberger Land, and by the cities of Nuremberg and Erlangen. The city of Erlangen is not part of the district, but nonetheless its administrative seat. 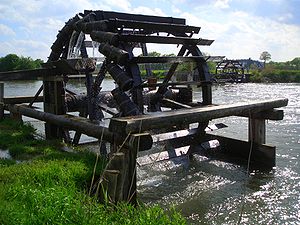 Waterwheel in the Regnitz near Möhrendorf.

The earliest extant documents are drawings from 1413 which show water wheels along the Regnitz. The first (1449–1450) and second (1552–1555) Margrave wars, Brandenburg versus Nuremberg, devastated the countryside.

In 1715 a lock was placed in the Regnitz river at Hemhofen. The highpoint of waterwheel usage was in the early 19th century when more than 190 were in use between Fuerth and Forchheim.

The district was established in 1972 by merging the former districts of Erlangen and Höchstadt.

The main river is the Regnitz, which runs through the city of Erlangen. Lands west of the river are covered with several hundred tiny lakes on both sides of the Aisch. The Aisch is an affluent of the Regnitz, running from southwest to east. East of the river the country is rising to the hills of the northern Frankish Alb.