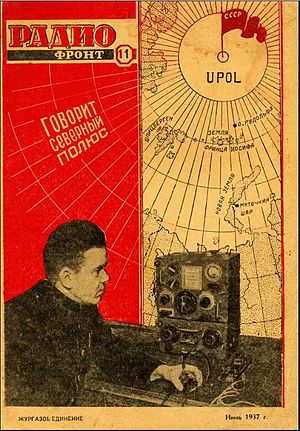 E. Krenkel as Polar radio operator on the cover of Radiofront magazine. 1937

Krenkel was born in Białystok,[citation needed] now Poland, to a German family.

Ernst Krenkel was a radioman on polar stations

He took part in Arctic expeditions on the Graf Zeppelin airship (1931), icebreaker Sibiryakov, steamship SS Chelyuskin (1933–1934, callsign RAEM). He was also a radioman on the first drifting ice station North Pole-1 (1937-1938, callsign UPOL).[2] He is known to have set a world record by establishing a long-distance radio communication between Franz Josef Land and Antarctica.

In 1938, Krenkel went on to work for Glavsevmorput. Later in his life he was employed in the radio industry. In 1951, he was hired by the scientific research institute of hydrometeorological instrument-making, becoming its director in 1969.

He wrote a book of memoirs entitled My Callsign is RAEM (Russian: RAEM - мои позывные).

Ernst died in 1971 and was interred at the Novodevichy Cemetery.