Ernst Friedrich Ferdinand Zermelo (German: [ʦɛrˈmeːlo]; 27 July 1871 – 21 May 1953) was a German logician and mathematician, whose work has major implications for the foundations of mathematics.[citation needed] He is known for his role in developing Zermelo–Fraenkel axiomatic set theory and his proof of the well-ordering theorem. 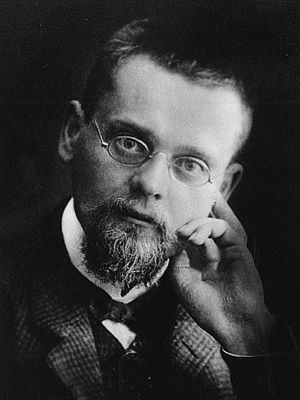 Ernst Zermelo graduated from Berlin's Luisenstädtisches Gymnasium in 1889. He then studied mathematics, physics and philosophy at the universities of Berlin, Halle and Freiburg. He finished his doctorate in 1894 at the University of Berlin, awarded for a dissertation on the calculus of variations (Untersuchungen zur Variationsrechnung). Zermelo remained at the University of Berlin, where he was appointed assistant to Planck, under whose guidance he began to study hydrodynamics. In 1897, Zermelo went to Göttingen, at that time the leading centre for mathematical research in the world, where he completed his habilitation thesis in 1899.

In 1910, Zermelo left Göttingen upon being appointed to the chair of mathematics at Zurich University, which he resigned in 1916. He was appointed to an honorary chair at Freiburg im Breisgau in 1926, which he resigned in 1935 because he disapproved of Adolf Hitler's regime. At the end of World War II and at his request, Zermelo was reinstated to his honorary position in Freiburg.

In 1900, in the Paris conference of the International Congress of Mathematicians, David Hilbert challenged the mathematical community with his famous Hilbert's problems, a list of 23 unsolved fundamental questions which mathematicians should attack during the coming century. The first of these, a problem of set theory, was the continuum hypothesis introduced by Cantor in 1878, and in the course of its statement Hilbert mentioned also the need to prove the well-ordering theorem.

Zermelo began to work on the problems of set theory under Hilbert's influence and in 1902 published his first work concerning the addition of transfinite cardinals. By that time he had also discovered the so-called Russell paradox. In 1904, he succeeded in taking the first step suggested by Hilbert towards the continuum hypothesis when he proved the well-ordering theorem (every set can be well ordered). This result brought fame to Zermelo, who was appointed Professor in Göttingen, in 1905. His proof of the well-ordering theorem, based on the powerset axiom and the axiom of choice, was not accepted by all mathematicians, mostly because the axiom of choice was a paradigm of non-constructive mathematics. In 1908, Zermelo succeeded in producing an improved proof making use of Dedekind's notion of the "chain" of a set, which became more widely accepted; this was mainly because that same year he also offered an axiomatization of set theory.

Zermelo began to axiomatize set theory in 1905; in 1908, he published his results despite his failure to prove the consistency of his axiomatic system. See the article on Zermelo set theory for an outline of this paper, together with the original axioms, with the original numbering.

Proposed in 1931, the Zermelo's navigation problem is a classic optimal control problem. The problem deals with a boat navigating on a body of water, originating from a point O to a destination point D. The boat is capable of a certain maximum speed, and we want to derive the best possible control to reach D in the least possible time.