Job Wilhelm Georg Erdmann Erwin von Witzleben (4 December 1881 – 8 August 1944) was a German officer, by 1940 in the rank of Generalfeldmarschall (General Field Marshal), and army commander in the Second World War. A leading conspirator in the 20 July plot,[1] he was designated to become Commander-in-Chief of the Wehrmacht in a post-Nazi regime had the plot succeeded

He completed the Prussian Cadet Corps program in Wahlstatt, Silesia and in Lichterfelde near Berlin, and on 22 June 1901 joined the Grenadier Regiment König Wilhelm I No. 7 in Liegnitz, Silesia (now Legnica, Poland) as a Leutnant (lieutenant). In 1910, he was promoted to Oberleutnant (first lieutenant).

He was married to Else Kleeberg from Chemnitz, Saxony. The couple had a son and a daughter.

At the beginning of the First World War, Witzleben served as brigade adjutant in the 19th Reserve Infantry Brigade before being promoted to Hauptmann and company chief in the Reserve Infantry Regiment no. 6 in October 1914. Later, in the same regiment, he became battalion commander. His unit fought in Verdun, the Champagne[disambiguation needed] region and Flanders, among other places. He was seriously wounded and was awarded the Iron Cross, both first and second classes. Afterwards, he was sent to General Staff training and witnessed the war end as First General Staff Officer of the 121st Division.

In the Reichswehr of the Weimar Republic, Witzleben was promoted to company commander. In 1923, he found himself on the Fourth Division staff in Dresden as a Major. In 1928, he became battalion commander in Infantry Regiment No. 6 and retained that position as Oberstleutnant (lieutenant colonel) the following year. After being promoted to full Oberst (colonel) in 1931, he took over as commanding officer of the (Prussian) Infantry Regiment No. 8 in Frankfurt on the Oder.

Early in 1933 came a transfer to the post of Infantry Leader VI in Hanover. He was promoted to Generalmajor (major general) on 1 February 1934 and moved to Potsdam as the new commander of the Third Infantry Division. He succeeded General Werner von Fritsch as commander of Military District (Wehrkreis) III - Berlin (including Brandenburg and part of Neumark). In this position, he was promoted to Generalleutnant (lieutenant general) and in the newly established Wehrmacht forces became commanding general of Army Corps III in Berlin in September 1935. In 1936, he was promoted to a General of the Infantry (General der Infanterie).

As early as 1934, Witzleben had come out against the Nazi regime when he and Manstein, Leeb, and Rundstedt demanded an inquiry into Schleicher's and Bredow's deaths in the Night of the Long Knives. As a result of this and also his criticism of Hitler's persecution of Fritsch in the Blomberg–Fritsch Affair, Witzleben was temporarily forced into early retirement. His "retirement" did not last, however, as Hitler would soon need him in the preparations for the Second World War.

By 1938, Witzleben was a member of the Oster Conspiracy, a group of plotters including Generaloberst (Colonel General) Ludwig Beck, Generals Erich Hoepner and Carl-Heinrich von Stülpnagel, Admiral and Chief of the Abwehr Wilhelm Canaris and Abwehr Oberstleutnant (lieutenant colonel) Hans Oster. These men planned to overthrow Hitler in a military coup d'état which seemed feasible at the time of the 1938 Sudeten Crisis — until the Munich Agreement defused the crisis, temporarily averting war. Although the Agreement was seen internationally as a victory for Hitler, the Nazi Führer privately resented this interference of British Prime Minister Neville Chamberlain in his plans for war. Witzleben's command, including the key Berlin Defense District, was to have played a decisive role in the planned coup.

In November 1938, Witzleben had been installed as commander-in-chief of Army Group 2 in Frankfurt. He was also involved in Generaloberst Hammerstein-Equord's conspiracy plans of 1939. The latter planned to seize Hitler outright in a kind of frontal assault while the former would shut down Nazi party headquarters, but this plan also fell through.

In September 1939, Witzleben, now a Generaloberst (Colonel General), took command of the 1st Army, stationed at the Western Front. When Germany attacked France on 10 May 1940, the First Army was part of Army Group C. On 14 June it broke through the Maginot line, and within three days had forced several French divisions to surrender. For this, Witzleben was decorated with the Knight's Cross of the Iron Cross; and on 19 July, he was promoted to Generalfeldmarschall (General Field Marshal) during the 1940 Field Marshal Ceremony.

In 1941 he was even appointed Commander-in-Chief OB West, succeeding Generalfeldmarschall Gerd von Rundstedt, but only a year later he took leave from this position for health reasons. Some sources, however, claim he was again forcibly retired at this time after criticizing the regime for its invasion of the Soviet Union on 22 June 1941 in Operation Barbarossa.

In 1944, the conspirators around Stauffenberg saw Witzleben as the key man in their plans. Whereas Generaloberst (Colonel General) Beck was seen as a prospective provisional head of state, and Generaloberst Hoepner was in line to command the inner Ersatzheer ("Replacement Army") forces, Witzleben was to take over supreme command of the whole Wehrmacht as the highest-ranking German officer.

However, on 20 July 1944, the day of Stauffenberg's attempt on Hitler's life at the Wolf's Lair in East Prussia, Witzleben did not arrive at the Bendlerblock in Berlin from the OKH-HQ (Oberkommando des Heeres Headquarters) at Zossen to assume command of the coup forces until 8 pm, when it was already clear that the coup attempt had failed. He then protested angrily that it had been bungled and left after 45 minutes to return to Zossen, where he reported the situation to General of the Artillery (General der Artillerie) Eduard Wagner and then drove back to his country estate 30 miles away where he was arrested the next day by Generalleutnant (Lieutenant General) Viktor Linnarz of the OKH personnel office.

He was then cast out of the Wehrmacht by the so-called Ehrenhof der Wehrmacht ("The Regular Army's Court of Honor"), a conclave of officers set up after the attempted assassination to remove officers from the Wehrmacht who had been involved in the plot, mainly so that they were no longer subject to German military law and could be arraigned to a show-trial before the infamous Nazi "People's Court" (Volksgerichtshof). 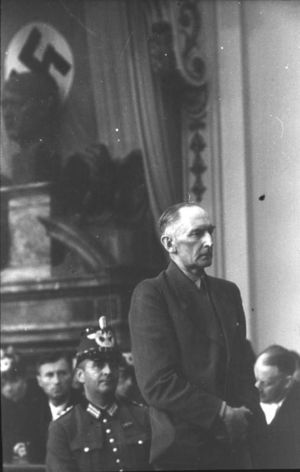 On 7 August 1944, Witzleben was in the first group of accused conspirators to be brought before the Volksgerichtshof. Ravaged by the conditions of his Gestapo arrest, he surprisingly approached the bench giving the Nazi salute,[2] for which he was rebuked by the presiding judge Roland Freisler.

Witzleben was sentenced to death on the same day. Witzleben's closing words in court, addressed to Freisler, were:

Much of the Volksgerichtshof, including scenes of Witzleben's "trial," was filmed for the German weekly newsreel Die Deutsche Wochenschau; however, Propaganda Minister Joseph Goebbels decided against releasing the footage, firstly because Freisler's vituperative, insulting verbiage in the courtroom might draw sympathy for the accused, and secondly because the regime wanted to quell public discussion of the event. The material was classified as secret (Geheime Reichssache).

Witzleben was put to death that same day at Plötzensee Prison in Berlin. By Hitler's direct orders, he was hanged with a thin hemp rope[3] (which people who were not from the prison staff called a piano wire) wound around a meat hook, and the execution was filmed.[4][5] The footage has since been lost.