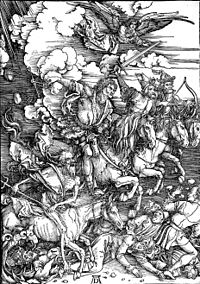 Four Horsemen of the Apocalypse by Albrecht Dürer

i/ˌɛskəˈtɒlədʒi/ is a part of theology concerned with the final events of history, or the ultimate destiny of humanity. This concept is commonly referred to as the "end of the world" or "end time".

The word arises from the Greek ἔσχατος eschatos meaning "last" and -logy meaning "the study of", first used in English around 1550.[1] The Oxford English Dictionary defines eschatology as "The department of theological science concerned with ‘the four last things: death, judgment, heaven and hell’."[2]

In the context of mysticism, the phrase refers metaphorically to the end of ordinary reality and reunion with the Divine. In many religions it is taught as an existing future event prophesied in sacred texts or folklore. More broadly, eschatology may encompass related concepts such as the Messiah or Messianic Age, the end time, and the end of days.

History is often divided into "ages" (aeons), which are time periods each with certain commonalities. One age comes to an end and a new age or world to come, where different realities are present, begins. When such transitions from one age to another are the subject of eschatological discussion, the phrase, "end of the world", is replaced by "end of the age", "end of an era", or "end of life as we know it". Much apocalyptic fiction does not deal with the "end of time" but rather with the end of a certain period of time, the end of life as it is now, and the beginning of a new period of time. It is usually a crisis that brings an end to current reality and ushers in a new way of living, thinking, or being. This crisis may take the form of the intervention of a deity in history, a war, a change in the environment, or the reaching of a new level of consciousness.

Most modern eschatology and apocalypticism, both religious and secular, involve the violent disruption or destruction of the world; whereas Christian and Jewish eschatologies view the end times as the consummation or perfection of God's creation of the world. For example, according to ancient Hebrew belief, life takes a linear (and not cyclical) path; the world began with God and is constantly headed toward God’s final goal for creation, which is the world to come.

Eschatologies vary as to their degree of optimism or pessimism about the future. In some eschatologies, conditions are better for some and worse for others, e.g. "heaven and hell".

In Bahá'í belief, creation has neither a beginning nor an end.[3] Instead, the eschatology of other religions is viewed as symbolic. In Bahá'í belief, human time is marked by a series of progressive revelations in which successive messengers or prophets come from God.[4] The coming of each of these messengers is seen as the day of judgment to the adherents of the previous religion, who may choose to accept the new messenger and enter the "heaven" of belief, or denounce the new messenger and enter the "hell" of denial. In this view, the terms "heaven" and "hell" are seen as symbolic terms for the person's spiritual progress and their nearness to or distance from God.[4] In Bahá'í belief, the coming of Bahá'u'lláh, the founder of the Bahá'í Faith, signals the fulfilment of previous eschatological expectations of Islam, Christianity and other major religions.[5]

Christian eschatology is concerned with death, an intermediate state, Heaven, hell, the return of Jesus, and the resurrection of the dead. Several evangelical denominations include a rapture, a great tribulation, the Millennium, end of the world, the last judgment, a new heaven and a new earth (the World to Come), and the ultimate consummation of all of God's purposes. Eschatological passages are found in many places, esp. Isaiah, Daniel, Ezekiel, Matthew 24, The Sheep and the Goats, and the Book of Revelation, but Revelation often occupies a central place in Christian eschatology.

The Second Coming of Christ is the central event in Christian eschatology. Most Christians believe that death and suffering will continue to exist until Christ's return. There are, however, various views concerning the order and significance of other eschatological events.

The book of Revelation is at the core of Christian eschatology. The study of Revelation is usually divided into four approaches. In the Futurist approach, Revelation is chiefly seen as referring to events which as yet have not come to pass, but which will come to pass at the end of the age, and the end of the world. This is the approach which most applies to eschatological studies. In the Preterist approach, Revelation chiefly refers to the events of the first century, such as the struggle of Christianity to survive the persecutions of the Roman Empire, the fall of Jerusalem in 70 AD, and the desecration of the temple in the same year. In the Historicist approach, Revelation provides a broad view of history, and passages in Revelation are identified with major historical people and events. In the Idealist (or Spiritualist or Symbolic) approach, the events of Revelation are neither past nor future, but are purely symbolic, dealing with the ongoing struggle and ultimate triumph of good over evil.

Contemporary Hindu eschatology is linked in the Vaishnavite tradition to the figure of Kalki, the tenth and last avatar of Vishnu before the age draws to a close who will reincarnate as Shiva simultaneously dissolves and regenerates the universe.

Most Hindus believe that the current period is the Kali Yuga, the last of four Yuga that make up the current age. Each period has seen successive degeneration in the moral order, to the point that in the Kali Yuga quarrel and hypocrisy are the norm. In Hinduism, time is cyclic, consisting of cycles or "kalpas". Each kalpa lasts 4.1 - 8.2 billion years, which is a period of one full day and night for Brahma, who in turn will live for 311 trillion, 40 billion years. The cycle of birth, growth, decay, and renewal at the individual level finds its echo in the cosmic order, yet is affected by vagaries of divine intervention in Vaishnavite belief. Some Shaivites hold the view that Shiva is incessantly destroying and creating the world.

After this larger cycle, all of creation will contract to a singularity and then again will expand from that single point, as the ages continue in a religious fractal pattern.[6]

Signs preceding the Day of Judgement in the Qur'an

The best source of information is the Qur'an which describes the following Signs preceding the Day of Judgement:

According to the other sources

Regarding the Major Signs, a Companion of the Prophet narrated: "Once we were sitting together and talking amongst ourselves when the Prophet appeared. He asked us what it was we were discussing. We said it was the Day of Judgment. He said: 'It will not be called until ten signs have appeared: Smoke, Dajjal (the Antichrist), the creature (that will wound the people), the rising of the sun in the West, the Second Coming of Jesus, the emergence of Gog and Magog, and three sinkings (or cavings in of the earth): one in the East, another in the West and a third in the Arabian Peninsula.'" (note: the previous events were not listed in the chronological order of appearance)[citation needed]

Judaism addresses the end times in the Book of Daniel and numerous other prophetic passages in the Hebrew scriptures, and also in the Talmud, particularly Tractate Avodah Zarah.

Eschatology equivalents in science and philosophy

Researchers in futures studies and transhumanists investigate how the accelerating rate of scientific progress may lead to a "technological singularity" in the future that would profoundly and unpredictably change the course of human history, and result in Homo sapiens no longer being the dominant life form on Earth.[10][11] The philosopher and Institute for Ethics and Emerging Technologies scholar Phil Torres has called this new branch "secular eschatology".[12]

A diagram showing the life cycle of the Sun
See also: Future of the Earth, Future of an expanding universe, and Ultimate fate of the universe

The Sun will turn into a red giant in approximately 5 billion years. This red giant Sun will have a maximum radius beyond the Earth's current orbit. Life on Earth will become impossible due to a rise in temperature long before the planet is actually swallowed up by the Sun.[13]