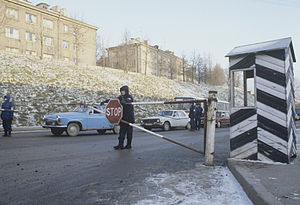 Traffic at the newly installed customs office in Narva, December 1991

The Estonia–Russia border is the international border between Estonia and Russia. The border is 294 kilometres (183 mi) long. In its present form, it has not changed since 1945, when Estonia became part of the Soviet Union. A small change was to take place in 2014, but this has yet to take effect.[1]

Much of the border with Estonia is water, passing through the channel of the River Narva and Lake Peipsi, but in the south there is a land border, parts of which were disputed when Estonia joined the European Union and NATO. The agreement on the border between the two countries, recognizing that some territories are now in Russia, in the Pechory area of the Pskov Oblast and in the Leningrad Oblast, was signed in May 2005 and ratified by the Estonian parliament, but then Russia withdrew its signature from the treaty.[2] Russia and Estonia afterward signed a border treaty on February 17, 2014, making Estonia the last Baltic country to formalize its border with Russia.[3] As of January 2016, the treaty has not been ratified in either of the countries.[4]

The border towns of Narva (Estonia) and Ivangorod (Russia) are directly adjacent to each other. Both have a predominantly Russian-speaking population.

A border oddity was the road from Värska to Ulitina in Estonia, traditionally the only road to the Ulitina area, which goes through Russian territory for one kilometre of its length, an area called Saatse Boot. This road has no border control, but there is no connection to any other road in Russia. It is not permitted to stop or walk along the road. This border oddity will disappear after the 2014 agreement is implemented when the road will be in Estonia.[1]

Noteworthy is the sharp change in the direction of commerce before and after the establishment of the border. If at the beginning of the 1990s the population of the RSFSR drove out shopping in Estonia, it is now Estonian consumers actively bought in Russia and often resell goods in Estonia. Top commodities include sugar, cigarettes and gasoline. On the border operates two types of checkpoints : auto- pedestrian on Friendship Bridge (Narva - Ivangorod) and the Lake Peipus (since 2004) that exports to Estonia sand for construction.

Crossing the border is allowed only at border controls. Most people need a visa on one or both sides of the border.