From Infogalactic: the planetary knowledge core
Jump to: navigation, search
For other uses, see Eternity (disambiguation).
"Sempiternal" redirects here. For the album by Bring Me the Horizon, see Sempiternal (album). 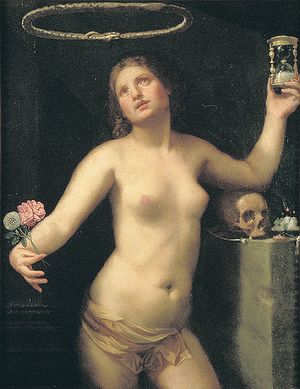 An allegorical painting of a woman, representing eternity. She holds an hourglass, a skull rests on the table beside her, and an Ouroboros floats above her head. All of these are common symbols of eternity.

Eternity in common parlance is either an infinite or an indeterminately long period of time. In classical philosophy, however, eternity is defined as what exists outside time while sempiternity is the concept that corresponds to the colloquial definition of eternity.

Eternity, or everlasting, is an important concept in many religions, where the immortality of God or the gods is said to endure eternally. Some, such as Aristotle, would say the same about the natural cosmos in regard to both past and future eternal duration, and like the eternal Platonic Forms, immutability was considered essential.[1]

The metaphysics of eternity studies that which necessarily exists outside or independently of space and time. Another important question is whether "information" or Form is separable from mind and matter. Aristotle established a distinction between actual infinity and a potentially infinite count: a future span of time must be a potential infinity, because another element can always be added to a series that is inexhaustible.[2]

Aristotle argued that the cosmos has no beginning. Euclid invoked this distinction instead of saying that there are an infinity of primes, rather that the primes outnumber those contained in any given collection thereof.[3]

In Aristotle's metaphysics, eternity is the unmoved mover (God), understood as the gradient of total synergy ("produces motion by being loved").[4] Boethius defined eternity as "simultaneously full and perfect possession of interminable life".[5]

Eternity is often symbolized by the image of a snake swallowing its own tail, known as the Ouroboros (or Uroboros). The circle is also commonly used as a symbol for eternity, as is the mathematical symbol of infinity, 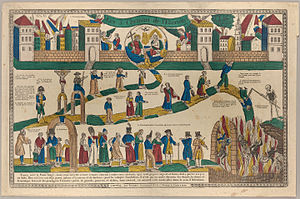 This folk-art allegorical map titled "The 3 Roads to Eternity" is based on Matthew 7:13-14 Bible Gateway by the woodcutter Georgin François in 1825.

Eternity is mentioned in religious texts.

For God so loved the world, that he gave his only begotten Son, that whosoever believeth in him should not perish, but have everlasting life. John 3:16 [6]

Hatred is never appeased by hatred in this world. By non-hatred alone is hatred appeased. This is a law eternal. Dhammapada, The pairs of Heedfulness [8]

The soul never takes birth and never dies at any time nor does it come into being again when the body is created. The soul is birthless, eternal, imperishable, and timeless and is never destroyed when the body is destroyed. 2:20[9]